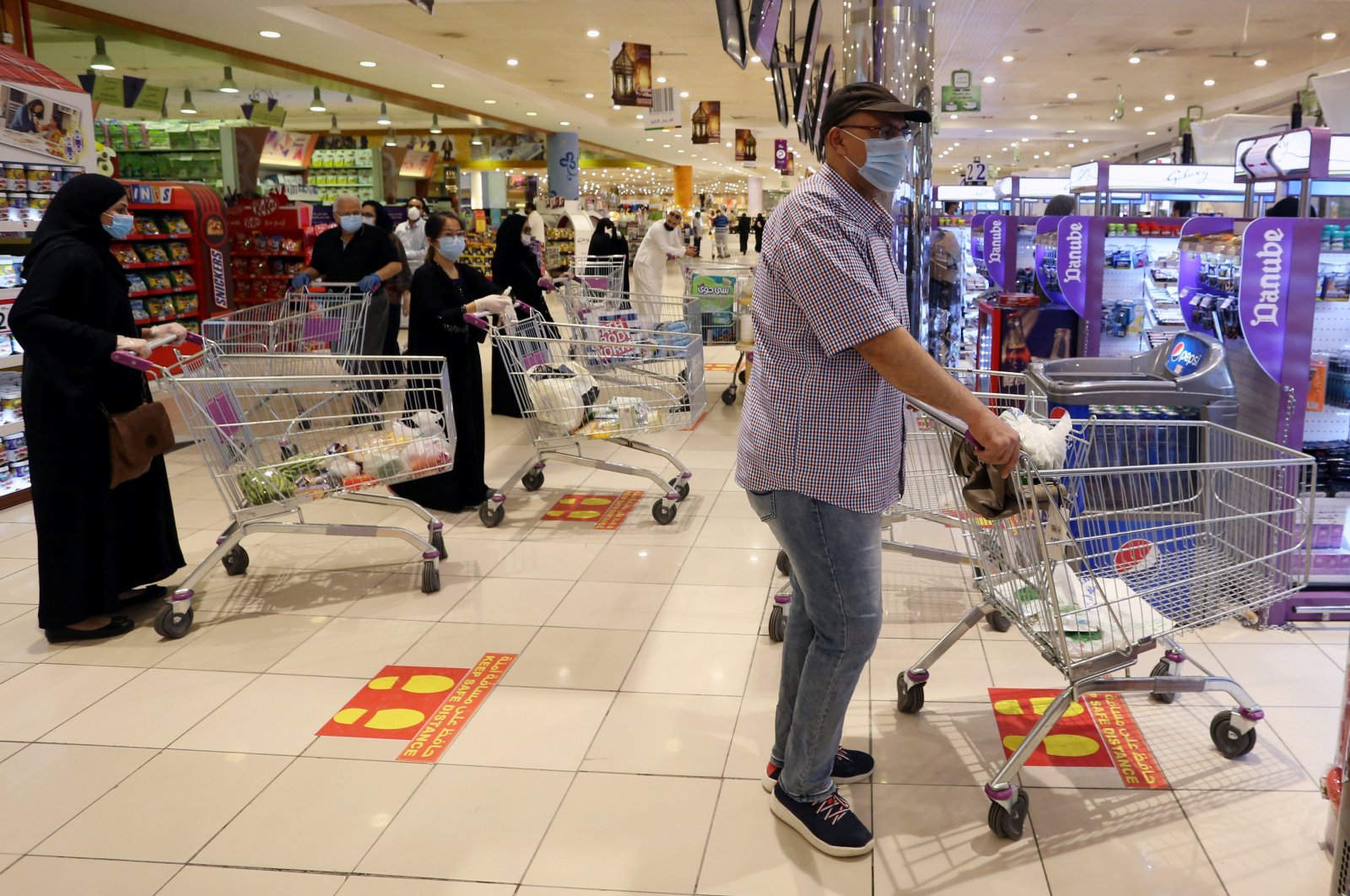 People follow social distancing markings as they line up at a shopping mall in Riyadh, Saudi Arabia, May 2, 2020. (Reuters Photo)
by DAILY SABAH WITH AGENCIES Oct 05, 2020 12:10 pm
RECOMMENDED

The head of Saudi Arabia’s Chambers of Commerce has called for a boycott of Turkish products amid reports from merchants that animosity between Ankara and Riyadh is hindering the flow of goods between the two regional powers.

"A boycott of everything Turkish, be it imports, investment or tourism, is the responsibility of every Saudi 'trader and consumer,' in response to the continued hostility of the Turkish government against our leadership, country and citizens," businessman Ajlan al-Ajlan tweeted Saturday.

"It will be for the best to focus on the deepening of trade between friendly nations and not fall for the atmosphere of fear that is being created," the trade adviser of the Turkish Embassy in Riyadh, Mehmet Mücahit Arvas, said in response to earlier reports on the boycott.

In a statement on Twitter on Friday, Arvas denied the embargo allegations, saying that the claims are not true, and it is "impossible to hinder trade as long as it is compliant with international law."

"There have been statements regarding Saudi Arabia officially imposing an embargo on Turkish goods. It has been settled with the Saudi authorities many times that there is no such embargo," he said.

Saudi Arabia and Turkey have been at odds and the escalating tensions between the two countries became more evident after the killing of dissident Saudi journalist Jamal Khashoggi at the kingdom's consulate in Istanbul in October 2018. Earlier this year the two countries blocked each other's news websites.

The Saudi Chambers of Commerce is a non-government group of private sector business people. The Saudi government’s communications office did not immediately respond to a request for comment.

For over a year, some Saudi and Turkish traders have speculated that Saudi Arabia was enacting an informal boycott of Turkish imports.

A Saudi importer told Reuters on condition of anonymity that containers he imported this year from Turkey lay for three months with customs before being released. He said customs officials informally advised him not to import directly from Turkey again.

Saudi authorities were on several occasions last year reported to have been deliberately holding Turkish trucks at the customs border without any justification. Trucks were allowed to enter after days of waiting.

A report in the Turkish media Friday cited that the world's biggest container ship and supply vessel operator Maersk is warning its customers about the risks of exporting goods to Saudi Arabia from Turkey and that they could be held at the customs.

It was said to have warned its customers by saying that the exports will be subjected to "slowing down in customs processes."

"Within the scope of this, there may happen long waits for the entrance of goods into the country and they may be left totally to the customs," the company said, adding that any expenses that may arise from the bureaucratic processes will fall upon the customer to pay if they take the risks and still decide to export their goods to the kingdom. "We advise our customers to take every precaution necessary," it noted.

Turkish opposition lawmaker Mehmet Güzelmansur said last week that goods, in particular, perishable fruit and vegetables, exported from his region of Hatay are held at the Saudi border for longer than necessary on arrival.

In comments reported in Turkish media and on his Twitter page, he said he was concerned that what he described as the partial, informal embargo by Saudi Arabia would be deepened.

Neither Turkish nor Saudi trade data show an unusually large drop in bilateral trade this year, taking into account the strains the coronavirus pandemic has placed on global commerce.

In the second quarter of this year, Turkey was Saudi Arabia’s 12th trade partner by total import value. In July, Saudi imports from Turkey were worth around $185 million (TL 1.4 billion), up from roughly $180 million in June.