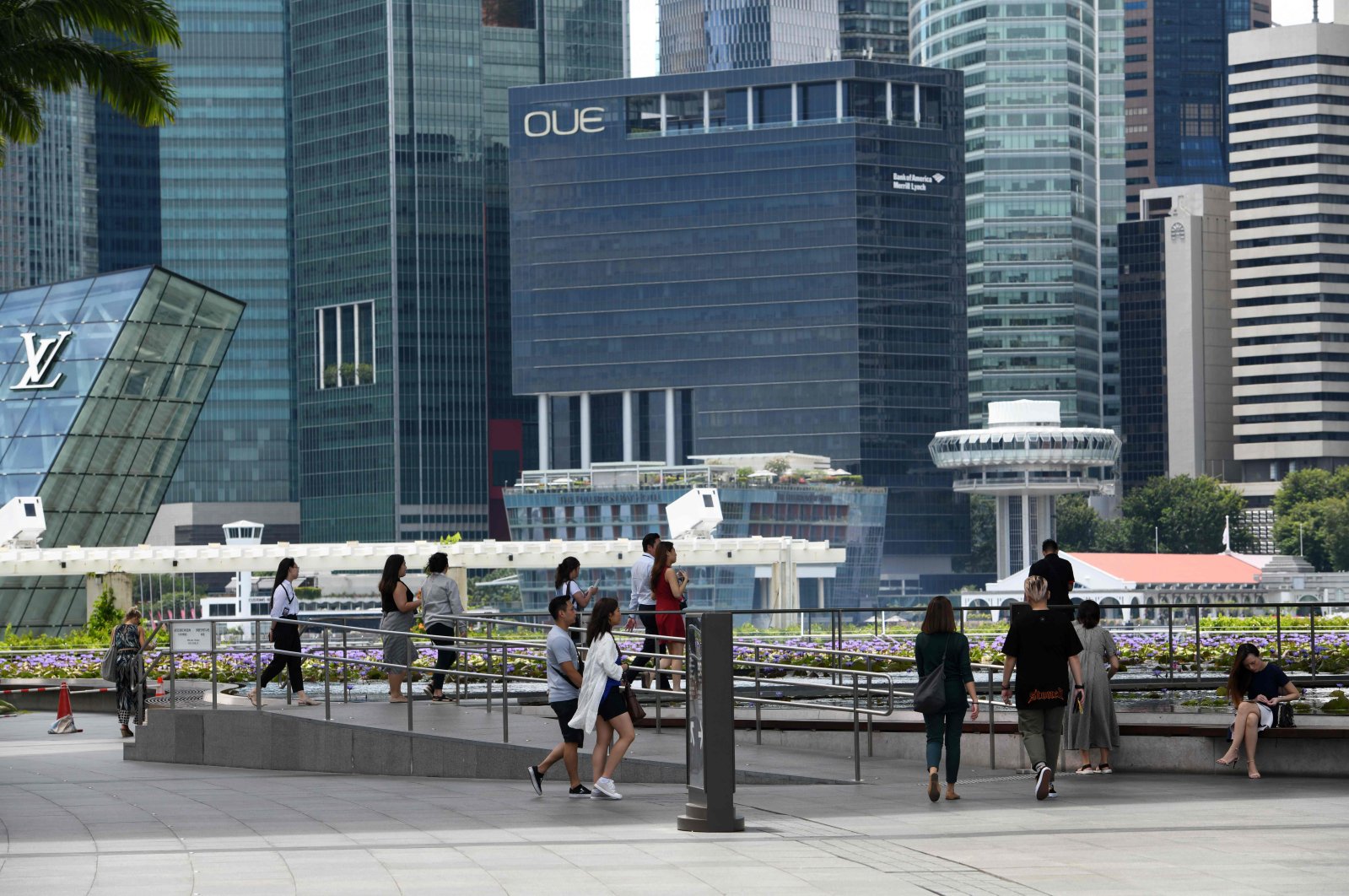 People walk near commercial buildings in the central business district in Singapore, Feb. 18, 2020. (AFP Photo)
by Compiled from Wire Services Mar 26, 2020 11:25 am
RECOMMENDED

Singapore said Thursday it was planning for a deep recession due to the coronavirus pandemic as its economy suffered the worst contraction in a decade in the first quarter, reinforcing fears global activity will slump sharply this year.

Singapore is among the world's most open economies and one of the first to have reported growth data since the virus spread from China earlier this year, portending more pain for other countries as they impose increasingly strict anti-virus measures.

Although Singapore has so far avoided the lockdowns seen in other nations, its economy shrunk by 2.2% in the first quarter compared to a year earlier, with heavy hits to services, construction and manufacturing, preliminary readings from the country's trade ministry showed.

The small Southeast Asian city-state is a major port, financial hub and tourist destination, making it a bellwether for global trade.

"COVID-19 is like an economic tsunami hitting Singapore's shores," said Selena Ling, head of research and strategy at the city-state's OCBC Bank.

The contraction was the biggest since the 2009 financial crisis and measured well above economists' expectations of a 1.5% decline. On a quarterly basis, gross domestic product (GDP) shrank 10.6%, the lowest since 2010 and below expectations for a 6.3% decline.

The data prompted the trade ministry to cut its 2020 GDP forecast range to -4% to -1%, from a previous range of -0.5% to 1.5%, and firmed up investors' bets for imminent fiscal and monetary stimulus.

"This could well be the worst recession ever on record for Singapore," said Irvin Seah, senior economist at Singapore's biggest bank DBS, predicting a 2.8% full-year contraction.

Highlighting the suddenness and severity of the shock, separate data on Thursday showed Singapore's industrial output plunged 22.3% in February from the previous month; marking the biggest contraction in official records going back to 1983, and far more than a forecast 11.5% fall.

Governments and central banks around the world have been unleashing unprecedented measures to battle the fallout from the pandemic, with U.S. Senate leaders agreeing on a $2 trillion deal for the hard-hit American economy.

Markets have been in a tailspin as the pandemic has spread, with more than 20,000 deaths reported worldwide and all eyes are on data to be released in the U.S. later Thursday expected to show a surge in people applying for unemployment benefits.

Singapore's latest growth data "is like the canary in the mineshaft, and warns of further economic pain to come for other Asian economies," said OCBC Bank's Ling.

"As the global COVID-19 situation is still evolving rapidly, there remains a significant degree of uncertainty over the severity and duration of the global outbreak, and the trajectory of the global economic recovery once the outbreak has been contained," the trade ministry said in a statement. "The balance of risks, however, is tilted to the downside," it added.

Even before the virus outbreak, Singapore's economy was already being hammered by the U.S.-China trade war.

Singapore normally gives advanced estimates before its quarter ends, but the figures do not cover the full period, meaning a revised reading, to be released later, may be even worse.

Like many other places, Singapore has taken steps to contain the pandemic, including banning all foreign arrivals and closing bars and other entertainment venues.

But it has reported a relatively low number of cases – 631 infections, with two deaths – and has held off imposing a total lockdown so far.

The government has been lauded for its response to the outbreak, although the city is now seeing a surge in imported cases as Singaporeans and residents return from other hard-hit countries.