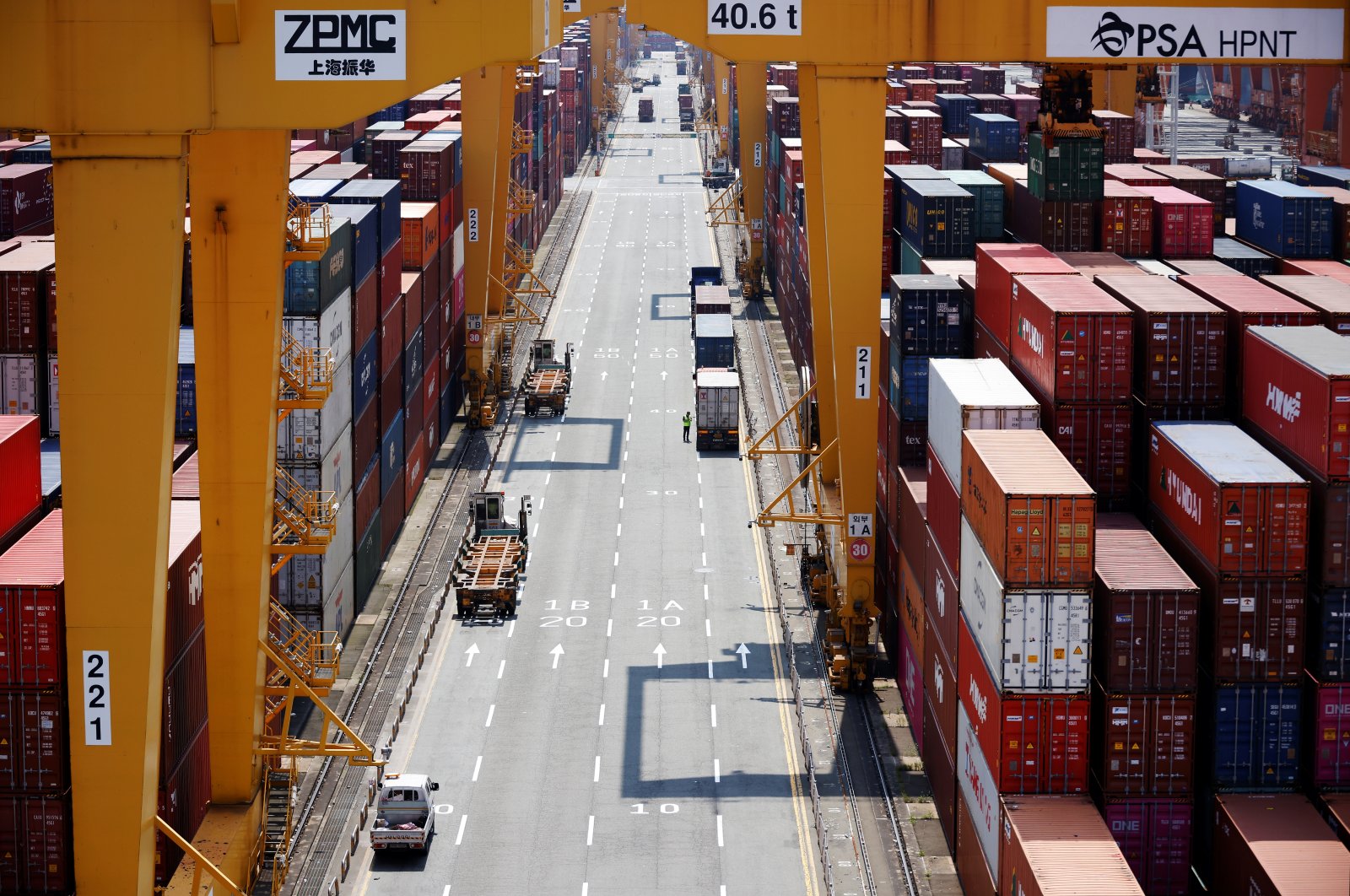 A truck driver stands next to his truck as he gets ready to transport a shipping container at Pusan Newport Terminal in Busan, South Korea, July 1, 2021. (Reuters Photo)
by REUTERS Jul 12, 2021 12:20 pm
RECOMMENDED

Unable to get a slot on a container vessel, Lee Sang-hoon is considering using fishing trawlers docked for repair in the South Korean port of Busan to meet surging export orders for the car engine oil he sells to Russia.

"China is the black hole in this shipping crisis, all the carriers are headed there," said Lee, owner of Dongkwang International Co. in Busan which makes about 20 billion won ($17.60 million) in annual revenue.

"Those fishing boats out there could be an answer for us because we're already one month behind schedule. That is, if we can iron out packaging issues," Lee said, pointing out to empty fishing trawlers visible from his Busan office.

Booking trawlers is one way businesses in the world's seventh-largest exporting nation are trying to overcome critical bottlenecks caused by the pandemic, particularly a shortage of shipping containers.

Thousands of exporters like Dongkwang are struggling to move their goods through Busan, the world's seventh busiest container port, where terminals handle over 59,000 containers daily to process about 75% of all shipping for the country.

As global carriers race to deliver everything from furniture to toys to U.S. and European consumers, they prioritize much larger batches of cargo waiting to be picked up along China's factory belt over Busan. That leaves fewer vessels in the Korean port and a glut of them in China, cargo managers at Busan's terminals said.

"As many (ships) depart from China where factories are mostly fully in operation, there's little vessel space left by the time they stop in Busan," said Lee Eung-hyuk, a marketing director at Busan Port Authority.

Some do not stop in Busan at all. The number of incoming container ships in Busan fell almost 10% through May this year even as exports soared 23.4% from a year earlier, according to data from the port authority, resulting in a very uneven recovery for Asia's fourth-largest economy.

On a real-time map of the world's major vessels at a control tower operated by HMM Co, the country's biggest container carrier, most of the red and yellow dots show its alliance fleet concentrated around China and Singapore, not Korea.

While the shipping squeeze caused by the pandemic is a global problem, the congestion at a transit hub like Busan has made things worse for smaller Korean exporters.

When Yantian, one of China's busiest ports, was partially shut down in June to control virus cases, some cargo was diverted to neighboring ports such as Busan, worsening the backlogs and periodic delays.

"It's a transit hub with so many in and outs. We need to ship 30 containers a month but have only been able to secure about 70% to 80% of that," said Lee at Dongkwang International, adding that his company recently raised prices due to higher shipping costs.

Carriers sometimes refuse to accept bookings at all, or force customers to accept much higher spot rates, according to Lee.

The pain is most acutely felt on less-popular routes smaller firms often use, making shipping rates from Busan to Vladivostok rise faster than to the U.S. West Coast, for example.

Dongkwang currently pays $2,200 per twenty-foot equivalent units (TEU) for the route, up about six times from a year earlier.

For South Korea's larger industrials like Samsung and LG, the shipping squeeze isn't as dire because carriers tend to prioritize orders from customers with deep pockets and a larger volume of goods to be shipped.

At one of the five new terminals, outbound containers full of goods were stacked to their vertical limits.

Transit vessels carrying thousands of containers were being unloaded by automated cranes, which use artificial intelligence to find space for the steel boxes.

Every 10 seconds, a truck carrying a 20-foot or 40-foot container passes through the gate, taking them to warehouses that already seem bursting at the seams.

"When port closures or other hiccups happen, it doesn't just mean a detour for vessels, it leads to a huge pileup of cargo the ship was due to pick up for exports half a world away," one field officer said, looking at "metal mountains" at the port.

At the retail level, businesses are either cutting production volume or raising prices, or both.

"We plan to raise prices by about 3% to 5% in Germany and other European countries in July, and something similar is in review for the U.S. market in August," a Hankook official said.

The bottleneck has also affected Korean consumers with fast-food chain Lotteria replacing french fries with cheese sticks due to issues bringing in potatoes.

The squeeze has created some winners, with HMM shares jumping 12-fold from early 2020 and more growth expected.

"Global container volume is growing. Our peak season usually is the third quarter but as exporters are squeezed, we expect the trend to last through the fourth quarter," said an official at HMM.