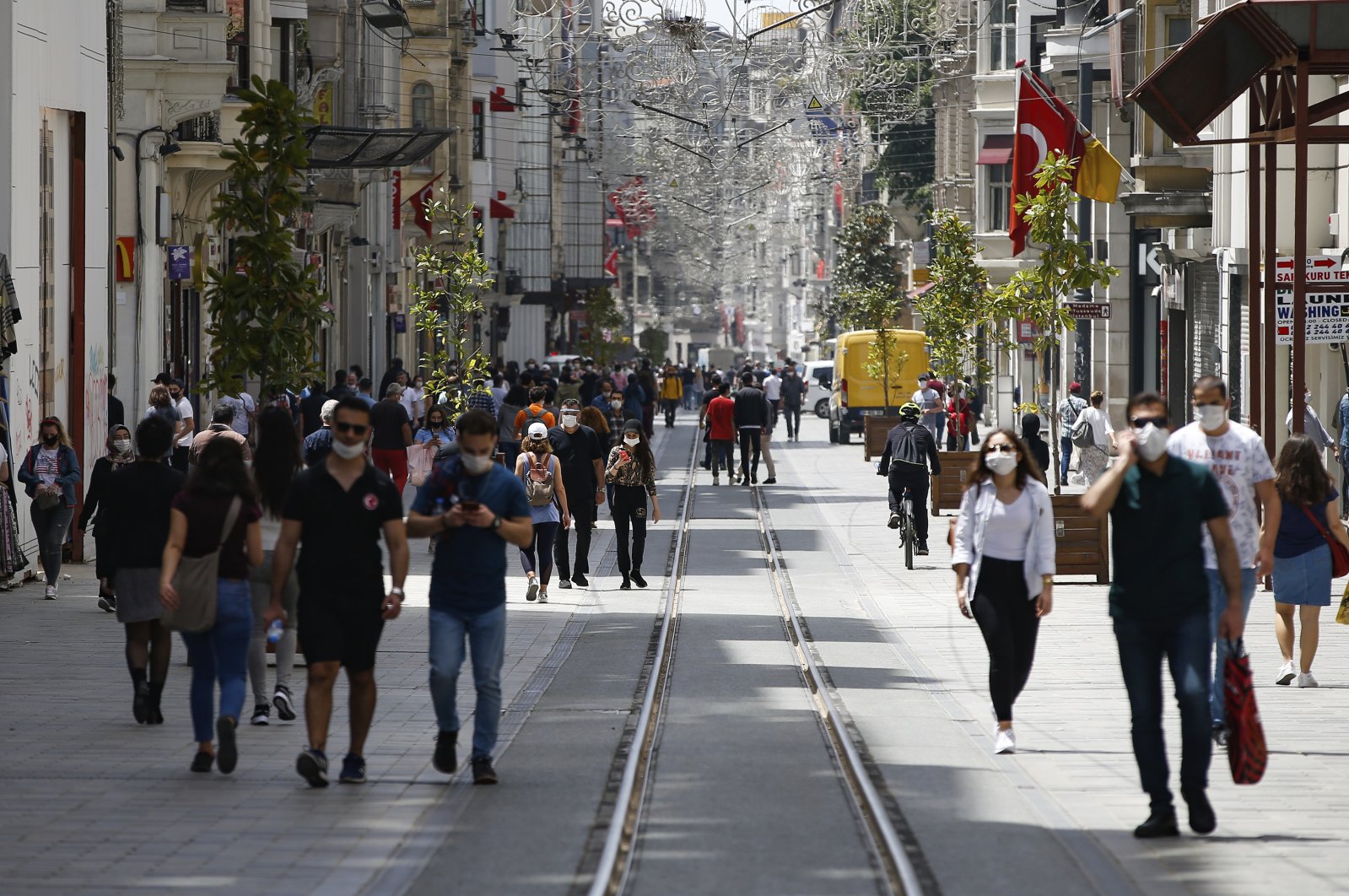 People walk on Istiklal Avenue, one of the main shopping streets in Istanbul, Turkey, during the coronavirus outbreak, May 15, 2020. (AP Photo)
by DAILY SABAH WITH AGENCIES Jun 09, 2020 9:29 pm

The employment shield package specifically aims to ensure the employment of young people under 25, while support is also on the way for industries to revive export- and production-oriented growth

The Turkish government will provide incentives to boost employment and will support industry to maintain export- and production-oriented growth to revive the economy amid the coronavirus pandemic, President Recep Tayyip Erdoğan said Tuesday.

“We will support employment for young people under 25 and enable them to get (work) experience,” Erdoğan said in a televised statement following a Cabinet meeting, adding that “normalization support” would be provided to employers.

Erdoğan’s remarks come after Treasury and Finance Minister Berat Albayrak on Friday said the government was working on a comprehensive employment shield package to support jobs affected by the pandemic.

The president said the government has prepared an employment shield package that will specifically ensure the employment of young people under the age of 25.

Turkey started its first phase of easing restrictions as of June 1 as the country advanced in its fight against COVID-19, the respiratory disease caused by the virus. Erdoğan on Tuesday announced further easing on restrictions, saying that cinemas, theaters and performance centers would be reopened as of July 1, while the closing hours of venues like restaurants and cafes had been extended from 10 p.m. to midnight.

Health Ministry data showed 993 new COVID-19 cases were diagnosed on Tuesday, bringing the total number to more than 172,000, with more than 4,700 deaths.

Erdoğan said that the government would provide support for the real economy and industries to revive export- and production-oriented growth.

He said the government will support employers who put employees on the short work allowance program or had to make layoffs due to the decrease in economic activities.

The government imposed a three-month ban on layoffs in April to offset shuttered businesses and unemployment in the face of the outbreak, while media recently reported Ankara could extend the ban for another three months.

Under the allowance to bail out firms amid the coronavirus lockdown, the government pays 60% of staff salaries for three months within the ranges of TL 1,752 ($257.74) to TL 4,381.

The fiscal support under the relief package the government announced in March to cushion the economic fallout from the outbreak has exceeded TL 280 billion, Albayrak said Friday.

With the multiplier effect, the size of the bailout package has hit over TL 600 billion, he added.

"Despite our losses in April, the leading indicators of May show that our economy is in a rapid recovery," Erdoğan further stressed, noting, "We are determined to support this positive process by keeping inflation down to the levels we target."

The country's inflation climbed more than expected to 11.39% year-on-year in May, according to Turkish Statistical Institute (TurkStat) data. May's annual inflation was up from 10.94% in April. Month-on-month, consumer prices rose 1.36% in May.

Erdoğan said thanks to the period in which inflation has declined and uncertainties in the markets have been replaced by confidence while significant achievements have been made in macroeconomic indicators, the country has implemented a comprehensive package of measures against the coronavirus impact on the economy.

"We supported our companies, tradesmen and citizens without the need for outside assistance and the support of any international institution," Erdoğan said.

The government has also responded to every request instantly and put into use, Erdoğan said, giving the examples of recently announced credit packages by the state lenders.

Half loans provided to SMEs

According to the Banking Regulation and Supervision Agency (BBDK), nearly half of the loan support packages introduced by primarily public banks were used by small and medium-sized enterprises (SMEs).

The loan volume from March to April surged by TL 207.7 billion, of which nearly TL 95.7 billion was an increase in SMEs loans.

TL 207.7 billion, namely a TL 95.7 increase in loans from March to April, was used by small and medium-sized enterprises (SMEs). Thus, 46% of the surge in loan volume in the month were new loans provided to SMEs or restructured loans.

The total SMEs loans amounted to around TL 662.54 billion, while it increased to nearly TL 758.23 billion in April, according to BDDK data. The total SME loans have increased by 14.4%.

Erdoğan went on to say that Turkey has stepped in to strengthen national and domestic production in recent years, the TL 20 billion worth investment incentive credit announced recently being one of them.

Turkey has entered the normalization process in an economically strong position, Erdoğan said the country will strengthen its place in the post-pandemic world economy with advantages in production, trade and logistics.

The economy posted one of the fastest expansion rates among its peers in the first quarter of 2020, propelled by a surge in consumption that occurred just before a lockdown, to stem the spread of the pandemic, was put in place.

The country's gross domestic product (GDP) grew 4.5% year-on-year in the January-March period, according to the Turkish Statistical Institute (TurkStat), after the economy showed a growth rate of 6% in the last quarter and nearly 1% in 2019 as a whole.