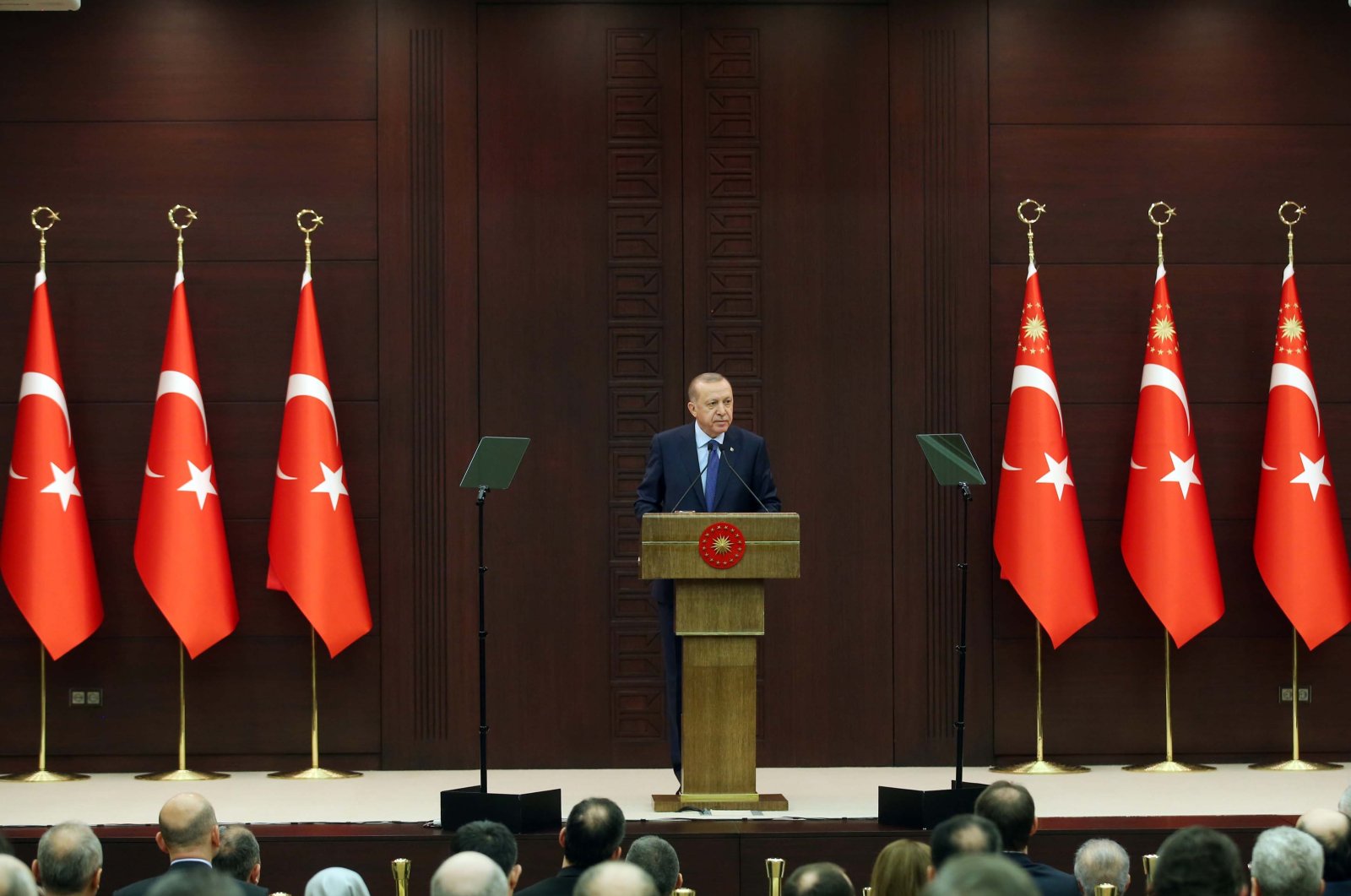 Turkey on Wednesday unveiled a stimulus package that involves a number of measures aimed at mitigating the potential economic fallout of the coronavirus and providing businesses with the liquidity required to continue operations.

“With a package we call the Economic Stability Shield, we are deploying TL 100 billion ($15.4 billion) to reduce the effects of the coronavirus outbreak,” President Recep Tayyip Erdoğan told a news conference in the capital Ankara after he chaired a meeting with ministers, bankers and business leaders to discuss ways to deal with the pandemic, which he said could take a toll on the economy.

Erdoğan said the country would postpone debt payments and reduce tax burdens in various sectors under the package to support the economy and lessen the impact of the pandemic.

“It is not easy to keep all the wheels of the economy turning while battling the coronavirus,” Erdoğan said prior to the meeting. "If we can manage things well over the next few weeks, keep the nation well informed and keep the virus under control, we anticipate a good outlook, better than we would have hoped,” he said. “We can see that greater opportunities await us when we successfully get through this period.”

Turkey confirmed its first death from the coronavirus on Tuesday and a doubling of its confirmed cases in one day to 98 after ramping up measures to combat the spread of the virus.

Under the package, Erdoğan said the country would postpone for six months the April, May and June concise tax withholding, value added tax (VAT) and insurance premium payments for the retail, shopping mall, iron and steel, automotive, logistics and transportation, cinema, theater, accommodation, food and beverage, textile and garment, and event and organization sectors.

"We will not apply the accommodation tax until November. We postponed the April, May and June easement fees and revenue share payments related to hotel rentals for six months. For domestic air transportation, we are reducing the VAT rate from 18% to 1% for three months,” the president said.

He noted that the loan principal and interest payments of the companies whose cash flows have deteriorated will be delayed for a minimum of three months, while additional financial support will be provided if necessary.

“We will provide inventory financing support to exporters in order to maintain capacity utilization rates during the temporary slowdown in exports,” Erdoğan said.

He also remarked that the country will postpone for three months the April, May and June principal and interest payments to Halkbank by tradesmen and artisans who declare that their businesses have been negatively affected during this period.

Also, the government looks to increase the creditable amount from 80% to 90% for houses valued less than TL 500,000 and reduce the minimum down payment to 10%.

“We will increase the Credit Guarantee Fund limit from TL 25 billion to TL 50 billion and provide it to (small- and medium-sized enterprises) SMEs and companies with liquidity needs and collateral deficit. We will encourage the introduction of loan packages for social purposes under favorable and advantageous conditions for our citizens,” Erdoğan stressed.

The government will also ensure that the firms that have fallen into default in April, May and June have a “force majeure” note in their credit registry. According to the president, the government will also continue minimum wage support and will ensure flexible and remote working legislation becomes more effective.

The minimum retirement salary will be increased to TL 1,500, Erdoğan added.

"We will implement the Short Work Allowance, and the processes required to benefit from it will be facilitated and expedited. Thus, while we provide temporary income support to the workers in the workplaces that suspend their activities, we will also reduce the cost to the employers,” he noted.

As part of efforts to keep the economy on track, the Central Bank of the Republic of Turkey (CBRT) cut its key interest rate by 100 basis points on Tuesday at an earlier-than-scheduled policy meeting and took steps to support volatile financial markets.

The bank cut its benchmark one-week repo rate to 9.75% from 10.75%. The Monetary Policy Committee (MPC) brought forward a meeting originally scheduled for March 19 to discuss the “potential economic and financial impact” of the coronavirus, the central bank said.

The seventh straight rate cut follows a crash in oil prices that can help mitigate its inflation and current account woes and comes as central banks around the world roll out stimulus measures to counter the pandemic.

Goldman Sachs Group Inc. economists now predict the central bank will cut the rate by another 75 basis points in April “rather than in smaller increments.”

The bank said that despite the Turkish lira’s slide, the fall in commodity prices along with the global economic slowdown due to the virus will help lower Turkish inflation more than expected, clearing the way for monetary easing.

Inflation was a pressing issue for the economy in the second half of 2019 when it surged to a 15-year high above 25%. But it has since dropped gradually throughout last year and briefly touched single digits. It closed the year at 11.84% in December. In response to the hike, the CBRT had raised its policy rate to 24%, where it stayed until last July.

Inflation rose less than expected to 12.37% year-on-year in February. Month-on-month, consumer prices rose 0.35%, according to the Turkish Statistical Institute (TurkStat).

"In order to contain the negative effects of the coronavirus pandemic on the Turkish economy, it is of crucial importance to ensure the healthy functioning of financial markets, the credit channel and firms' cash flows," the bank said.

The bank announced several measures to effectively flood the financial sector with cheap lira liquidity, including an interest rate 150 basis points lower than the benchmark one-week repo rate through repo auctions with maturities up to 91 days. It said it would also provide lenders with as much liquidity as needed through intraday and standing overnight facilities.

The measures aim to boost predictability by providing banks with flexibility in the Turkish lira and foreign exchange liquidity management, offering targeted additional liquidity facilities to banks to secure uninterrupted credit flow to the corporate sector.

Economists dubbed the measures after the rate decision as stronger than the cut itself, saying that the steps show the central bank will provide a robust funding facility to the banking system in order to ensure credit continues to flow to the real sector.

Among other measures announced on Tuesday, the bank said forex reserve requirement ratios will be broadly cut by 500 basis points for lenders that meet real credit growth conditions. These lenders will be provided with some $5.1 billion of forex and gold liquidity, the central bank noted.

The central bank said conventional swap auctions with maturities of one, three and six months, which are currently available against U.S. dollars, may also be held against euros and gold.

The bank also moved to backstop companies’ international trade in the face of global economic uncertainty, saying up to $7.6 billion of rediscount credit repayments could be postponed by up to 90 days.

Central banks such as the U.S. Federal Reserve and the Bank of England (BoE) have also taken urgent measures to contain the fallout from the coronavirus. Economists said the Fed’s move opens the door for Turkey’s central bank to ease policy by even more.

Treasury and Finance Ministry also said the country also extended the deadline to pay income tax to the end of April from March.

The country's banking watchdog, Banking Regulation and Supervision Agency (BDDK), sought on Tuesday to limit an expected burst of nonperforming loans (NPLs) due to a coronavirus-related slowdown, by doubling to 180 days the time allowed for loans to remain unpaid before they are classified as NPLs.

The change will be applied through to the end of the year and cover consumer, housing, vehicle and commercial loans, the BDDK watchdog said, citing “disruptions to economic and commercial operations due to the virus outbreak” in Turkey and elsewhere.

Last Wednesday, the country became the last major economy to report an outbreak after taking what the World Health Organization (WHO) described as “vigilant” measures to delay it.

On Monday the country imposed flight bans on six more countries including the U.K. and the United Arab Emirates, bringing the total number of countries to 20. The country also temporarily closed cafes, sports and entertainment venues and is suspending mass prayers in mosques to contain the spread of the coronavirus.