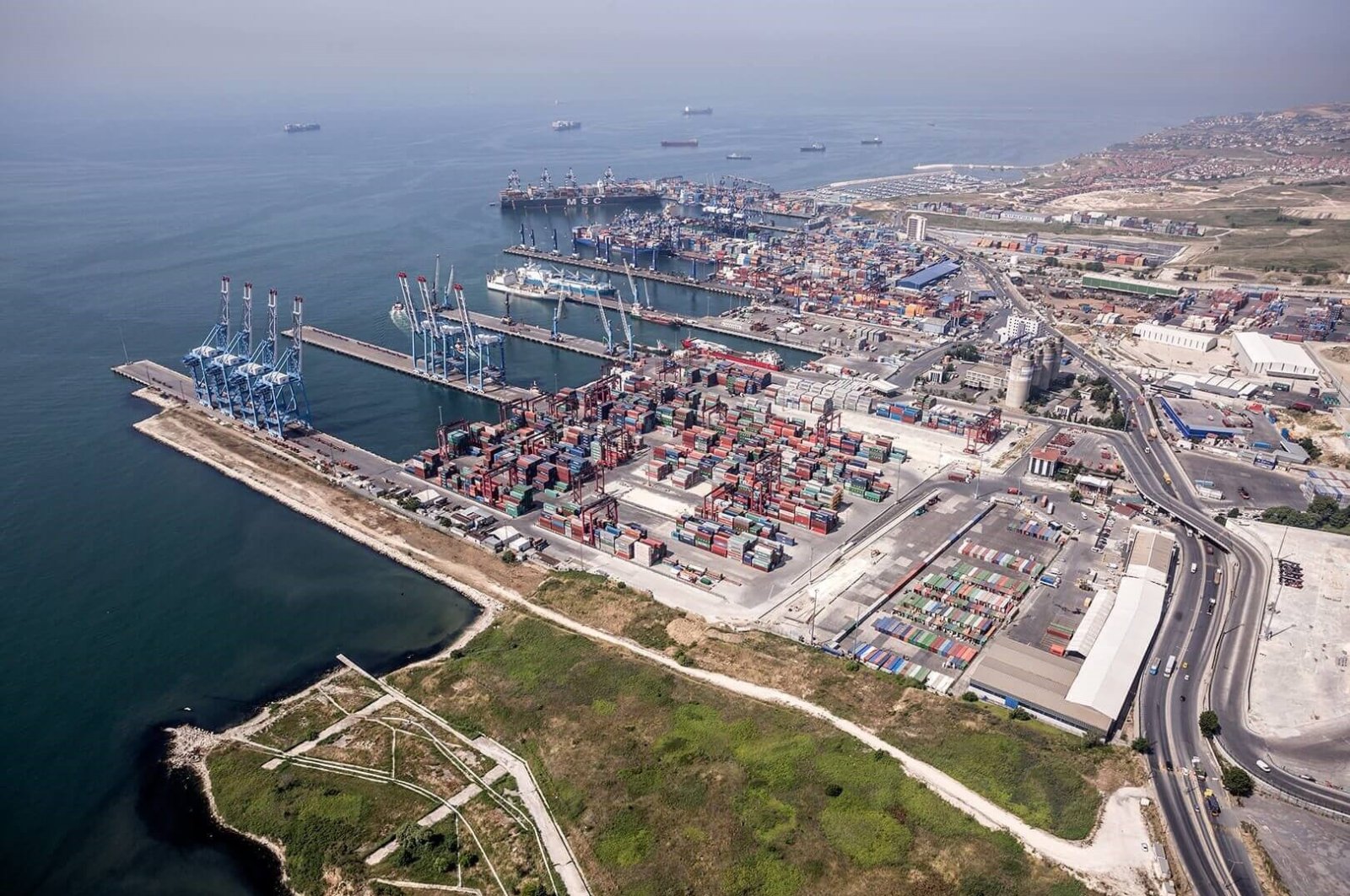 Containers and ships are seen at Kumport, one of Turkey's largest ports, Istanbul. (Photo courtesy of Kumport)
by DAILY SABAH WITH AA Jul 08, 2020 3:21 pm
RECOMMENDED

Turkey has started to see positive signals of the return to normal levels in foreign sales and in the economic picture in general. Meanwhile, the Manufacturing Industry Export Climate Index, the leading indicator measuring the activity conditions of the Turkish manufacturing sector in main export markets, also increased to 47.5 in June. Experts said they expect a full recovery in exports in the second half of the year.

Turkey provided a model in cooperation between the private sector and the state during the coronavirus pandemic, Trade Minister Ruhsar Pekcan said Tuesday, speaking on the positive outlook for exports and encouraging businesses, especially export firms, to take advantage of state support.

Pekcan was speaking at an award ceremony held online by the Istanbul Chemicals and Chemical Products Exporters' Association (IKMIB), the first virtual ceremony of the exporters’ unions.

The minister said Turkey approached the coronavirus pandemic in a proactive manner from the very beginning of the crisis in the country and has been working to minimize the pandemic’s effects on the economy and trade.

Pointing out that there is an increase in June exports on both an annual and monthly basis, Pekcan said the exports of the chemical sector saw a slight decline in March, April and May, as did exports in other sectors, but it increased as of June.

Turkey's exports in June surged by 15.8% year-on-year, registering a 35% month-on-month increase and bouncing back from a decline due to the coronavirus pandemic.

Pekcan said the Trade Ministry is ready and willing to work with the business world and is expecting the “growth trend to increase much faster in all our sectors as well as in the chemical industry.”

The minister said that “contactless trade” was also implemented during the pandemic, with an aim to keep foreign trade going during the crisis, and the business world was supported by the state with the Economic Stability Shield support package rolled out at the beginning of the crisis.

The government in March announced the package to support citizens and businesses, postponing debt payments and reducing tax burdens in some sectors. Since then, Ankara has gradually expanded the measures. The fiscal support under the package has exceeded TL 280 billion (over $40 billion), Treasury and Finance Minister Berat Albayrak recently said.

There is a positive outlook not only in the field of foreign trade but also in other economic indicators, Pekcan said. She noted that just like the country’s health sector stood apart from other countries' health sectors thanks to its developed infrastructure and the efforts of health workers, the economy will also show positive divergence.

The minister underlined her trust in the country’s potential, dynamism, educated human capital and industrial capacity in this regard.

"With the business world, we will take the necessary steps together to strengthen our position in the world economy," she said.

Pekcan said they expect and support all industries to strengthen their position in global supply chains.

Regarding the support provided by the ministry to the chemical industry, Pekcan said that in 2019, 171 fairs were included within the scope of support for the chemical industry. About 20 projects supporting the development of international competitiveness have been completed and 13 projects are in the works.

“In the last two years, sectoral trade delegations have been organized for 13 countries with the support of our ministry; 4,500 bilateral business meetings have been held with the acquisition committees,” she said.

Export index up in June

Meanwhile, the Istanbul Chamber of Industry (ISO) Manufacturing Industry Export Climate Index, the leading indicator measuring the activity conditions of the Turkish manufacturing sector on main export markets, increased to 47.5 in June from 34.1 in May.

The latest data showed a rapid improvement in the export conditions of the manufacturing sector, pointing to an end in the contraction in the demand for export markets.

The recovery started in many global markets with the easing or full lifting of COVID-19 restrictions and allowed the export climate index to approach the threshold.

In some countries that were the former epicenters of the pandemic, production has moved rapidly to the growth zone, with China taking the lead.

Overall, Purchasing Managers' Index (PMI) surveys pointed to activity increases in the markets that make up about 9% of Turkish manufacturing sector exports. In other markets, the contraction slowed.

In Germany, the U.K., Italy and Spain, which accounted for nearly 26% of Turkish exports, the contraction in production significantly lessened as a result of the lifting of curfews.

While recovery was observed in many economies, some others are still being negatively affected by the pandemic and continue to experience sharp contractions in activity.

In June, the highest decreases in production occurred in Indonesia, Mexico and Mozambique. However, these economies make up a small portion of the total demand for Turkish manufacturing exports.

IHS Markit Economic Director Andrew Harker, who commented on the index, said it was felt that the worst of the COVID-19 contraction was over.

Stating that firms can now begin to evaluate the transition to the regrowth process, Harker said, "It was a positive development for Turkish manufacturing sector exporters that the export markets either moved to the expansion zone or became much closer to balancing.”

“In the second half of the year, if the pandemic does not spread rapidly again, it may be possible that the export demand will recover significantly,” he added.