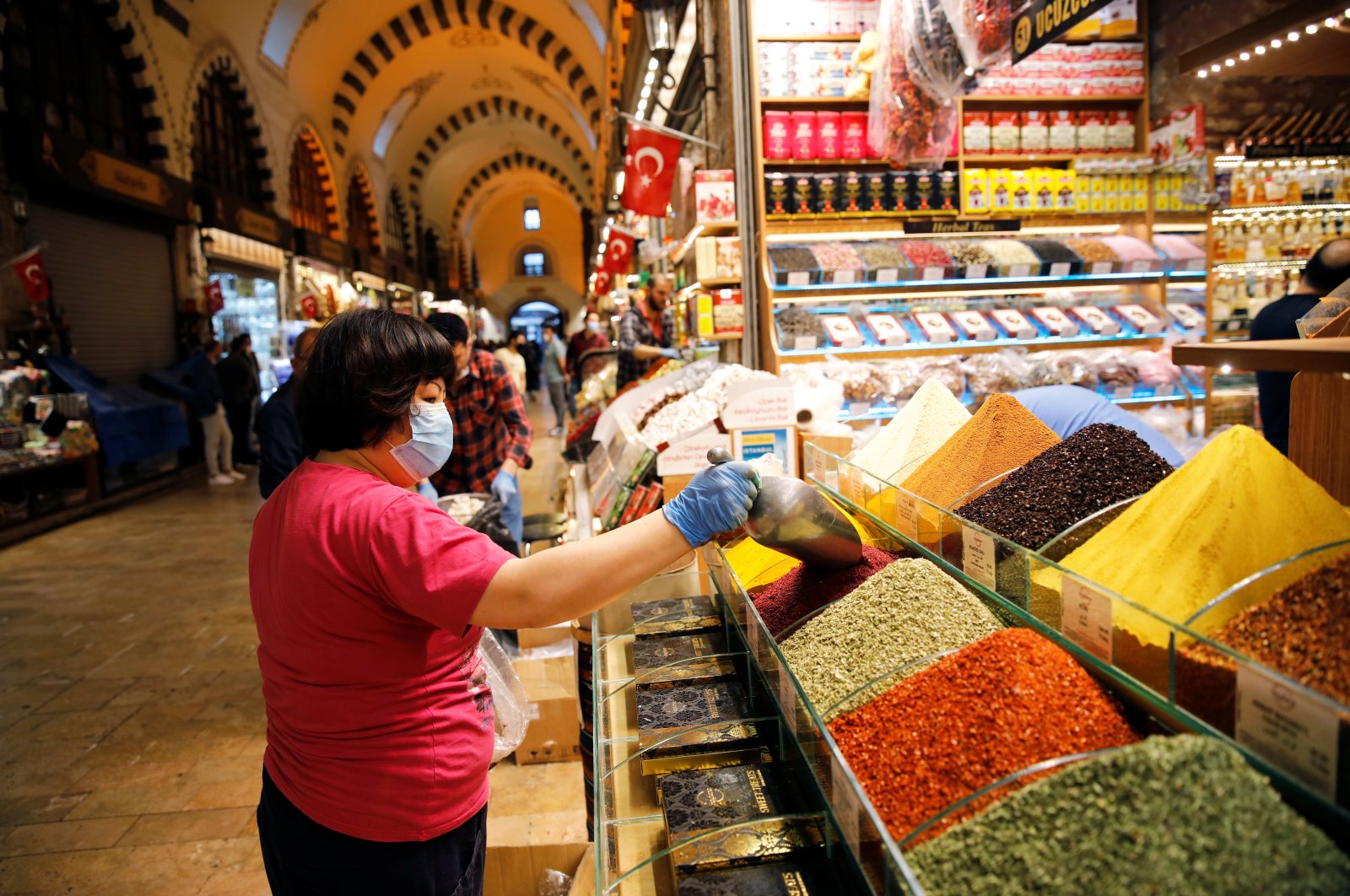 A vendor adds spice at a stall at the spice market, also known as the Egyptian Bazaar, as it reopened after weeks of closed doors amid the spread of COVID-19, Istanbul, Turkey, June 1, 2020. (Reuters Photo)
by DAILY SABAH WITH AGENCIES Sep 22, 2020 11:40 am
RECOMMENDED

Commenting on the data, Treasury and Finance Minister Berat Albayrak said that the indicators have entered a course of recovery and that Turkey’s economy is showing a strong upward trend for the third quarter.

“Our economy gave a strong upward message for the third quarter. According to August, the consumer confidence index increased by 3.2% to 82,” Albayrak’s Twitter statement read. The minister added that he hopes “we will complete the year at a better point than predictions.”

The index value is jointly calculated by TurkStat and the Central Bank of Turkey (CBRT) through the measurement of consumer tendencies. All subindices improved in September compared with last month, the TurkStat data showed.

"Two of the four subindices that compose the consumer confidence index have been updated in accordance (with) the recommendations of the European Commission General for Economic and Financial Affairs and to ensure the international comparability of the index," TurkStat said.

"The consumer confidence index calculated according to the previously updated situation increased by 3.7% in September compared with the previous month; the index which was 59.6 in August became 61.8 in September," it added.

Consumers' assessments and expectations in nearly 20 economic and financial categories are measured in monthly tendency surveys. The consumer confidence index, calculated from the survey results, is evaluated within a range of 0-200, indicating an optimistic outlook when the index is above 100 and a pessimistic one when it is below the number.

Measures to combat the pandemic brought the economy to a near standstill in April, when consumer confidence plunged. During the beginning of the year, the index reached the peak level in 21 months in February after it surged 14 points to 97.5 compared with the same month last year. The index then showed slow-ups and slowdowns.

The steps taken to normalize the economy and efforts to stabilize the uncertainties brought by the coronavirus pandemic amid a turbulent period on a global scale was reflected in the recent data.

Measures taken by the economic administration and the policies implemented as well as a downward pressure in inflation would further lead the economic confidence index to keep its upward trend.

When the economy was battered by currency volatility, high inflation and high-interest rates during a financially and economically turbulent period that kicked off in the second half of 2018 and stretched into the first half of 2019, the CBRT responded by raising its policy rate. It then started to cut rates to boost growth.

Meanwhile, the CBRT said in a statement earlier this month that economic activity, which has been on a rapid decline due to the COVID-19 measures in the second quarter, gained strength since May and partial recovery was seen in various sectors including tourism.

Stating that the Central Bank will not change interest rates for a long time, analysts said that there may be an increase in the weighted average funding cost. Societe Generale Emerging Markets Strategy Director Phoenix Kalen in an Anadolu Agency (AA) survey predicted that the CBRT would leave the policy rate unchanged at 8.25% for a long time.

Medel Global Advisors Director Nigel Rendell also made the same prediction, saying that the CBRT would not change the interest rates. He estimated that the policy rate would remain unchanged at 8.25%. A senior economist with Capital Economics Developing Markets, Jason Tuvey, also agreed on the general view, saying that this meeting is unlikely to bring a change.

Reminding that the bank has taken steps toward monetary tightening, Tuvey said that the weighted average funding cost increased with these steps.

According to an AA survey of 27 economists, 23 economists projected no change in the one-week repo auction rate while four economists predicted that the interest rates would be raised.