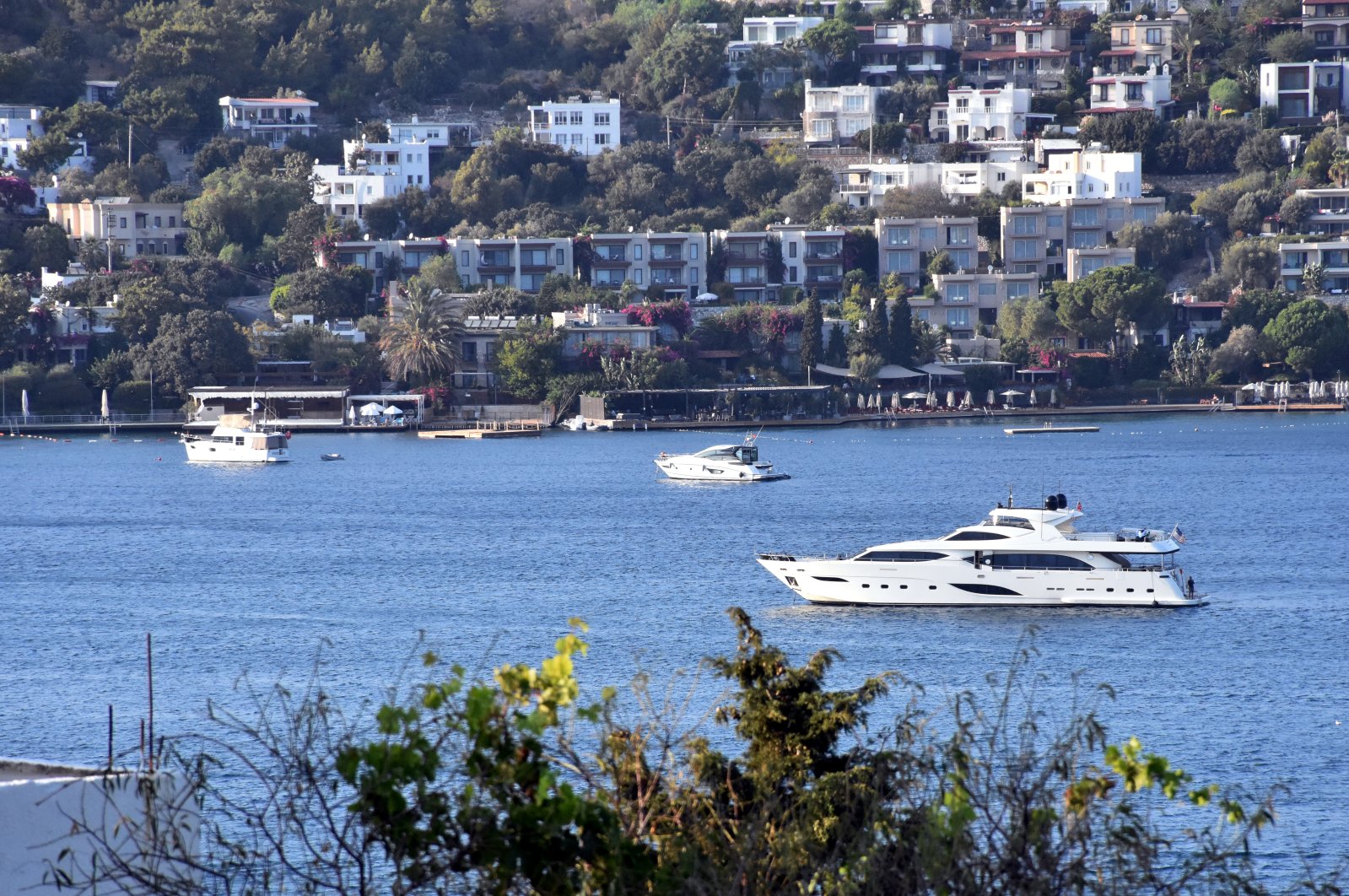 Yachts are seen near the shores of Bodrum amid increasing sea tourism mobility despite the pandemic, southwestern Muğla, Turkey, Sept. 28, 2020. (AA Photo)
by DAILY SABAH WITH AA Sep 28, 2020 2:49 pm

The value of ongoing projects including infrastructure in Bodrum has so far topped $5 billion, the mayor of the southwestern resort town said, as the district continues to attract international investment amid the outbreak

Famed for its sparkling seas, warm climate, bustling marinas, blue voyage cruises, upmarket tourism and many other unique features, the touristic hot spot of Bodrum on the Turkish Riviera has continued to attract international investments despite the pandemic.

"Domestic and foreign investments have been climbing in recent years, and they didn’t slow down during the pandemic," Ahmet Aras, mayor of the southwestern resort town, told Anadolu Agency (AA) Monday.

The value of ongoing projects including infrastructure projects in Bodrum has so far topped $5 billion (TL 39.13 billion), Aras said, adding that prominent global firms bought idle hotels in the town and revamped them.

"Elite global hotel brands continue to flock to Bodrum," Aras noted, adding that most of them come from the United States, Germany, the Netherlands and the United Kingdom.

“A globally famous fine dining restaurant – found in only five locations worldwide – opened a branch in Bodrum, and is also the only one in Turkey," he said.

"Russians are mostly interested in sports tourism, especially ice hockey, which is at the project stage now," he said.

Agriculture is also an important source of income in Bodrum, with wheat, grapes and olives among the town’s top offerings.

"We will start cultivating medicinal and aromatic plants in the northeastern part of the peninsula (called Karaova),” Aras said on the region’s growing agricultural development.

Pointing to how the pandemic spurred greater demand for housing, Aras highlighted that ground was broken on new real estate projects to keep up with this rising demand.

Aras said that over time tourists who fell in love with holidays in Bodrum started eyeing investment opportunities in the town.

"This peninsula is always open to projects that are in harmony with its environment, identity and character," he underlined.

The global tourism sector took a hit from the pandemic when most planes were grounded, so Bodrum saw a 90% fall in the number of foreign visitors through August to 100,000, Aras said.

But before the outbreak began, he said, Bodrum attracted widespread attention from the Western European, Baltic, Russian and Ukrainian markets, and it recently saw renewed interest when some thought summer was over.

"Despite the gloomy figures, the summer season, which was supposed to end by Sept. 15, was extended into mid-October," Aras underlined.

Currently, the occupancy rate at some Bodrum hotels is over 90% on the back of booming domestic tourist demand, he explained.

"We expect this trend to continue for some time, as for the months of September and October, which we call ‘yellow summer,’ are (some of) the best times in Bodrum," Aras said.

He highlighted that domestic tourists who have summer houses in Bodrum flocked to the town after virus-related travel curbs were lifted.

"This helped us offset the loss in foreign visitors," Aras noted.

Nearly 10,000 cars entered the town in July, translating to an impressive nearly 30,000 people a day, he said.

The fine weather in Bodrum, its atmosphere, open-air spaces, and spacious houses and villas proved irresistible to many people, especially those who switched to remote working and made a move from large cities.

The population of Bodrum, which normally hovers around 180,000, jumped to 400,000 after the arrival of summer house vacationers, he said.

"Bodrum is the pearl of Turkey and continues to be a very charming tourism hot spot for both domestic and international tourists," Aras stressed.

"People almost compete to come to Bodrum on vacation, to buy a house, to live and invest in the town."

"The existence of world-famous marinas such as Yalıkavak and Bodrum and yacht and wooden boat manufacturing distinguished Bodrum from similar destinations," he said.

Touching on the municipality's goals for the next five years, Aras reiterated their determination to tackle the town’s infrastructure challenges.

"We will continue our work with the Bodrum Promotion Foundation (BOTAV) to make Bodrum the most popular tourist destination in the world," he added.

"We will have a digital platform called ‘Visit Bodrum’ touting our tourism, which prioritizes health and safety and quickly adapts to the changing tourism expectations from the pandemic," he said.

Bodrum, in other words, seems set to continue trending as one of the world’s most unique and attractive tourist hot spots, no matter what the years ahead may bring.

Meanwhile, the population of the Kuşadası district of western Aydın province, a touristic hot spot on the Aegean shores, has jumped during the pandemic, as many local tourists coming to the region have decided to settle, which also send real estate sales and prices high.

Domestic tourists from provinces like Istanbul, the capital Ankara, western Izmir and northwestern Bursa caused the district population to reach 424,000 from an earlier figure of 117,000, outpacing 35 provinces.

One of the new settlers, Zülfü Uçan, a retired bank employee who went to Kuşadası with his wife when the normalization process began in the country in June said in a report published on broadcaster NTV that they have been coming to the region for five years for holidays but this year, they did not want to return to Istanbul.

Kuşadası provides a safer environment for us during the pandemic, he added.

The increasing demand for the district caused a rise in real estate prices, as well. While the daily rent of a duplex villa with a pool was around TL 1,200 during last year’s summer season, it has increased to up to TL 2,500.

The price hikes were also observed for the apartment flats that range between TL 1,500 to TL 3,500 depending on several varieties such as size and the neighborhoods they are located in.

Gamze Ermiş, a real estate consultant in Kuşadası, said the fact that many of the vacationers that came to the district did not leave has caused the prices of properties to significantly rise.

The local tradesmen, meanwhile, plan to compensate their losses caused by the reduced numbers of tourists during the pandemic thanks to the contribution of newcomers.