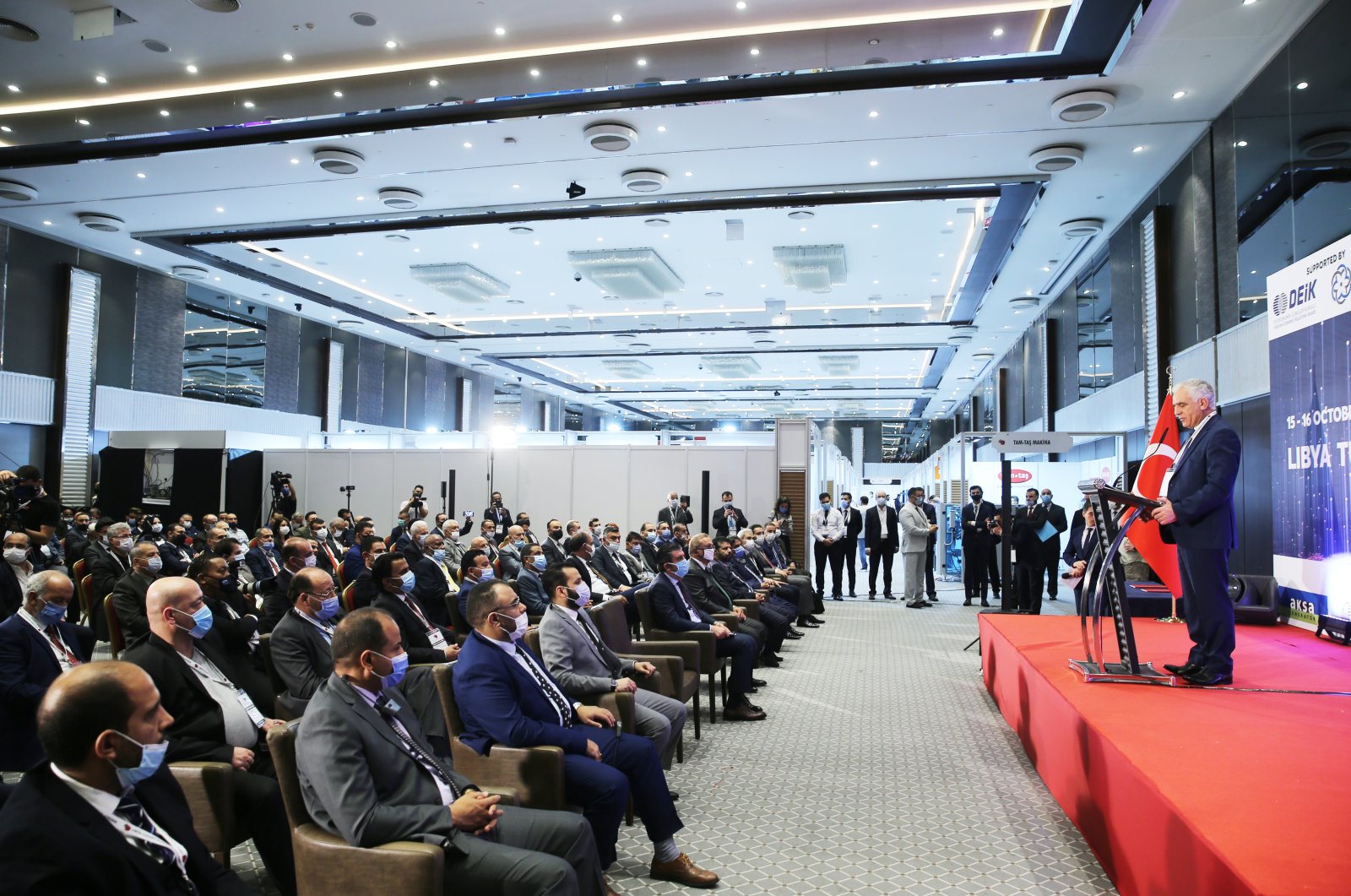 Mohammad Abdul Karim Raied, who is the president of the Economy, Trade and Investment Committee of the parliament of the United Nations-recognized Government of National Accord (GNA) gives a speech during the Libya-Turkey Business Platform in Istanbul, Oct. 15, 2020. (AA Photo)
by DAILY SABAH Oct 15, 2020 3:31 pm
RECOMMENDED

Turkish and Libyan businesspeople, gathered at the Libya-Turkey Business Platform in Istanbul, shared strong messages of economic and trade cooperation.

As part of the business event organized by Turkey's Foreign Economic Relations Board (DEIK) on Oct. 15-16, Turkish and Libyan businesspeople are getting together.

Turkey and Libya's officials, private sectors and nongovernmental organizations (NGOs) joined the event, which is expected to contribute to bilateral business relations.

During the opening ceremony of the event, speakers from the two countries stressed that Turkey and Libya have the potential to realize more trade activities.

In the event, an agreement to increase bilateral trade relations was signed between DEIK and Libya's General Federation of Chambers of Commerce and Industry.

Mohammad Abdul Karim Raied, the head of Libya's General Federation of Chambers of Commerce and Industry, said Turkey and Libya are going through important times in their region.

The two countries have a large trade volume, and it will expand day by day, he said.

This cooperation is so important, also for Libya's future and sustainability, and it can only become stronger through investors, he underlined.

Murtaza Karanfil, the head of DEIK's Turkey-Libya Business Council, said that at the event, 100 Turkish producers and exporters will come together with 200 Libyan businesspeople.

Libya is an important country and partner for Turkey in its region, and Turkish contractors have conducted projects in Libya worth $29 billion since 1972, he noted.

Turkey and Libya's bilateral trade volume was around $2.5 billion last year, he reminded, saying that the Turkish business world aims to increase this figure to upper levels.

Turkey backs Libya in energy, construction and manufacturing sectors and is able to complete all projects successfully in Libya, he underlined.

Başaran Bayrak, the deputy chairman of the Turkish Exporters' Assembly (TIM), said Turkey is the second-largest source in Libya's imports.

The two countries can reach a $10 billion bilateral trade volume, which is currently around $3 billion, he added.

Bayrak also said the Turkish contractors have completed several projects in Libya, including the largest energy plants in the country.

Despite a slowdown in global trade activities due to the pandemic, Turkey's exports to Libya increased in the first nine months of this year.

Exports in the sectors of defense, raw vegetables and fruits and cement increased during this period, while the chemical, furniture and cereals sectors made the most of exports to the country, he underlined.

A memorandum of understanding (MoU) recently signed by Turkey and Libya to boost trade and economic ties has been approved, Turkey’s Official Gazette announced Sept. 15, a constructive step toward the Tripoli government’s aim of rebuilding its civil-war-torn country.

According to the deal, both governments emphasized the importance of continuing the execution of development projects in Libya, taking into account the country's stability and laying foundations for a genuine bilateral partnership.

Turkey and Libya signed the MoU, which was set to lay the groundwork to resolve ongoing issues between Turkish firms and Libyan employers, on Aug. 13.

With the MoU, many projects lie ahead for Turkish businesses in the Maghreb country, including those already initiated such as rebuilding and resuming the activities of the construction sector, which have been halted due to the ongoing conflicts.

Turkey’s business relations with the North African nation are not limited to the construction sector, though it has had a large share of the pie. The cooperation in the oil and gas sector has also gained momentum, especially after the two countries in late 2019 signed a pact on maritime borders in the Eastern Mediterranean.

Foreign sales to Libya stood at $2 billion in 2019 with a 29% increase compared with the previous year but were still less than the 2013 figure of $2.7 billion before civil war broke out in the country.

Libya's government, formed in 2015, in the wake of the ouster of Moammar Gadhafi in 2011, has faced a number of challenges, including attacks by putschist Gen. Khalifa Haftar.

In recent months, however, the U.N.-recognized Government of National Accord (GNA) has turned the tide against Haftar's forces.

Ankara supports the GNA and a nonmilitary resolution to the crisis.