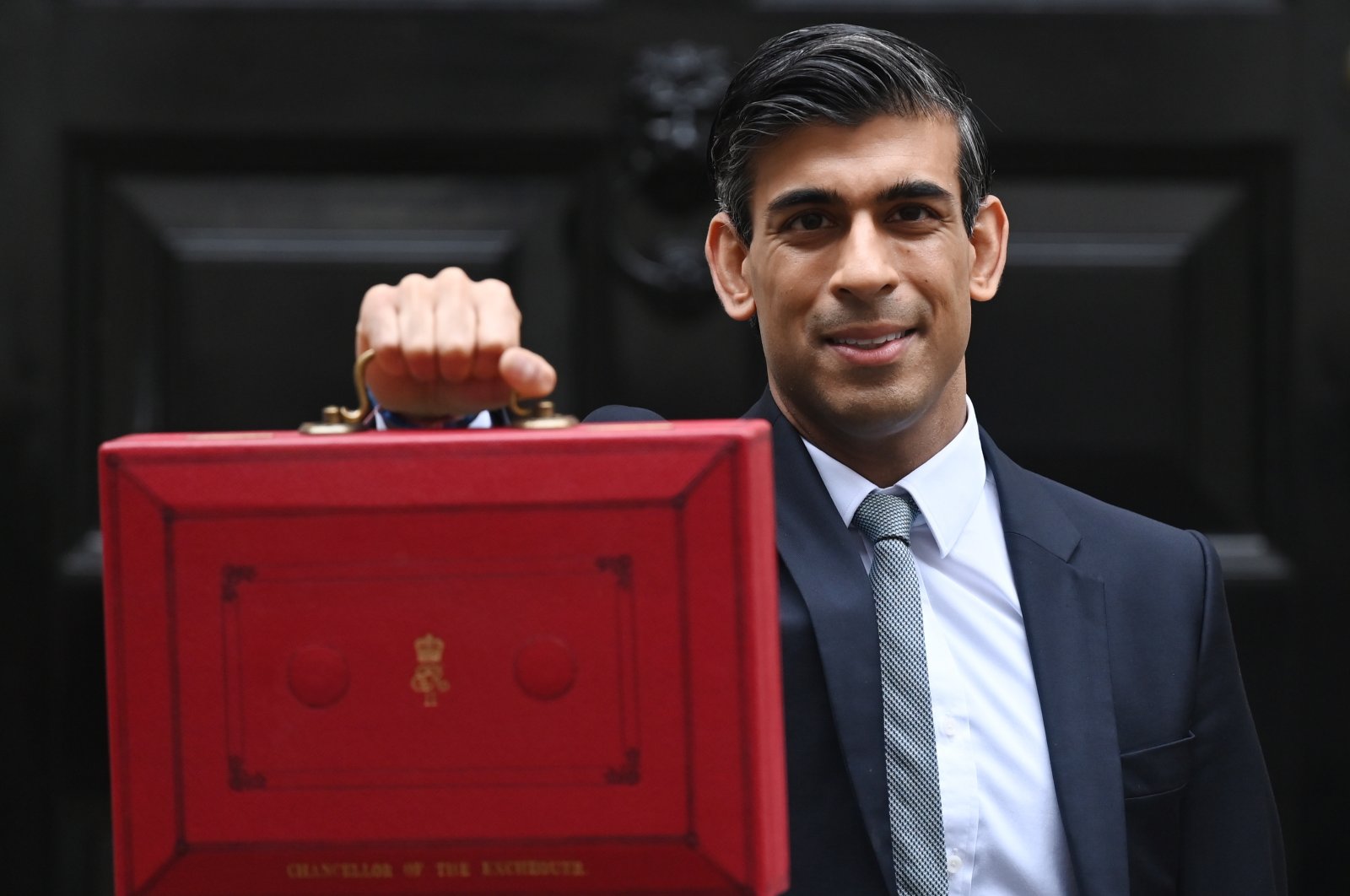 Britain's Chancellor of the Exchequer Rishi Sunak poses for photographers with the Budget box as he leaves 11 Downing Street in London, Britain, Oct. 27, 2021. (EPA Photo)
by REUTERS Oct 27, 2021 4:28 pm
RECOMMENDED

Britain’s stronger economic growth and lower borrowing would allow it to increase public spending as the nation emerges from the COVID-19 pandemic, Finance Minister Rishi Sunak said Wednesday as he wowed to protect households from rising inflation.

Sunak said in a half-yearly budget statement on Wednesday that the economy was likely to grow by 6.5% in 2021, a lot faster than a forecast of 4% made in March when Britain was still in a coronavirus lockdown.

Since then, the country has moved ahead with its COVID-19 vaccination program and lifted restrictions on the economy.

The 6.5% forecast by the Office for Budgetary Responsibility (OBR) was close to the International Monetary Fund's (IMF) estimate that British gross domestic product (GDP) will grow by 6.8% in 2021, the fastest among G-7 nations after the country suffered the biggest slump in the G-7 in 2020.

The higher growth forecast for 2021 meant the economy was expected to regain its pre-pandemic size at the turn of the year, not in the second quarter of 2022 as predicted in March although it was still later than in other countries.

It also meant Sunak – who racked up the biggest ever peacetime budget deficit to combat the coronavirus – would be able to borrow less than previously expected.

The OBR projected the budget deficit for the ongoing 2021/22 financial year would be equivalent to 7.9% of economic output – down from its previous forecast of 10.3% and almost half the size of last year's historic shortfall.

The OBR cut its forecasts for borrowing in each of the subsequent four financial years.

Sunak said every government department would get a real-term increase in spending and he promised the biggest increase in a decade in the core funding of local governments.

He announced new rules to govern borrowing: a commitment that underlying public sector net debt must be falling as share of GDP and the government's day-to-day spending must be balanced by revenues within three years.

'Willing to act' on inflation

Sunak acknowledged the risks posed by rising inflation, much of which he blamed on problems in the global economy.

"I understand people are concerned about global inflation – but they have a government here at home ready and willing to act," he said.

He announced further measures to ease a shortage of truck drivers which has led to supply chain problems.

"And in terms of our fiscal policy, we are going to meet our commitments on public services and capital investment but we are going to do so, keeping in mind the need to control inflation," Sunak said.

A big risk for Sunak is that the recent jump in inflation proves to be more stubborn than expected, which could push up the government's debt costs sharply.

Around a quarter of British gilts are indexed to inflation, a higher share than most other rich economies.

A 1-percentage-point rise in interest rates and inflation would cost taxpayers about 23 billion pounds ($31.6 billion) a year, according to government estimates.

That would be equivalent to double the money that Sunak plans to raise with his increase in social security contributions to fund the health service and social care.

Borrowing costs could start to go up as soon as next week when the Bank of England is due to announce its November policy decision against the backdrop of an inflation rate on course to hit 5%, more than double its target.