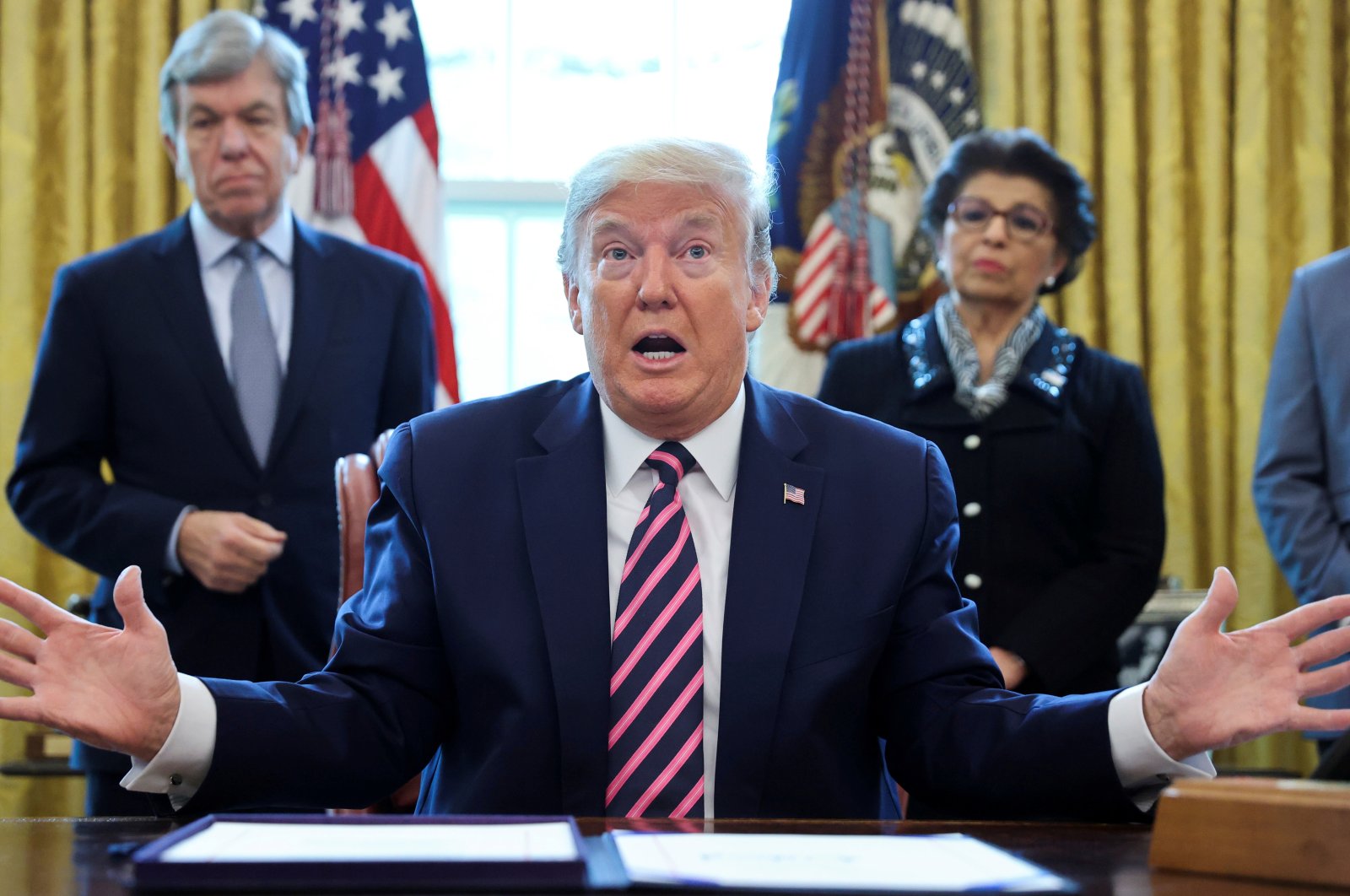 U.S. President Donald Trump speaks to reporters during a signing ceremony for the "Paycheck Protection Program and Health Care Enhancement Act," approving additional COVID-19 relief for the U.S. economy and hospitals treating people sickened by the pandemic, in the Oval Office at the White House in Washington, U.S., April 24, 2020. (Reuters Photo)
by REUTERS Jun 02, 2020 8:23 pm
RECOMMENDED

A technical snafu in a U.S. government system caused many small businesses to receive loans twice or more under a federal aid program to help businesses hurt by the COVID-19 pandemic, nearly a dozen people with knowledge of the matter said.

The money mistakenly handed out could amount to hundreds of millions of dollars that the government and lenders – which made the loans – have been trying to identify and recover in recent weeks, one of the people briefed on the matter said.

The technical issue and scale of the resulting duplicate deposits made under the Small Business Administration's $660 billion Paycheck Protection Program (PPP) have not been previously reported. They are the latest issue to emerge with the massive program, which was designed to keep businesses hurt by the novel coronavirus afloat and their workers employed.

The error was caused by a blind spot in the SBA's loan processing system which failed to see when some borrowers submitted applications multiple times typically with several different lenders, three of the sources said.

Information provided by the sources, which include industry executives and borrowers, as well as Reddit posts, suggest at least 1,020 duplicate deposits were issued. While that is a tiny fraction of funds disbursed under the huge program, it could amount to roughly $116 million dollars based on average loan sizes.

Launched in April, the PPP allows small businesses hurt by the pandemic to apply with a bank for a forgivable government-backed loan. The SBA has approved roughly 4.48 million loans averaging $114,000 in size for a total of $510 billion as of May 30.

Under the program, lenders issue the loan and are later reimbursed by the SBA. The government has said it will only guarantee one loan per borrower, which means lenders, rather than the taxpayer, are likely to be on the hook for the error.

"The SBA inadvertently issued duplicate loan approvals to some small businesses. It is our impression that the majority of these borrowers are...honest small business owners who had applied for a PPP loan through multiple lenders," a spokeswoman for BlueVine said in an email, adding "multiple" lenders were affected.

A spokeswoman for JPMorgan Chase said the bank was aware of a "handful" of duplicate deposits and had referred those customers to the SBA. A spokeswoman for Square confirmed it was working with the SBA and borrowers to resolve the issue.

Spokesmen for Wells Fargo and Bank of America declined to comment. A spokesman for Kabbage did respond to requests for comment.

"We have seen a small number of duplicate applications funded through the SBA Paycheck Protection Program, despite the administration’s guidance that applicants not apply more than once for a loan," said a spokesman for PayPal, which partnered with a bank to fund the loans. He added PayPal was working with the SBA and borrowers to resolve the issue.

The PPP was launched hurriedly on April 3 as the government rushed to get cash to millions of desperate borrowers. From the outset, the unprecedented first-come-first-served program struggled with technology and paperwork problems that led some businesses to miss out while some affluent firms got funds.

In the scramble for cash, many businesses applied with multiple lenders. Industry sources estimated that roughly 15-20% of the applications received by the biggest banks were duplicates.

Most of those were spotted and withdrawn, but a fraction appeared to slip through if a borrower's Social Security Number and tax identification code were mixed up in the system, one of the people said. Another source briefed on the issue said the SBA estimated that the universe of duplicate approvals amounted to hundreds of millions of dollars if not more.

"The SBA has asked lenders to review duplicate loans based on a list they provided and work with any other lenders that may have extended funds to get one of the parties to cancel," the BlueVine spokeswoman said.

"How is it that I was successful at getting money from two different banks?" asked one California-based business owner who said she received two deposits, one of which was processed by Wells Fargo. She told Reuters that she returned the other loan.

Businesses that refuse to return loans could be referred to the Department of Justice, which is probing suspected PPP fraud.

Some borrowers said they weren't clear on how to fix the issue. One Reddit user who last month said they received duplicate deposits from JPMorgan Chase and PayPal said they had a "deep fear" that if they reported the problem they may be left "with no PPP at all."