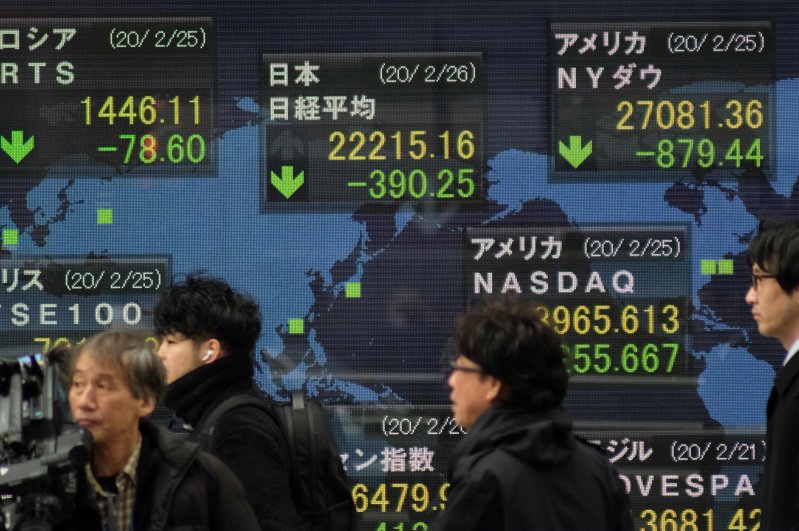 Spooked by the impact on China, the world’s second-biggest economy and the heart of corporate supply chains, and the increasing effect on other countries, stock markets sank deeper into the red and oil prices fell.

The number of new infections in China – the source of the epidemic – was for the first time overtaken by new cases elsewhere on Wednesday, most notably in Italy and Iran, raising fears that the outbreak has now become a pandemic.

The coronavirus has mainly battered China, causing over 82,000 cases and around 2,800 deaths.

“In the recent week, markets have come to realize that the outbreak is much worse and are now realistically pricing in the impact of the virus on the economy,” said Philip Marey, senior U.S. strategist at Rabobank.

“In that sense, it’s a bit of catching up from the relative optimism that was there in the beginning when markets thought (the virus) will be contained to China with some minor outbreak outside,” he added.

Wall Street’s main indexes fell for the sixth straight session and slipped into correction territory on Thursday, as the rapid spread of the coronavirus outside China intensified fears about the hit to economic growth and corporate earnings.

After hitting a record high last week, the S&P 500 has lost over $1.84 trillion in market capitalization this week alone.

Industry analysts and economists continued to sound the alarm as they assessed the impact of the coronavirus, with Goldman Sachs saying U.S. firms will generate no earnings growth in 2020.

Bank of America slashed its world growth forecast to the lowest level since the peak of the global financial crisis.

The pan-European STOXX 600 index fell 2.5% and the blue-chip index in Italy – the worst-hit country in Europe – sank as dozens of European companies issued warnings about potential damage to their profits.

“Safe-haven currencies are doing very well and gold is heading back higher, and unless we see a slowdown in the coronavirus cases outside China, risk sentiment will continue to be undermined,” said Peter Kinsella, global head of FX strategy at UBP in London.

Yields on U.S. Treasuries, which fall when prices rise, dropped below 1.3% for 10-year debt and the yield curve continued to send recession warnings.

Oil prices fell over 3% on Thursday, plunging for a fifth day to their lowest since January 2019 amid fueled fears that the pandemic could slow the global economy and dent demand for crude.

Consultants Facts Global Energy forecast oil demand would grow by 60,000 barrels per day in 2020, a level it called “practically zero”, due to the outbreak.

Markets are pricing a roughly even chance that the Federal Reserve will cut interest rates next month and have almost fully priced in a cut by April.

Yields on benchmark German 10-year debt fell to minus 0.5140%. Italian debt underperformed as the spread of the virus there raised fears of a recession.

Goldman Sachs said the equity market sell-off would create opportunities to add risk eventually and that it did not expect a deep bear market or U.S. recession.

“However, near term, we feel that positioning and valuations are not yet depressed enough and uncertainty on the global growth impact from the coronavirus is likely to remain high,” Goldman Sachs said in a note to clients.

Analysts have downgraded forecasts for Chinese and global growth, and policymakers from Asia, Europe and the U.S. have begun to prepare for a steeper economic downturn.

South Korean stocks shed another 1.05% on Thursday, closing at a four-month low, as it reported its largest daily rise in new virus cases since its first infection last month.

Unnerving investors further, the Bank of Korea kept interest rates unchanged on Thursday even though it downgraded its growth outlook.

With the infection rate in China slowing, the blue-chip CSI300 index finished up 0.3%. China’s central bank said on Thursday it would ensure ample liquidity to help limit the impact of the epidemic.

MSCI’s broadest index of Asia-Pacific shares outside Japan fell 0.5%, making it more than 4% lower for the week.

Taiwan raised its epidemic response level to the highest possible, and Japan’s Nikkei dropped 2% to a four-month low amid more worries the Tokyo Olympic Games would be canceled or shifted.

The safe-haven yen and the Swiss franc gained on Thursday with the Japanese currency heading toward 110 yen to the dollar, up nearly 2% so far this week. The dollar fell 0.32%. That was enough to help drag the China-sensitive Aussie dollar up from an 11-year low and lend support to the euro.