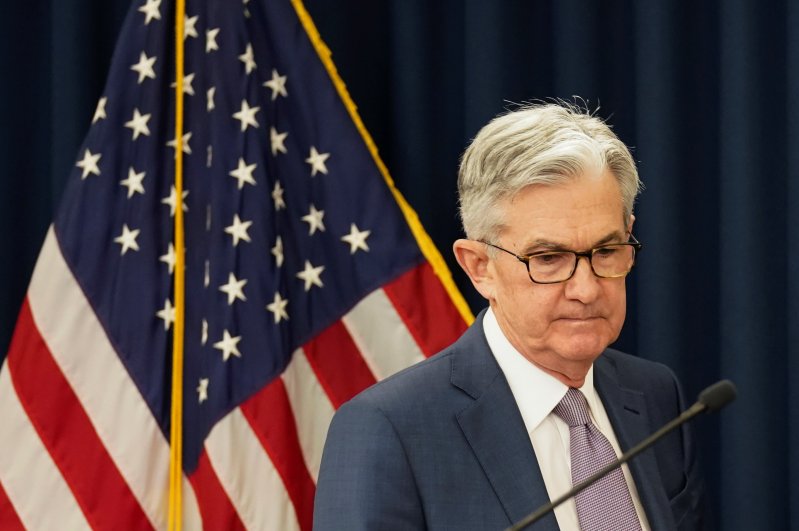 U.S. Federal Reserve Chairman Jerome Powell arrives to speak to reporters after the Federal Reserve cut interest rates in an emergency move designed to shield the world's largest economy from the impact of the coronavirus, Washington, March 3, 2020. (Reuters Photo)
by Daily Sabah with Wires Mar 04, 2020 5:09 pm
Edited By Alen Lepan

Central banks around the world are mulling measures they can take to help after the Fed’s emergency move seems to have failed to comfort financial markets, roiled by worries about a deeper and lasting slowdown amid the global spread of the coronavirus

Not many expected the immediate impact of the U.S. Federal Reserve’s emergency rate cut Tuesday to turn out the opposite of what was intended, as hopes that the 50 basis point cut would jumpstart battered stock markets amid the novel coronavirus were quickly dashed.

The large, highly unusual move made just 15 days before the next scheduled policy meeting sparked more anxiety about the impact of the outbreak and reflected growing concerns that the spreading illness will take a bite out of the U.S. and global economies as supply chains linked to China, the epicenter of the outbreak, are shut down.

The coronavirus’ rapid spread has alarmed central banks around the world. Some, including the Fed, have already moved to provide support, while others, including the European Central Bank (ECB), which has only said it would be prepared to act if necessary, are mulling measures they can take to help.

In almost exactly the same wording, the heads of the Fed, Bank of Japan (BoJ) and ECB said they were closely watching the growing uncertainty and increasing economic risks.

"We stand ready to take appropriate and targeted measures, as necessary and commensurate with the underlying risks," ECB President Christine Lagarde said. On Tuesday, the Bank of England (BoE) said it was ready to take all necessary steps to support the U.K. economy.

“The virus and the measures that are being taken to contain it will surely weigh on economic activity, both here and abroad, for some time,” Fed Chair Jerome Powell said in a news conference shortly after policymakers unanimously decided to slash rates to a target range of 1% to 1.25%.

The Fed’s first off-schedule move since the 2008 financial crisis came with comments highlighting both the scale of the challenge and the limits of monetary policy.

Investors had mixed reactions. They fled to safe assets, sending the 10-year Treasury to its lowest ever return, helping fuel a day of swings in stocks and other assets, with stocks losing most of the ground recovered Monday.

All three major U.S. stock market indexes closed nearly 3% lower, while the yield on the 10-year U.S. Treasury note, which falls when prices rise, dropped below 1% for the first time ever. The yield has fallen for 10 straight days, its longest slide in at least a generation.

Some saw the Fed's extraordinary move as a decision to move hard and early because it expected further economic damage from the spread of the coronavirus.

"They have signaled willingness to take further action, which is why we are seeing a further rally in bonds," Tim Drayson, head of economics at Legal & General Investment Management, told Reuters. "Some argue that monetary policy can't fight the supply shock – but it will support demand and confidence."

The dollar hovered near five-month lows versus the yen on Wednesday. The greenback also traded near the lowest in almost two years against the Swiss franc, with investors flocking to traditional safe havens. The euro was one of the currencies to benefit most from the broad-based dollar weakness.

With safe-haven currencies in demand, the dollar clawed back some ground from nearly five-month lows versus the yen and fell to its lowest against the Swiss franc in almost two years. It was flat against a basket of six major currencies.

The Euro STOXX 600 gained 1.5%, on course for a third straight day of gains. Markets in Frankfurt, London and Paris gained a similar amount.

The European moves built on gains in Asia, where MSCI’s broadest index of shares outside Japan rose 0.3%. Korean stocks gained 2% on a $9.8 billion government stimulus package to mitigate the coronavirus impact.

The MSCI world equity index, which tracks shares in 49 countries, gained 0.2%. It is still down around 10% following a brutal sell-off last week as fears over economic damage from the coronavirus gripped markets.

Given the flood of central bank money in recent years, coordinated action by the major central banks would mainly have a calming effect, showing that they are capable of action.

"A central bank must leave no doubt that it is determined to act and capable of making a difference. Otherwise, the uncertainty in the system will only multiply," Pierre Wunsch, head of the Belgian central bank, was cited as saying by the German Press Agency (DPA).

Marcel Fratzscher, president of the German Institute for Economic Research (DIW) in Berlin, said monetary policy has limited influence. "Unlike in the global financial crisis, the central banks will be able to do little to help combat the economic damage caused by the coronavirus. That's because the biggest economic problem is a collapse of global value chains and a lack of consumer confidence," Fratzscher said.

Traders believe the Fed is not done. Futures tied to the Fed’s policy rate were pricing in another rate cut by June, even though investors and the Fed itself raised doubts that easing will help deal with a public health crisis. Fed policymakers will provide their own rate path expectations, along with forecasts for economic growth, at the end of their March 17-18 meeting.

Fears of a recession have also put pressure on other central banks to follow in the footsteps of the Fed and ramp up stimulus at this month’s rate review.

Some have already taken action. Earlier on Tuesday, central banks in Australia and Malaysia cut rates and on Monday the Bank of Japan took steps to provide liquidity to stabilize financial markets there. It is providing commercial banks with additional liquidity through the temporary purchase of government bonds worth 500 billion yen ($4.6 billion).

Markets are pricing that the BoJ would slash its rates, currently standing at negative 0.10%, by 10 basis points. BoJ Governor Haruhiko Kuroda stressed Wednesday the central bank was ready to take “appropriate action” to underpin a fragile recovery.

Both ECB and BoE are also expected to slash their key rates at their meetings this month. Traders see a 90% chance the ECB will cut rates by 10 basis points next week, with some expecting ECB President Christine Lagarde could also announce additional measures.

Money markets have moved to fully price in a BoE rate cut of 25 basis points at its next meeting, up from a chance of 80% before the Fed move.

Following in the Fed’s footsteps, the central banks of Qatar, Moldova, Jordan and Latvia on Wednesday cut their key interest rates. South Korea’s central bank is also expected to do the same at this month’s meeting.

The coronavirus has killed around 3,000 people, about 3.4% of those infected – far above the seasonal flu’s fatality rate of under 1%. It continues to spread beyond China, with Italy reporting a jump in deaths to 79 and South Korea reporting more than 500 new cases on Wednesday.