White House, Fed rolling out big plans to save US economy 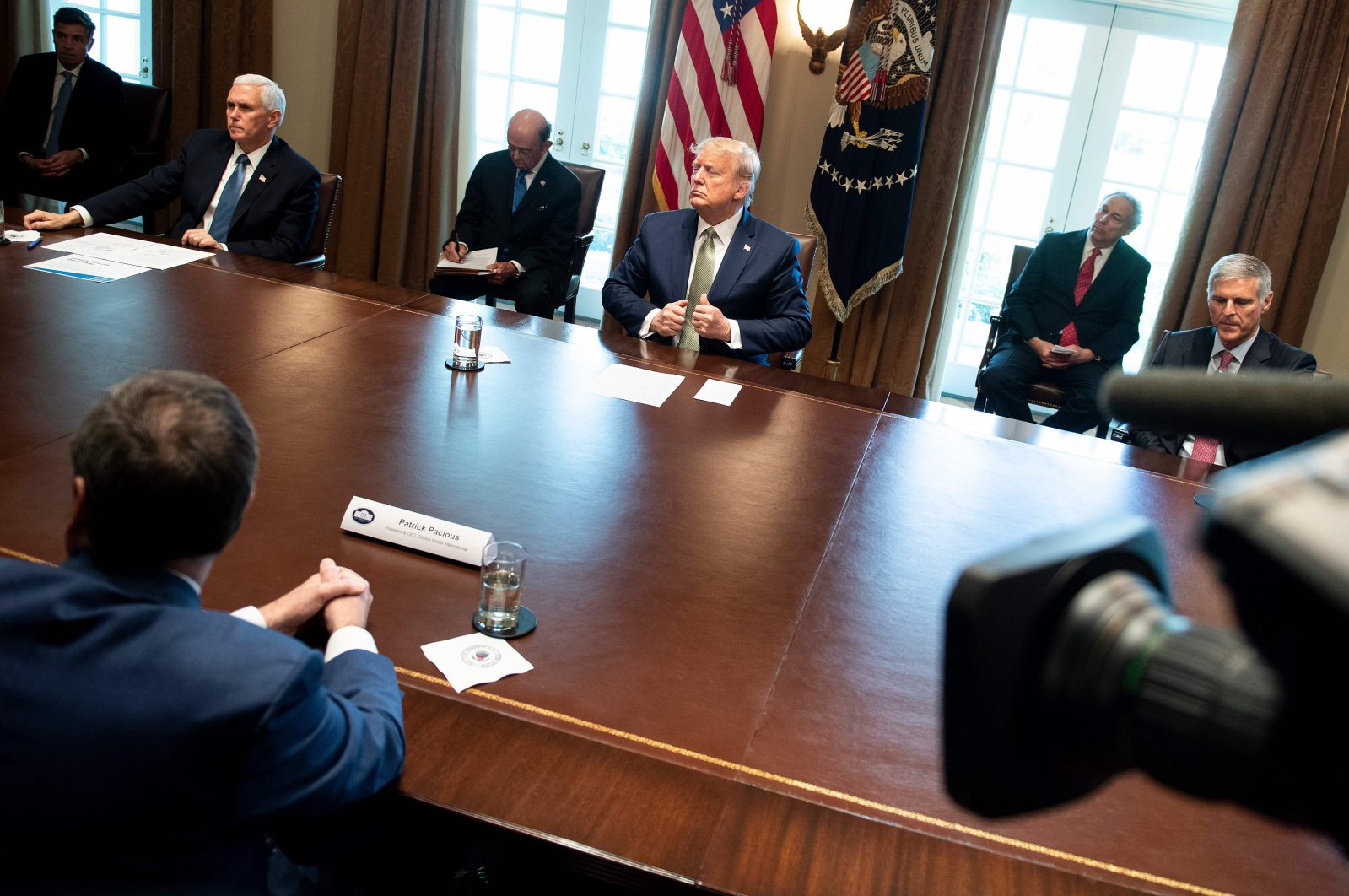 U.S. President Donald Trump and U.S. Vice President Mike Pence listen during a meeting with hotel and tourism executives in the Cabinet Room of the White House about the effect of the novel coronavirus epidemic, Tuesday, March 17, 2020. (AFP Photo)
by Compiled from Wire Services Mar 18, 2020 11:33 am
RECOMMENDED

U.S. President Donald Trump is drawing up a massive emergency spending package while the Federal Reserve is opening the financing floodgates to contain the growing economic damage from the coronavirus pandemic.

After downplaying the severity of the outbreak for weeks, Trump on Tuesday called for bipartisan support to rush out immediate cash payments to American families.

"We don't want people losing jobs and having no money to live," Trump said at a White House news conference, adding that the package "is a substantial number. We are going big."

The Trump administration pressed for the enactment of a $1 trillion stimulus package, possibly to include $1,000 direct payments to individual Americans, to blunt the economic pain from a coronavirus outbreak that has killed over 100 people in the country.

With businesses shutting down nationwide due to the spreading pandemic, Americans need "cash now," Treasury Secretary Steven Mnuchin said at the White House. "We are looking at sending checks to Americans immediately ... I mean now, in the next two weeks," he said.

He warned Republican senators on Tuesday morning that the pandemic could drive U.S. unemployment to 20%, a Republican Senate source told CNN.

That would be double the worst point of the financial crisis about a decade ago.

Speaking on Capitol Hill, Mnuchin said the package could surpass $1 trillion, in addition to $300 billion in deferred tax payments, making it among the largest federal emergency plans ever and far surpassing assistance during the 2008 global financial meltdown.

Worse than 9/11 for airlines

The situation has worsened for airlines this week as governments have tightened travel restrictions.

Mnuchin said that, for airlines, "this is worse than 9/11," with travel virtually ceased.

The outbreak has wiped 41%, or $157 billion, off the share value of the world’s 116 listed airlines, with many using up their cash so fast they can now cover less than two months of expenses, a Reuters analysis showed.

With airlines halting plane deliveries and new orders to conserve cash, Boeing Co. called on the U.S. government to provide at least $60 billion in access to liquidity, including loan guarantees, for the aerospace manufacturing industry.

U.S. carriers have already asked Washington for $50 billion in grants and loans, plus tens of billions in tax relief.

Trump said that travel restrictions within the United States are being considered, which would be a further blow to its domestic carriers. “You can do a national lockdown. Hopefully, we’re not going to need that,” Trump said. “It’s a very big step.”

U.S. airlines are seeking to quickly reduce their workforces through early retirement packages or unpaid leave of up to 12 months with medical benefits in a further sign that airlines do not expect a quick rebound and must cut costs.

S&P Global Ratings said global passenger numbers were expected to decline by up to 30% this year and a full recovery was not likely until 2022 or 2023.

And while Republicans balked at a large stimulus package in 2008, over concerns about the government deficit, Mnuchin told reporters "this is not the time to worry about it."

"Congress right now should be worried about American workers and small businesses."

The independent Congressional Budget Office last month said the deficit is expected to swell this year to more than $1 trillion and remain above that level for a decade as government debt balloons.

The talk of stimulus cheered battered Wall Street indices, with the Dow closing the day up 5.2% after Monday saw its worst drop since 1987.

The U.S. central bank in the past two weeks has moved aggressively to boost confidence and keep financial markets and the U.S. economy from seizing up due to fear and a shortage of cash, acting far more quickly than it did during the 2008 turmoil.

The Fed on Sunday slashed the benchmark borrowing rate to zero, ramped up purchases of Treasury debt, and repeatedly made massive cash infusions into financial markets.

"By ensuring the smooth functioning of this market, particularly in times of strain, the Federal Reserve is providing credit that will support families, businesses, and jobs across the economy," the Fed said in a statement.

One mechanism is aimed at providing short-term funding to major financial institutions so they can push cash out to businesses and households. The other would allow companies to roll over commercial debt and repay investors.

The more than $1 trillion market for commercial paper "is critical to the plumbing of the financial system" and will allow firms to continue paying their bills and their workers, said economist Mickey Levy of Berenberg Capital Markets, who applauded the moves.

Though slow to react over a decade ago, "this time is very likely to be far different, as the Fed's aggressive action is expected to achieve quicker results, even as the acute stage of the pandemic generates deep economic contraction," Levy said in an analysis.

Mnuchin presented the stimulus plan to Senate Republicans, but it is unclear when it will be ready for a vote.

Senators Bernie Sanders and Elizabeth Warren, current and former Democratic presidential candidates, warned that any bailout to airlines must come with strings attached, including a $15 hourly wage for workers.

The White House package would be in addition to the $100 billion House measure directed at paid sick leave and expanded unemployment benefits already moving through Congress.

Trump again acknowledged that the economy could be headed for a recession but said it would come back strongly once the virus is defeated.

"We're going to take care of it, we'll be bigger, stronger and better than ever before," the president said.