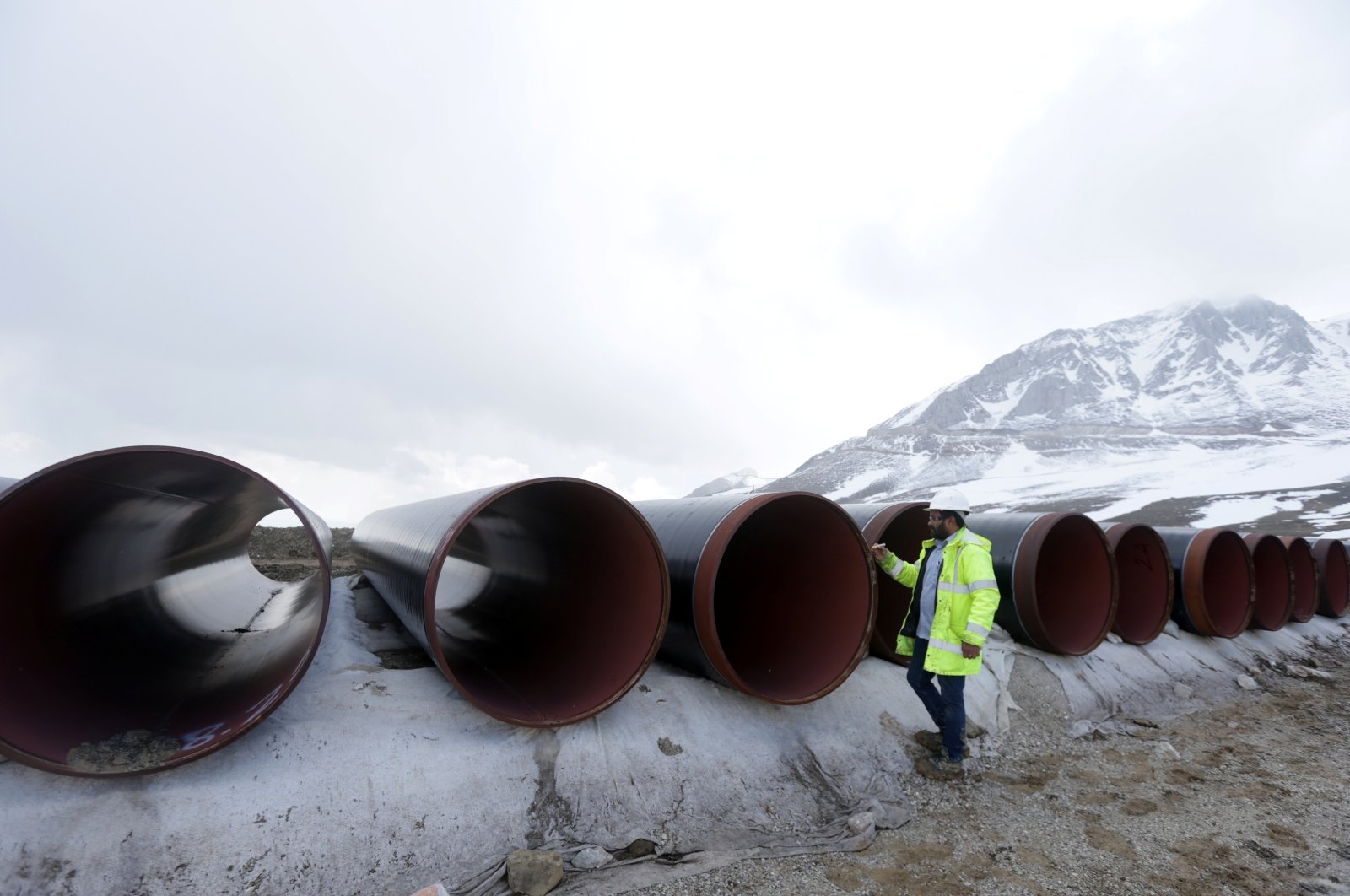 A local employee marks pipes at the nearby Marta Pass, the highest point of the Trans Adriatic Pipeline (TAP) in Korce, Albania, April 17, 2019. (Reuters Photo)
by DAILY SABAH WITH AA Oct 13, 2020 11:18 am
Edited By Ayşe Betül Bal
RECOMMENDED

The Trans Adriatic Pipeline (TAP), the European leg of the Southern Gas Corridor (SGC), is ready to deliver gas almost 4 1/2 years after the start of its construction, its managing company announced Monday.

According to a statement by the Trans Adriatic Pipeline AG, TAP has been filled with natural gas from the Greek-Turkish border up to the pipeline-receiving terminal in southern Italy.

"TAP is currently finalizing preparations for launching the commercial operations and offering capacity to the markets," the company said.

It added that the interconnection point between the TAP pipeline and the natural gas transmission system of Snam Rete Gas in Puglia of Italy is due for completion and should be ready to transport gas by mid-November 2020.

TAP will transport natural gas from the giant Shah Deniz II field in the Azerbaijani sector of the Caspian Sea to Europe.

The 878-kilometer-long (545.5-mile-long) pipeline connects with the Trans Anatolian Natural Gas Pipeline (TANAP) at the Turkish-Greek border in Kipoi and crosses Greece, Albania and the Adriatic Sea before coming ashore in southern Italy.

The TANAP, a significant joint project between Ankara and Baku, is the Turkey leg of the SGC and was inaugurated by President Recep Tayyip Erdoğan and Azerbaijani President Ilham Aliyev in June 2018. It started pumping gas to the Turkish network days after its inauguration. The ceremony for TANAP's connection to the European section, TAP, was held on Nov. 30 in Turkey's Edirne near the Greek border with the participation of Erdoğan, Aliyev and other dignitaries from regional countries.

TANAP runs from the Turkish border with Georgia, crosses 20 Turkish provinces and ends at the Greek border in Edirne in Thrace. It has an annual capacity of 16 billion cubic meters (bcm), of which 6 bcm will be delivered to Turkey while the remaining 10 bcm is destined for European markets via TAP.

"With this project (TANAP) we are creating a new energy map of Europe," Aliyev said in May 2018 during a nationally televised inauguration ceremony where he turned on the taps at Sangachal Terminal, located some 55 kilometers southwest of the capital Baku.

As a key part of the SGC, TAP is strategically and economically important to Europe and essential in providing reliable access to a new source of natural gas. Once it begins to pump gas, TAP will lay the foundation of the first-ever direct transport of Azerbaijani natural gas from the Caspian basin to European markets.

TAP’s shareholding consists of British energy giant BP, Azerbaijani state-owned petroleum company SOCAR and Italian gas company Snam, each with a 20% share, as well as Fluxys with 19%, Enagas with 16% and Axpo with 5%.