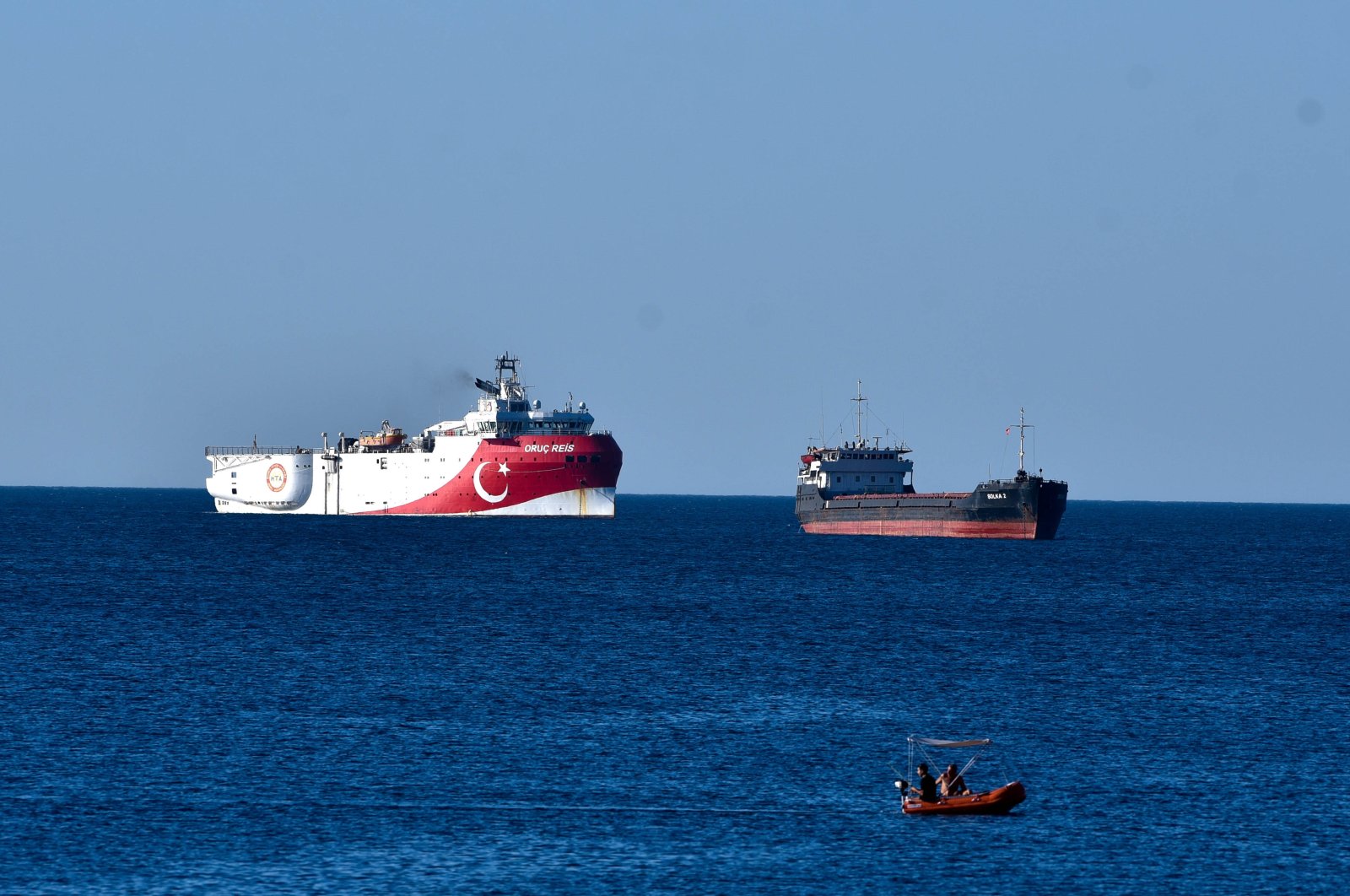 Energy experts say the region where Turkey’s seismic survey vessel Oruç Reis operates is not within the Greek exclusive economic zone as defined by the U.N. regulation on continental shelves

The region where Turkey’s seismic survey vessel Oruç Reis operates is not within the Greek exclusive economic zone (EEZ) as arguments by Athens on the islands’ continental shelf rights do not correspond to international law, Mehmet Efe Biresselioğlu, the head of Sustainable Energy Division and Faculty member of Political Science and International Relations Department of the Izmir University of Economics, said.

Contesting the Greek contrary declarations, Biresselioğlu urged that Greece abide by the principle of ‘equitable sharing' since it is a signatory of the United Nations Convention on the Law of the Sea (UNCLOS).

As part of its hydrocarbon exploration activities, Turkey’s navy on June 21 issued an advisory, known as NAVTEX, for seismic surveys by Oruç Reis and two support vessels in waters south of the Greek islands of Rhodes, Karpathos and Kastellorizo (Meis in Turkish, Megisti in Greek) through Aug. 2.

This makes “Greece’s maximalist continental shelf claims based on islands far from its mainland incompatible with international law and court decisions,” the Foreign Ministry said Wednesday.

The Greek statement is based on its maritime principle according to which islets are viewed as "mainland;" however, such views do not correspond to international law.

The principle of equidistance does not hold value in the context of delimitation of EEZs and continental shelves in international law.

The fundamental rule in both international law and the UNCLOS is based on the principle of equal sharing. This principle enables islands to have relatively less area of continental shelf and EEZ, in fact, the islands might even get completely surrounded. At this point, there are multiple factors taken into consideration, such as the size and location of these landscapes, and their distance to the mainland.

In addition, the marine space the Turkish vessel is set to explore falls under the continental shelf Ankara administration declared to the U.N. and license blocks granted to Turkish Petroleum Corporation (TPAO) – Turkey's national oil company – in 2012.

Oruç Reis remains anchored at the port of Antalya, in southeastern Turkey, but a navigational telex issued by the port says the mission planned through Aug. 2 remains “valid and effective.”

Hakan Karan, a professor at Ankara University's Faculty of Law, said the distance of islands to the mainland and their closeness to other countries stands as the most important aspect of such special conditions.

Referring to the islands far away from the mainland and close to other countries, he said the international law does not authorize, or barely authorizes, countries to establish maritime boundaries.

He went on to say that the Kastellorizo island was a typical example in this sense and Greek claims of declaring boundaries violated the principle of equity.

“An island with less than 12 square kilometers area of surface, located 2 kilometers to Turkey and 580 kilometers away from Greece cannot be granted continental shelf or EEZ,” he was cited as saying by Anadolu Agency (AA).

He further noted that the International Court of Justice (ICJ) recently adopted a prejudication regarding the maritime border dispute between Romania and Ukraine, saying the Snake Island – which belongs to Ukraine but is closer to Romania – had no effect in the context of demarcation.

According to international conventions, Energy Law Research Institute Chairman Süleyman Boşça said that littoral states have rights on a continental shelf that is 200 miles away from the country’s baseline.

Boşça noted that it is a natural right that does not need to be declared.

He argued that in the current situation, the islands that belong to Greece are on the natural extension of Turkey and therefore cannot be considered a continental shelf.

On the other hand, he stressed this approach would be contrary to the rule in the Lausanne Treaty that Turkey and Greece benefit equally from the Aegean Sea.

Boşça also recalled that Turkey delivered geographic coordinates regarding the continental shelf to the United Nations in February after the last November’s agreement with the internationally recognized government of Libya on the maritime boundaries of the two countries in the Eastern Mediterranean.

Boşça said the areas that Turkey is focusing its studies on with the Oruç Reis are parts where Turkish Petroleum Corporation was granted seven licenses, and which fall under the maritime zone pact between Turkey and Libya.

İzmir University of Economics's Biresselioğlu suggested that the activities of Oruç Reis do not violate Greece’s EEZ as defined by the U.N. regulation on continental shelves.

“Greece is obliged to abide by the ‘equitable principles’ of the United Nations Convention on the Law of the Sea. The distance of islands to the mainland, their size and lengths are determinant factors in the application of this principle. The distance between Greece and Kastellorizo island is 580 kilometers, while it is located only two kilometers away from Turkey’s mainland," he noted. “The Greek claims over a continental shelf that covers tens of thousands of square kilometers are completely against the ‘equitable share’ principle of the UNCLOS of which Greece is a signatory state."

Research Center For Energy Strategies and Policies of Turkey (TESPAM) director Oğuzhan Akyener said that determining continental shelf based on remote islands is against the international law.

He noted that land frontage, distance to the mainland and location are the main criteria of continental shelves. "Within this context, Greek side’s claims are null and void in terms of international law,” he said.

“There are many precedent agreements on the issue including accords between Greece and Italy, England and France, Nicaragua and Colombia, Libya and Malta, Tunisia and Italy and Papua New Guinea and Australia,” he said.