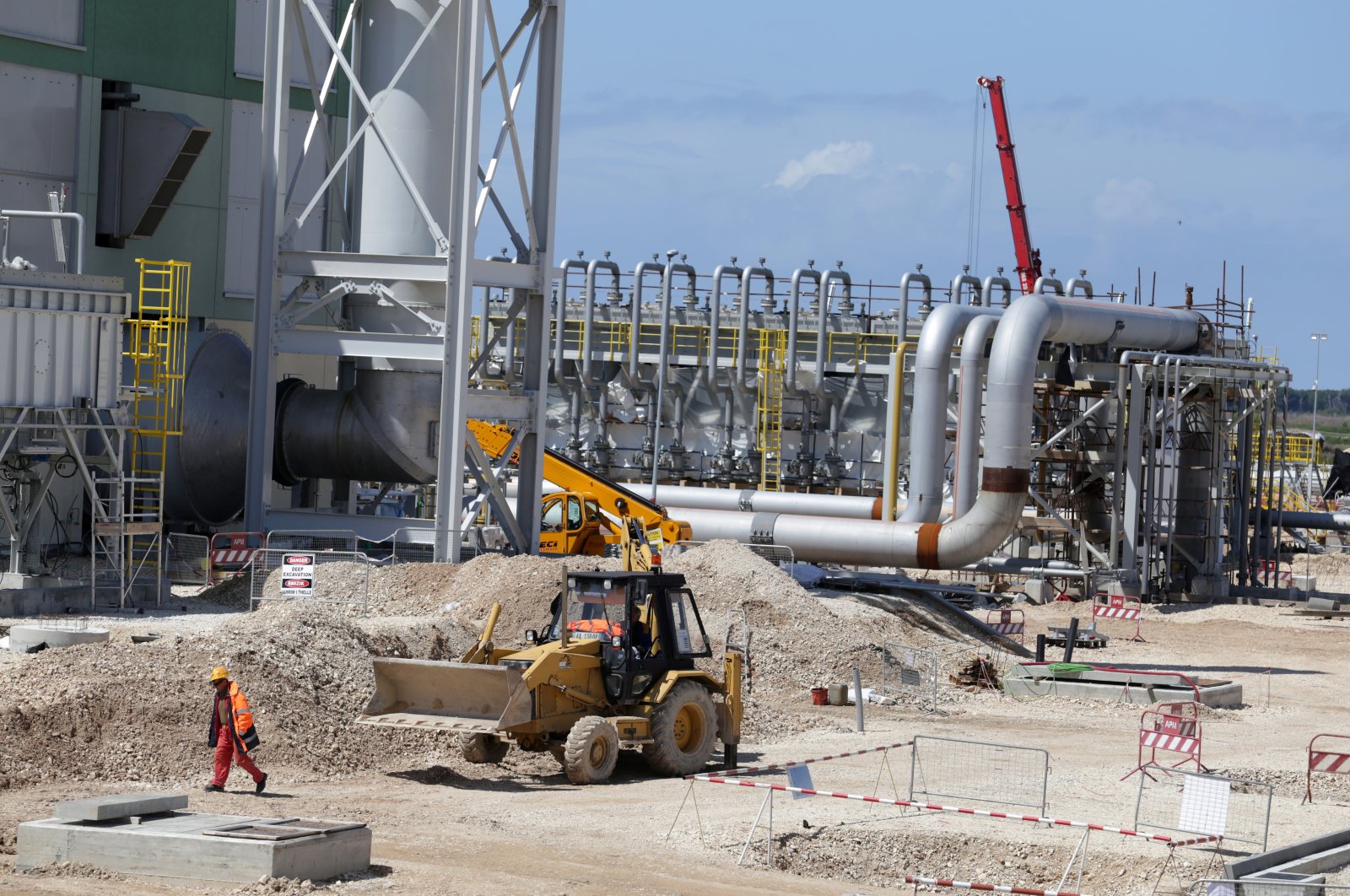 A local employee walks at a compressor station of the Trans Adriatic Pipeline (TAP) in Seman near Fier, Albania, April 11, 2019. (Reuters Photo)
by DAILY SABAH WITH AGENCIES Dec 31, 2020 3:18 pm
RECOMMENDED

“Today is a historic day for our project, as well as for our host countries and Europe’s energy landscape,” said Luca Schieppati, TAP’s managing director.

“The TAP is an essential part of the continent’s gas network, contributing to the energy transition road map. We offer a reliable, direct and cost-effective transportation route to South East European countries and beyond,” Schieppati said in a statement.

The project has the backing of the European Commission as part of efforts to curb Europe’s dependence on Russian energy.

Russia controls 34% of Europe’s gas market and plans to raise gas exports to Europe, including Turkey, to 183 billion cubic meters (bcm) next year from the 171-172 bcm expected this year.

The TAP is a part of the $40 billion (TL 297 billion) Southern Gas Corridor (SGC), stretching 3,500 kilometers (2,175 miles) from Azerbaijan to Europe and drawing from Azerbaijan’s giant Shah Deniz II field in the Caspian Sea.

The 878-kilometer pipeline connects with the Trans-Anatolian Natural Gas Pipeline (TANAP) at the Turkish-Greek border in Kipoi and crosses Greece, Albania and the Adriatic Sea before coming ashore in southern Italy.

The TANAP, a significant joint project between Ankara and Baku, is the Turkey leg of the SGC and was inaugurated by President Recep Tayyip Erdoğan and Azerbaijani President Ilham Aliyev in June 2018.

It started pumping gas to the Turkish network days after its inauguration. The ceremony for TANAP's connection to the European section, the TAP, was held on Nov. 30 in Turkey’s Edirne near the Greek border with the participation of Erdoğan, Aliyev and other dignitaries from regional countries.

The TANAP runs from the Turkish border with Georgia, crosses 20 Turkish provinces and ends at the Greek border in Edirne in Thrace. It has an annual capacity of 16 bcm, of which 6 bcm will be delivered to Turkey, while the remaining is destined for European markets via the TAP.

Azerbaijan aims to supply European gas markets with 10 bcm of gas a year, including 8 bcm to Italy and a combined 2 bcm to Greece and Bulgaria.

“The Southern Gas Corridor will strengthen the system of global energy security. It has connected the Caspian region to Europe,” the Energy Ministry said in a statement.

Rovnag Abdullayev, head of Azerbaijani state-owned petroleum company SOCAR, hailed the start of the gas sales to Europe as a “historic day.”

"While we look forward to providing transportation services to shippers in the upcoming months and years, we also look forward to launching the second phase of our market test in the summer, which will enable the future expansion of the TAP, doubling the pipeline’s capacity to 20 bcm,” Savova noted.

Analysts have said Azerbaijani gas poses a threat to Moscow’s share of the region’s gas market.

The project stalled a year ago due to sanctions from the United States. Russia resumed construction, albeit slowly, earlier this month.

The TAP stakeholders are British energy giant BP, SOCAR and Italian gas company Snam, with a 20% holding each, plus Fluxys with a 19% stake, Enagas with 16% and Axpo with 5%.

The first phase of the Shah Deniz field began production in 2006, delivering more than 10 bcm a year of gas to Azerbaijan, Georgia and Turkey.

The second phase started output in 2018, adding 16 bcm of gas production capacity at its peak to bring the total capacity to 26 bcm.