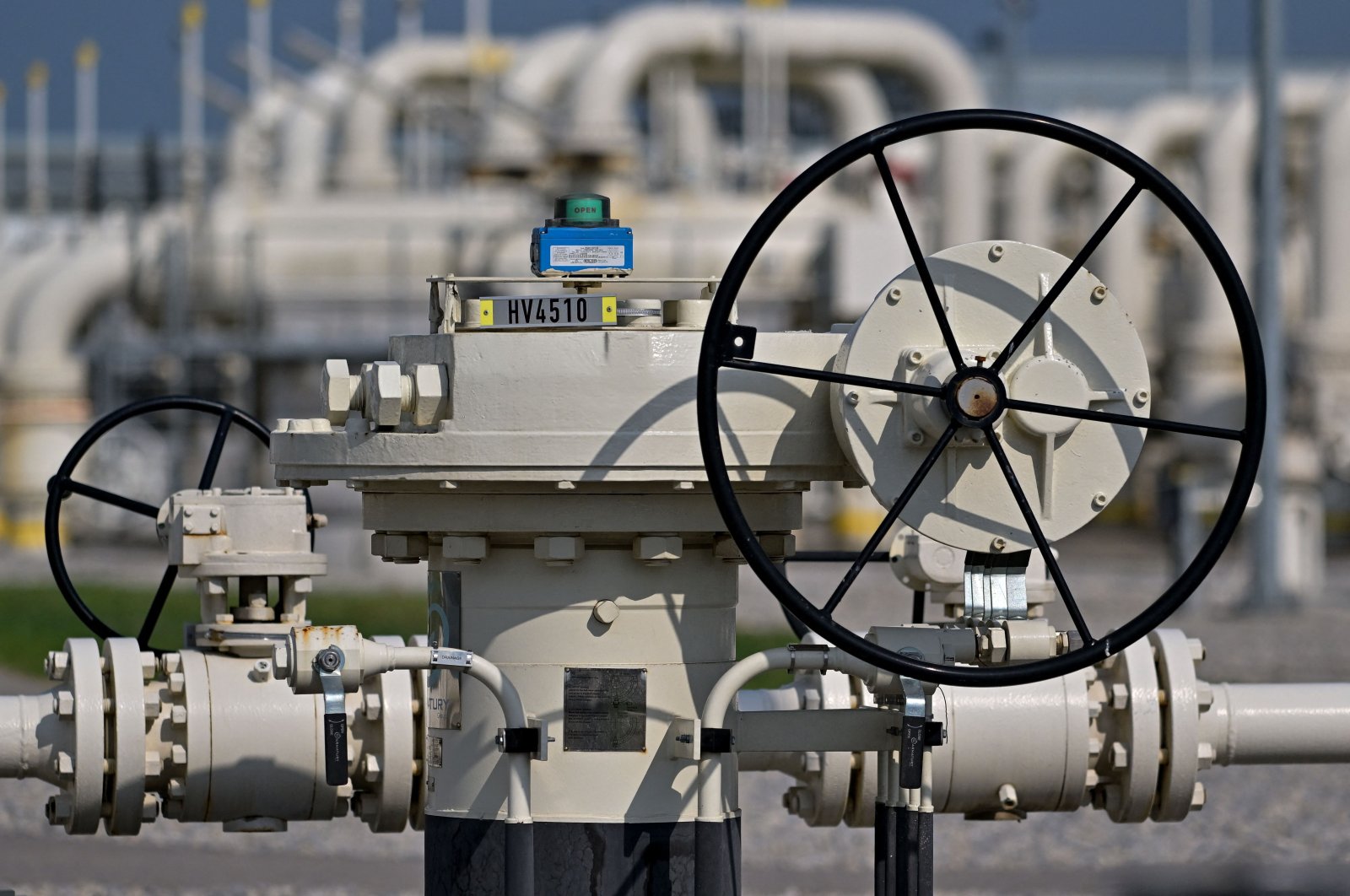 Equipment operated by Gas Connect Austria (GCA ) and Trans Austria Gas pipelines (TAG) at one of the largest interconnection gas hubs in Europe at Baumgarten an der March, Lower Austria, May 9, 2022. (AFP Photo)
by Reuters May 12, 2022 3:50 pm
RECOMMENDED

It also imposed sanctions on the owner of the Polish part of the Yamal-Europe pipeline that carries Russian gas to Europe.

Kremlin spokesperson Dmitry Peskov said there can be no relations with the companies affected nor can they take part in supplying Russian gas.

The entities on a list of affected firms on a Russian government website were largely based in countries that have imposed sanctions on Russia in response to its invasion of Ukraine, most of them members of the European Union.

Germany, Russia's top client in Europe, said some subsidiaries of Gazprom Germania were receiving no gas because of the sanctions, but are seeking alternatives.

"Gazprom and its subsidiaries are affected," Habeck told the Bundestag lower house. "This means some of the subsidiaries are getting no more gas from Russia. But the market is offering alternatives."

The list includes Germany's biggest gas storage facility at Rehden in Lower Saxony, with 4 billion cubic meters of capacity and operated by Astora, as well as Wingas, a trader that supplies industry and local utilities.

Wingas has said it would continue operating but would be exposed to shortages. Rivals Uniper, VNG or RWE could be potential sources of supply to the market. Gas flows continue to Germany from Russia via the Nord Stream 1 pipeline.

The owner of Poland's section of the Yamal pipeline, EuRoPol Gaz, has been earning proceeds from the transit of Russian gas. It is jointly owned by Polish gas firm PGNiG and Gazprom.

While Poland, along with Bulgaria, was cut off from Russian supplies last month for refusing to comply with a new payment mechanism, it has been able to use the reverse flow on the Yamal pipeline to ship gas from Germany.

Exit flows into Poland at the Mallnow metering point on the German border stood at 9,734,151 kilowatt-hours per hour (kWh/h) on Thursday, down from roughly 10,400,000 kWh/h the previous day, data from the Gascade pipeline operator showed.

Last year, EU countries got around 155 billion cubic meters of gas from Russia.

Dutch gas prices at the TTF hub, the European benchmark, rose by around 20% on Thursday morning.

Germany's Halbeck said Russia's measures seemed designed to drive up prices but the expected 3% drop in Russian gas deliveries could be compensated for on the market, albeit at a higher cost.

European wholesale gas prices have skyrocketed over the past year, adding to burdens on households and businesses.

Although German gas storage is around 40% full, that is still low for the time of year and inventories need to be built up over the summer in preparation for winter.

Moscow announced the sanctions the day after Ukraine halted a major gas transit route to Europe, blaming interference by occupying Russian forces, the first time exports via Ukraine have been disrupted since the invasion.

The transit point Ukraine shut usually handles about 8% of Russian gas flows to Europe, and Ukraine proposed that flows could be re-directed to an alternative transit point, Sudzha.

On Thursday morning, flows through Sudzha had fallen to 53 million cubic meters (mcm) per day, from around 70 mcm the day before, Ukraine gas transmission operator data showed.

However, the Ukrainian suspension does not present an immediate gas supply issue, the European Commission said.

Meanwhile, there is still confusion among EU gas companies over a payment scheme decreed by Moscow in March, which the European Commission has said would breach EU sanctions.

Germany's top power producer, RWE, expects Berlin to soon clarify whether payments for Russian gas can be made under the new scheme proposed by Moscow, its finance chief said on Thursday, as a deadline approaches at the end of the month.

Russia's demand that future payments for its most precious fossil fuel be made in rubles has been rejected by most European gas buyers over the details of the process, which requires opening accounts with Gazprombank.

That has fueled fears about potential supply disruptions should buyers refuse to meet the guidelines to avoid breaching sanctions, which could have far-reaching consequences for Europe and Germany, in particular, which relies heavily on Russian gas.