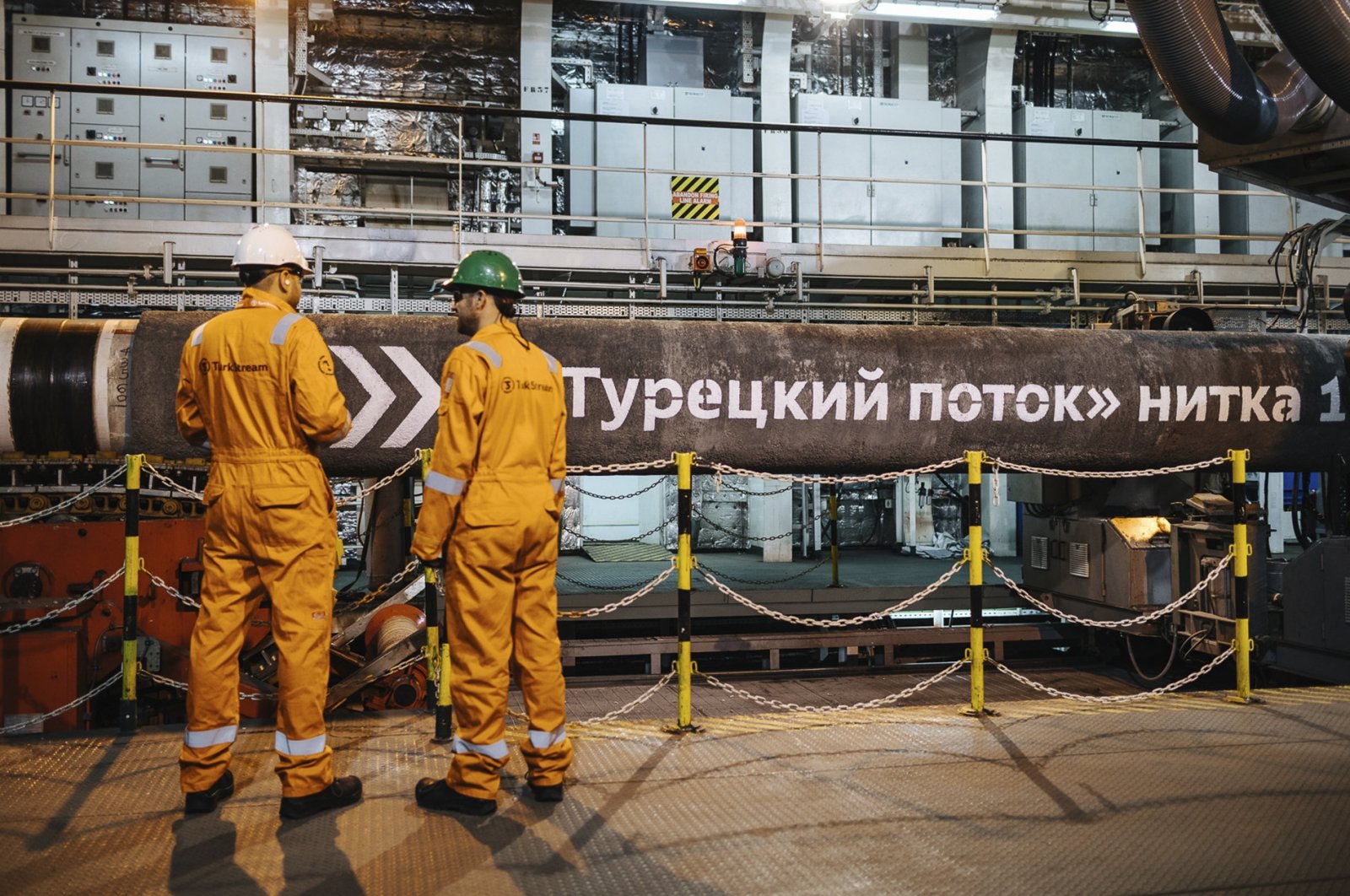 This file photo shows workers in front of pipes to be laid on the Black Sea seabed by the vessel Pioneering Spirit as part of the TurkStream gas pipeline project, Feb. 5, 2018. (AA Photo)
by DAILY SABAH Dec 23, 2020 12:17 pm
RECOMMENDED

Russian energy giant Gazprom is currently in talks with its Turkish partners to carry natural gas deliveries via the TurkStream pipeline to more European markets.

"We are now in talks on the issue with our Turkish colleagues," said Elena Burmistrova, chief executive of the Russian holding’s export arm, Gazprom Export, during a conference with investment banks Tuesday, as cited by Russia’s TASS news agency.

Burmistrova had previously said that Gazprom may consider delivering some of TurkStream’s gas to more of Europe, on the condition that the demand for gas in the country continues to decline. Gas purchases in Turkey declined significantly since 2019 for several internal reasons, including the steps taken to diversify the supply chains and benefit from excessive supplies of cheaper liquefied natural gas (LNG).

Gazprom enjoyed the highest figure of sales to Turkey in 2017, when the Russian company delivered about 29 billion cubic meters (bcm) of natural gas to the country, making it the second-biggest market after Germany. The energy giant’s pipeline natural gas exports to Turkey are expected to decrease to between 8-9 bcm this year, its lowest level since the 1990s.

Commercial deliveries via the pipeline started on Jan. 1, 2020. President Recep Tayyip Erdoğan and his Russian counterpart Vladimir Putin held the official opening ceremony of the TurkStream on Jan. 8.

The throughput capacity of the 930-kilometer-long (580-mile) gas pipeline is 31.5 bcm of gas per year. While the first line with 15.75 bcm capacity is intended for Turkey, the other one is for Southern and Southeastern European nations.

Sadygov told Gazprom magazine that the company calculated a moderate increase in gas exports to the European market for its 2021 budget.

Gazprom's natural gas export revenue fell by 51.2% to $11.3 billion in the first half of the year compared with the same period in 2019, according to data from the Russian Federal Customs Service in August.

Over the first half, Gazprom's gas export volume via pipeline decreased by 17.8% to 91.1 bcm compared with the same period last year.

Moreover, Gazprom's export price for 1,000 cubic meters of natural gas fell by 13% to $82 in June compared with the previous month.

Gazprom's net profit decreased by 17% in 2019 compared with the previous year, falling to 1.2 trillion rubles (about $17 billion).