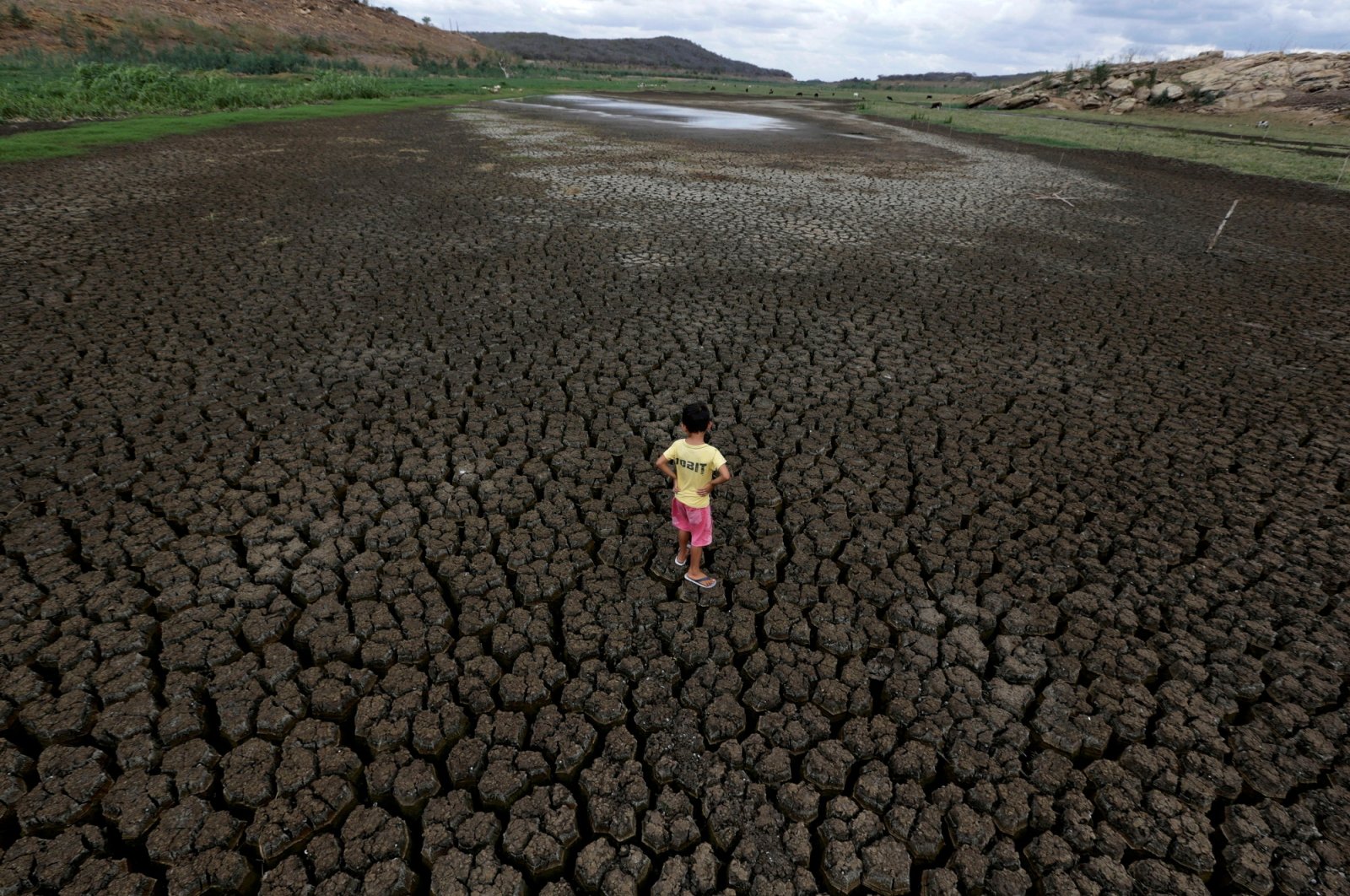 A boy stands on the cracked ground of the Boqueirao reservoir in the Metropolitan Region of Campina Grande, Paraiba state, Brazil, Feb. 13, 2017. (Reuters Photo)
by REUTERS Aug 13, 2021 9:56 am
RECOMMENDED

Severe droughts are drying up rivers and reservoirs vital for the production of zero-emissions hydropower in several countries around the globe, in some cases leading governments to rely more heavily on fossil fuels.

The emerging problems with hydropower production in places like the United States, China and Brazil represent what scientists and energy experts say is going to be a long-term issue for the industry as climate change triggers more erratic weather and makes water access less reliable.

They also could pose a threat to international ambitions to fight global warming by hindering one of the leading forms of existing clean power. Hydropower is the world's top source of clean energy and makes up close to 16% of world electricity generation, according to the International Energy Agency (IEA).

This year, climate-driven droughts have triggered the biggest disruptions in hydropower generation in decades in places like the western United States and Brazil. China is still recovering from the effects of last year's severe drought on hydro production in Yunnan province in the southwestern part of the country.

Elsewhere, too much water is the problem.

Last year in Malawi, for example, flooding and debris from megastorms forced two power stations to go offline, reducing hydropower capacity from 320 megawatts (MW) to 50 MW, according to the IEA.

Those effects have forced power grid operators to rely more heavily on thermal power plants, often fired by natural gas or coal, and to ask businesses to curtail electricity use to prevent outages, according to Reuters interviews with grid operators and regulators.

"When we're talking about hydropower we're really talking about making sure we have enough water to get electricity," said Kristen Averyt, a research professor focusing on climate resilience at the University of Nevada in Las Vegas. "What does that hydro generation get replaced with?"

In California, the State Water Project was forced to shut down a 750-MW hydroelectric power plant at Lake Oroville this month for the first time since it was built in 1967 because of low water levels. In good years, the plant can power half a million homes.

Power facilities at Lake Shasta, the largest reservoir in the federal government's Central Valley Project in California, were also generating about 30% less power than usual this summer, said Cary Fox, a team leader for the Bureau of Reclamation's operations in the state.

The lake usually provides about 710 MW during the summer, but in July was producing only 500 MW, Fox said.

At the huge 2,000 MW Hoover Dam on the Colorado River at the border of Nevada and Arizona, production was also down by about 25% last month, the agency said.

The order also allowed ships at port to use diesel generators instead of plugging into the grid and lifted restrictions on the amount of fuel natural gas plants can use to generate power.

Environmentalists have criticized the move, saying it will worsen air quality in California and undermine the state's efforts to fight climate change.

Tim Welch, director of hydropower research at the U.S. Department of Energy, said the department is researching ways that dams can more efficiently store water during rainy periods so it can be reserved for use during droughts.

Hydropower plants in the United States are capable of producing about 80 gigawatts (GW) of energy, about 7% of total energy production, Welch said.

In Brazil, where hydroelectric power is the top source of electricity at 61%, drought recently cut water flows into hydro dams to a 91-year low, the country's mines and energy minister said.

To offset the drop in hydropower, the country is seeking to activate thermoelectric plants, mainly powered by natural gas, threatening to drive up greenhouse gas emissions. In July, sector regulator Aneel raised the most expensive electricity rate by 52%, due to the drought crisis.

Severe weather events like the current drought will become increasingly frequent with climate change, and Brazilians will need to change their attitudes about water, said Jose Marengo, a climatologist at the government's disaster monitoring center.

"People always thought that water is unlimited, but it really isn't," Marengo said.

Brazil Mines and Energy Minister Bento Albuquerque said in an online briefing with reporters that a boom in the construction of power lines to reroute electricity to where it is needed and diversification away from hydro to solar and wind will help the country deal with such events in the future, and prevent the need for water rationing.

Even so, Brazil will remain reliant on hydropower for years. By 2030, the energy ministry predicts 49% of electricity will come from hydro. The country is also maintaining plans to build more hydro plants, exploring potential cross-border dam projects with Bolivia, Guyana and Argentina, as well as building 2 GW worth of small dams domestically.

Save the planet or harm it?

Last year's drought in China's Yunnan province slashed hydropower generation by nearly 30% during the first five months of 2020, according to official data. Output this year remains curtailed by around 10%.

Yunnan usually accounts for roughly a quarter of China's total hydro generation, and the province is home to several aluminum smelting businesses that require vast quantities of power to operate. The province restricted metal producers' power use earlier this year, forcing some smelting capacity to be temporarily shut.

A recent study by researchers in Nanjing looked at the potential impact of climate change and rising temperatures on hydropower generation in Yunnan. Their models showed decreases in rain and snowfall during the October-April drought season and increases in the summer rainy season.

To even out the variability, the researchers proposed more storage capacity – more dams and reservoirs.

But the diversions could worsen droughts elsewhere, according to experts. China's giant reservoirs on the upper reaches of the Mekong River in Yunnan have already been blamed for reducing downstream flows – affecting water access in Thailand, Cambodia and Myanmar.