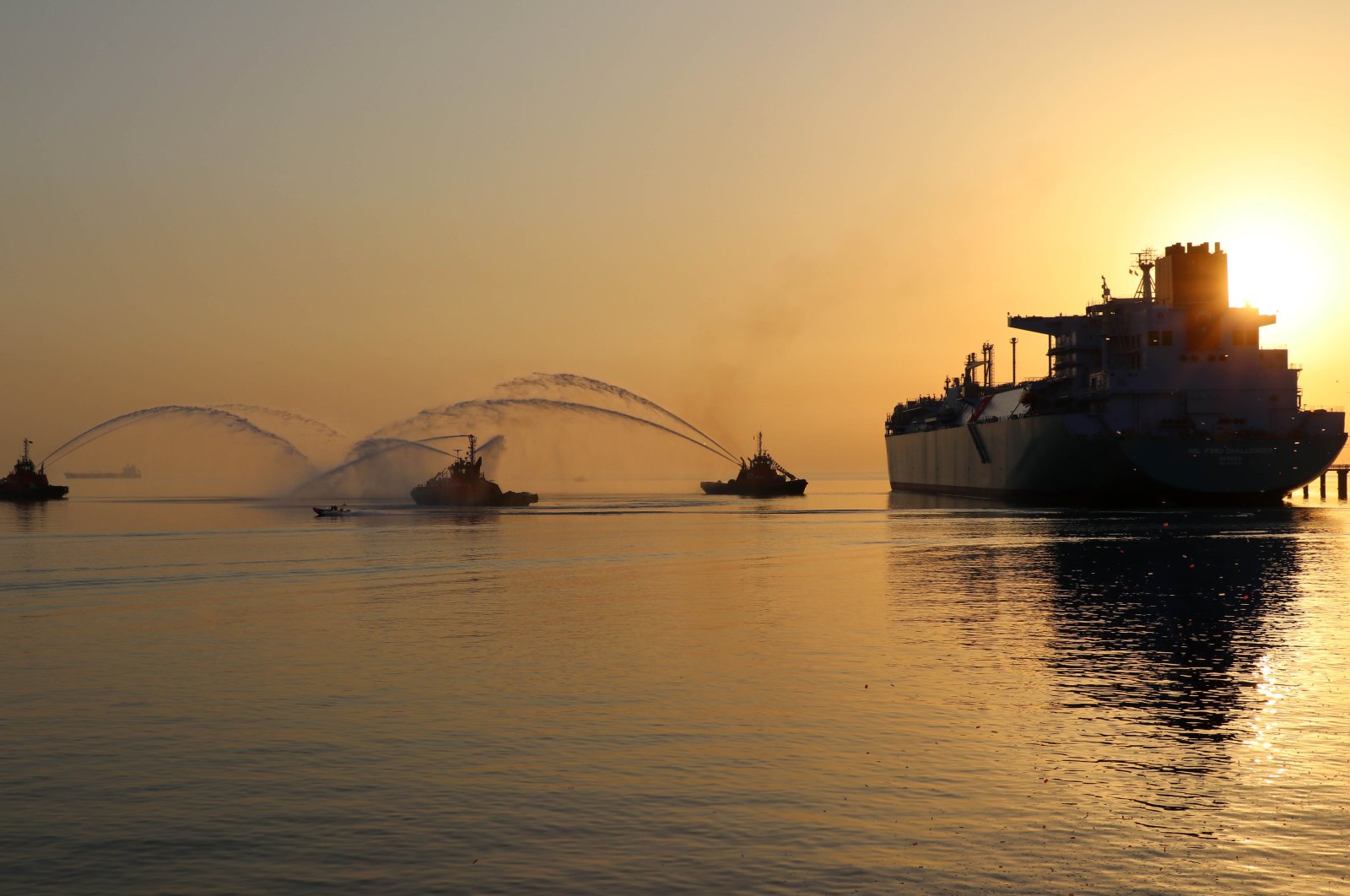 Turkey's second floating storage and regasification unit (FSRU) operated by BOTAŞ is seen in Dörtyol district of southeastern Turkey's Hatay on the Mediterranean coast in this undated photo. (AA Photo)
by Daily Sabah with Reuters May 15, 2020 1:07 pm
RECOMMENDED

In Russia, only state giant Gazprom can export natural gas via pipeline – a practice that has been long, but unsuccessfully, challenged by competitors – but private gas producer Novatek has the right to export LNG.

Supplies of Russian natural gas via pipelines and LNG are mainly sent to Europe and Asia but to different customers. Moscow has long said that its gas exports should not compete but rather complement each other.

However, with demand weak amid the coronavirus pandemic, super-cooled LNG is much cheaper than gas via the pipelines, where pricing terms are largely fixed.

According to two traders and LNG tracking data, Turkish state energy company BOTAŞ last month bought a Yamal LNG cargo in the spot market from Total, one of Novatek’s partners at the Yamal plant.

Rebecca Chia, an analyst with data intelligence firm Kpler which tracks LNG shipments globally, told Reuters that 65,000 tons of cargo originating from Yamal was delivered to BOTAŞ on April 13 after a ship-to-ship (STS) transfer.

Chia said that the only previous Yamal-origin LNG cargo was delivered to Turkey in early 2019.

One-third of 2020 gas supply to come from LNG

Turkey’s Deputy Energy and Natural Resources Minister Alparslan Bayraktar said at least one-third of the country's natural gas supply is expected to come from LNG in 2020.

Speaking in an Atlantic Council meeting Thursday, he said that 44% of gas came through LNG in the first four months of the year but that the number would come down in the coming months.

Bayraktar said 40% of LNG imports in the first four months had come from the United States, adding that this contributed to a $100 billion trade target between Turkey and the U.S.

Russia supplies gas to Turkey, one of its key customers, via the TurkStream and Blue Stream undersea pipelines, which have a total capacity of 32 billion cubic meters (bcm) per year.

Commercial supplies via the gas pipeline commenced on Jan. 1.

The project has a total capacity of 31.5 bcm. The first line with a capacity of 15.75 bcm is designated for supplies to Turkey's domestic customers, and the second line, with another 15.75 bcm capacity, carries Russian gas further to Europe through Bulgaria.

Over 1.32 bcm of Russian gas was transferred to Europe from Turkey via TurkStream during the first quarter of 2020, according to industry sources.

Gazprom sales to Turkey fell by 35% to 15.5 bcm last year, or half of the pipelines’ capacity. Gazprom planned maintenance at Blue Stream for May 13-19, but a Turkish official told Reuters works will be extended by 10 days.

A Turkish energy source told Reuters that BOTAŞ is expected to buy more LNG in the spot market, while the Blue Stream maintenance allowed the company to limit purchases from Gazprom.

“For BOTAŞ it makes sense to reduce pipeline imports from Russia and substitute this with spot LNG supplies as LNG is currently much cheaper,” said Carlos Torres Diaz, head of gas markets at Oslo-based energy consultancy Rystad Energy.

He estimates that the price for pipeline imports from Russia to Turkey will stand at around $6.5 per million British Thermal Units (MMBtu) in the second quarter compared to $1.50-$2 per MMBtu for spot LNG deliveries.

“A fall (in gas sales to Turkey) will be even deeper in the second quarter,” a Gazprom source told Reuters, adding that overall shipments to Europe, including Turkey, were down 19.2% year-on-year to 39.62 bcm in the first quarter.