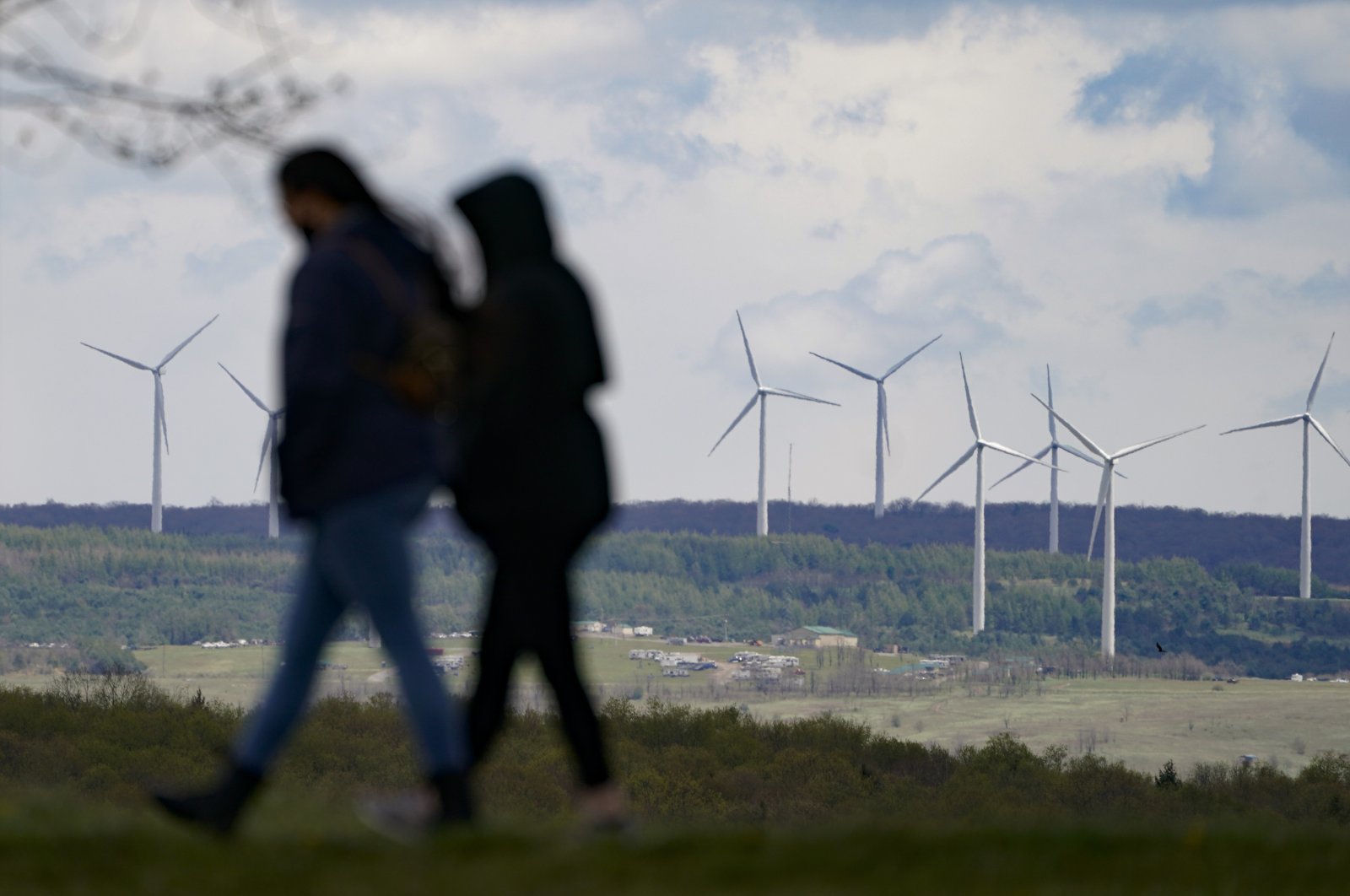 People are silhouetted as they stroll past power-generating wind turbines visible from a walking path at the Flight 93 National Memorial in Shanksville, Pennsylvania, U.S., May 8, 2021. (AP Photo)
by DAILY SABAH WITH AGENCIES May 11, 2021 12:53 pm
RECOMMENDED

Renewable energy grew at its fastest rate in two decades in 2020, driven primarily by gains in China and in wind power, the International Energy Agency (IEA) said in a report Tuesday.

Around 280 gigawatts (GW) of electricity production capacity was added last year, a 45% increase from the amount added in 2019, according to the IEA.

The biggest gain since 1999, and equivalent to total power production capacity in the 10 Southeast Asian nations in the ASEAN trade bloc, is set to become the new normal, the Renewable Energy Market Update – Outlook for 2021 and 2022 found.

“The increase in 2020 is set to become the ‘new normal,’ with about 270 GW of renewable capacity on course to be added in 2021 and almost 280 GW in 2022,” the IEA said, as nations step up their shift to renewable energy production to meet their obligations to reduce the production of greenhouse gasses.

The IEA revised its forecasts upwards by more than 25% from its previous estimates in November 2020. The more optimistic forecast comes as governments around the world have auctioned record levels of renewable capacity and companies have signed record-level power purchase agreements despite uncertainties in macroeconomics and falling energy demand due to the COVID-19 pandemic.

The remaining 31 GW of capacity additions came from hydro, geothermal, bioenergy and other resources.

“Last year, the increase in renewable capacity accounted for 90% of the entire global power sector’s expansion,” Fatih Birol, the executive director of the IEA, was quoted as saying.

He stressed that governments need to build on the promising momentum through policies that encourage greater investment in solar and wind, the additional grid infrastructure they will require, and other key renewable technologies like hydropower, bioenergy and geothermal.

“Wind and solar power are giving us more reasons to be optimistic about our climate goals as they break record after record,” Birol said.

China’s share in renewable power growth rose to 50% for the first time in 2020 due to a rush to complete projects before government subsidies were phased out, the IEA said.

China’s share in renewable capacity increases in the past several years reached about 40%.

The IEA expects a slowdown in renewable capacity additions in China in the first quarter of 2021 compared to the same period last year as wind and solar subsidies phased out at the end of 2020.

The country is expected to announce a new structure of incentive schemes towards the end of this year.

“Shifting power generation to renewable resources is a key pillar of global efforts to reach carbon neutrality,” the IEA said while warning that carbon dioxide emissions are set to rise this year because of a parallel rise in coal use, underscoring the major policy changes and investments in clean energy needed to meet climate goals.

The IEA announced that global carbon dioxide emissions fell by a record level of around 6% in 2020 with a reduction in global energy demand and fossil use due to lockdowns to prevent the spread of the global pandemic.

However, the data shows that emissions started to rebound in December 2020 when the global economy started to recover.

The growth in Europe and the United States will be brisker during this period compensating for China’s forecasted slowdown in renewables expansion.

Global solar power capacity is expected to increase by 145 GW this year and 162 GW in 2022, accounting for almost over 55% of all renewable energy expansions during this time.

The jump in solar power capacity will also be almost 50% higher than the pre-pandemic level achieved in 2019.

Although there is an expected slowdown in global wind capacity growth compared to last year’s 90% increase, the additional wind capacity will still be 50% higher than the 2017-2019 average, the IEA said.

“A massive expansion of clean electricity is essential to giving the world a chance of achieving its net-zero goals,” Birol highlighted.