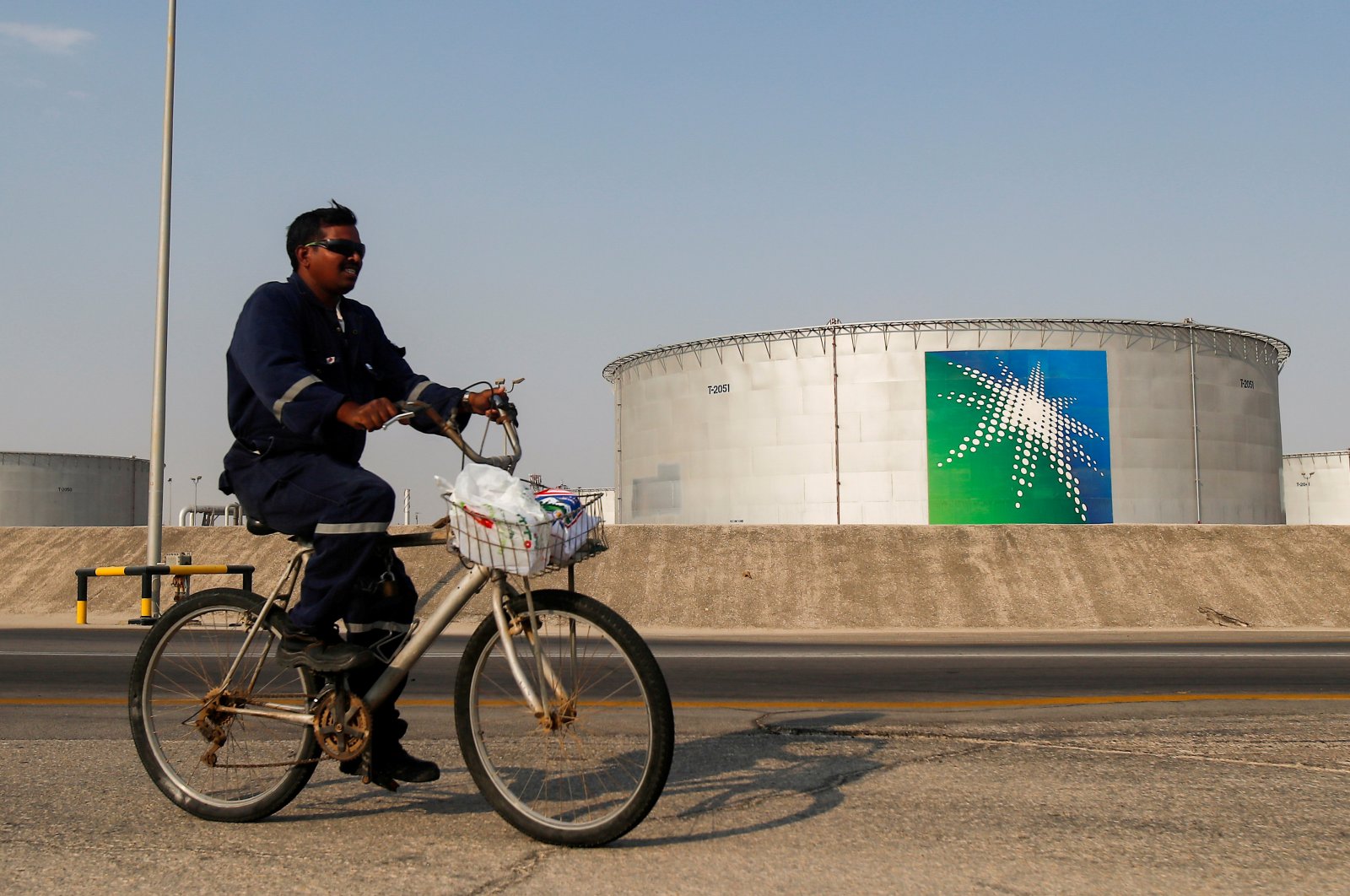 An employee rides a bicycle next to oil tanks at the Saudi Aramco oil facility in Abqaiq, Saudi Arabia, Oct. 12, 2019. (Reuters Photo)
by Compiled from Wire Services Apr 08, 2020 10:57 pm
RECOMMENDED

A group of Republicans in the U.S. House of Representatives told Saudi Crown Prince Mohammed bin Salman, also known as MBS, on Wednesday that economic and military cooperation between the two countries is in jeopardy unless the kingdom helped stabilize oil prices by cutting crude output.

"If the Kingdom fails to act fairly to reverse this manufactured energy crisis, we would encourage any reciprocal responses that the U.S. government deems appropriate," said a letter to the crown prince signed by nearly 50 Republican U.S. Representatives.

It was the latest pressure by Republican lawmakers on Saudi Arabia over its race for oil market share with Russia.

Crude oil prices have plummeted with slumping demand during the coronavirus outbreak and on excess supply. Crashing prices threaten highly leveraged U.S. oil companies with bankruptcies and layoffs. Many of the lawmakers were from oil-producing states, including Louisiana's Steve Scalise, the No. 2 House Republican, who spearheaded the letter.

A supply deal between The Organization of the Petroleum Exporting Countries (OPEC), Russia and other producers that had propped up oil prices for three years collapsed in March, while the coronavirus hammered demand. On Thursday, Saudi Arabia and Russia will participate in an OPEC+ meeting. U.S. President Donald Trump has said he brokered an output cut of 10-15 million barrels per day but Moscow and Riyadh have yet to publicly indicate any agreement on the level or how to distribute reductions among OPEC+, which includes the OPEC countries, Russia and other producers.

"Failure to address this energy crisis will jeopardize the joint efforts between our nations to collaborate economically and militarily," the letter said. "The U.S. military presence in the Middle East region has maintained the stability that provides for the economic prosperity and ensures the security of our two nations."

A group of Republican senators had claimed on March 27 that Saudi Arabia and Russia have embarked upon economic warfare against the U.S., urging the kingdom in a letter to leave the OPEC and instead become a "free market energy powerhouse."

"The Organization of Petroleum-Exporting Countries is a relic of a cartelized past, one that burdens the Kingdom with free-riders and forces it to shoulder the lion’s share of every production decision," said the letter, signed by Republican Senators Lisa Murkowski, Kevin Cramer, Dan Sullivan, James Inhofe, John Hoeven and Cindy Hyde-Smith.

"Instead of investing in Russian energy projects – which may only deepen Russia’s ties to China and provide it with leverage over American allies in Europe – the Kingdom should partner with the U.S. on strategic energy infrastructure projects across the Indo-Pacific region and in the Americas," it added.

Riyadh and Moscow blamed each other for the failure and launched a battle for market share, sending oil prices to their lowest in two decades and straining the budgets of oil-producing nations while hurting higher-cost producers in the U.S.

Russia and Saudi Arabia have long been frustrated that curbs by the OPEC and others have left a gap that has been filled by shale oil firms in the U.S., which became the world's biggest producer.

Producers also differ over the level from which they should make any output cuts. Riyadh, with by far the world's biggest reserve of extra capacity, has insisted it will no longer carry what it considers an unfair burden of cuts.

Russia President Vladimir Putin has said the base should be production levels in the first quarter.