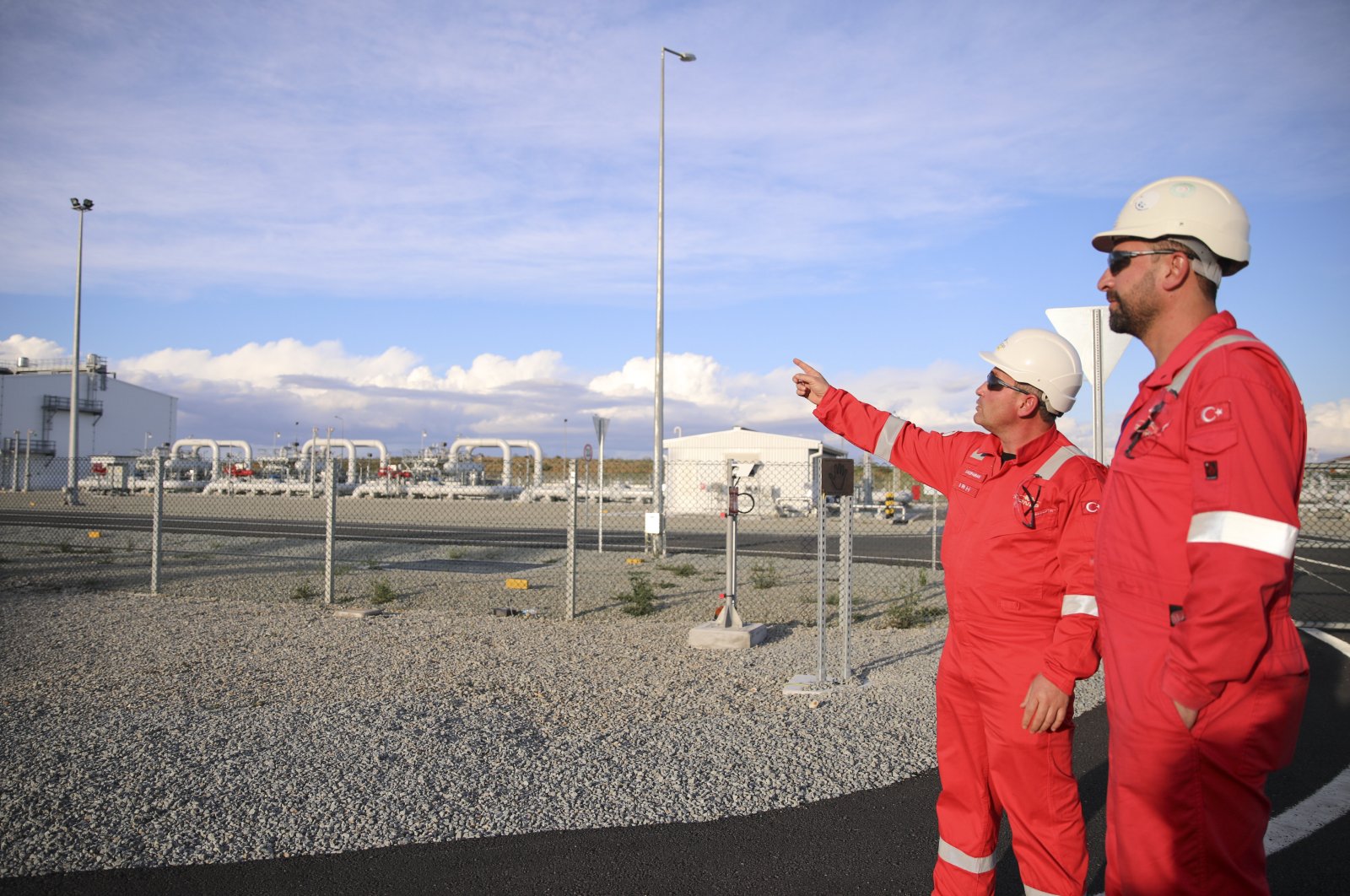 Workers inspect the TANAP MS4 reading station in the İpsala district of the northwestern Turkish province of Edirne, near the border with Greece, Dec. 2, 2019. (AA Photo)
by DAILY SABAH WITH AA
May 01, 2020 11:53 am

The Trans-Anatolian Natural Gas Pipeline Project (TANAP) is a regional peace project, President Recep Tayyip Erdoğan has said, calling it a concrete example of the long-lasting trust and friendship between Turkey, Azerbaijan and Georgia.

Erdoğan's remarks came in "TANAP: Regional Development and Peace Project" article he penned for the latest issue of "The Diplomat" operating in Georgia, published in collaboration with The New York Times.

"TANAP is a concrete example of the long-lasting trust and friendship between Turkey, Azerbaijan and Georgia. It constitutes the main leg of the Southern Gas Corridor, which aims to take the Hazar region's natural gas to Europe through Turkey and Georgia. It is the most important piece of a 3,500-kilometer-long corridor."

TANAP stretches from the Turkish-Georgian border to the Turkish-Greek border to deliver 6 billion cubic meters of Azerbaijani gas to Turkey and 10 billion to Europe per year. The pipeline passes through 20 provinces and 67 districts of Turkey.

One of the biggest energy projects in the region, TANAP was officially launched in June 2018. On Nov. 30 last year, Erdoğan and his Azerbaijan counterpart İlham Aliyev inaugurated the project's European link in the northwestern Turkish province of Edirne, near the border with Greece.

Erdoğan said Turkey's process of change over the last 18 years created a suitable environment for channeling energy resources from this region to Turkey and Europe.

"Thanks to our cooperation with Azerbaijan and Georgia, the Baku-Tbilisi-Ceyhan crude oil pipeline was launched and commissioned in 2006. Later, the Baku-Tbilisi-Erzurum Natural Gas Pipeline was put into operation in 2007 to transport the natural gas produced at Azerbaijan's Shah Deniz field to Georgia and Turkey," the president noted.

Following the final investment decision made by the Shah Deniz Field partners for phase two of the project in December 2013, the president said work on the extension of the Baku-Tbilisi-Erzurum Natural Gas Pipeline, passing through Azerbaijan and Georgia to Turkey, and on the construction of TANAP was accelerated.

"TANAP was built in a short time span of three years, after the laying of its foundation on March 17, 2015, and it began carrying gas to Turkey on June 12, 2018. In addition, the European connection of TANAP was inaugurated with a ceremony held on Nov. 30, 2019," Erdoğan said in the article.

The president said he supported each step of the natural gas provision chain, stretching from Georgia and Turkey to Europe.

"Turkey has a key position in the value chain of approximately $45 billion, consisting of the Shah Deniz Phase 2 Project, the Baku-Tbilisi-Erzurum Natural Gas Pipeline Extension Project, TANAP and Trans-Adriatic Natural Gas Pipeline (TAP). Turkish pipe manufacturers and construction contractors have played an important role in TANAP, which was launched with an investment of approximately $6.5 billion. TANAP, with an annual capacity of 16 billion cubic meters of natural gas transmission, starting from the Georgia-Turkey border and passing through 20 provinces, 67 districts and 600 villages, will make a significant contribution to the energy supply security of Turkey and Europe."

He said Turkey is the world's 18th largest natural gas market and adjacent to Europe, the second-largest market in this context.

As a result, TANAP has significant potential "in terms of delivery to Turkey and Europe of the natural gas to be produced at other natural gas fields in Azerbaijan, other Caspian resources as well as other countries of the region."

Beyond its contributions to energy supply security, the president said: "TANAP also symbolizes the contributions of energy to regional peace – which has become a serious global issue today, due to increasing populations and growing economies. Today, the world's energy map is changing. New actors and new cooperation models are emerging."

He said in the last two centuries, great wars have been fought for control of energy resources.

"They have had a major impact particularly on the geography where Turkey and Georgia are located. Despite not being rich in hydrocarbon resources, both countries have felt the impact. From this point of view, TANAP is the best response given in peace and cooperation to the environment of conflict provoked by some actors over energy resources. Turkey and Georgia have used their geographical location – that is the junction point of energy-producing and consuming countries – to promote an environment of peace and cooperation rather than encourage conflicts. Both countries have set an example for the entire world by making the necessary efforts to put energy resources at the disposal of humanity at a time when regional tensions and instability are growing every day.

"TANAP is the Silk Road of energy. Besides its strong and sustainable economy, peace-oriented foreign policy and stable administration approach, Turkey also neighbors rich natural gas and oil reserves due to its geographic location. So far, Turkey has acted as a secure bridge between the source countries and the consumer markets, and it will continue to do so in the future," Erdoğan concluded.