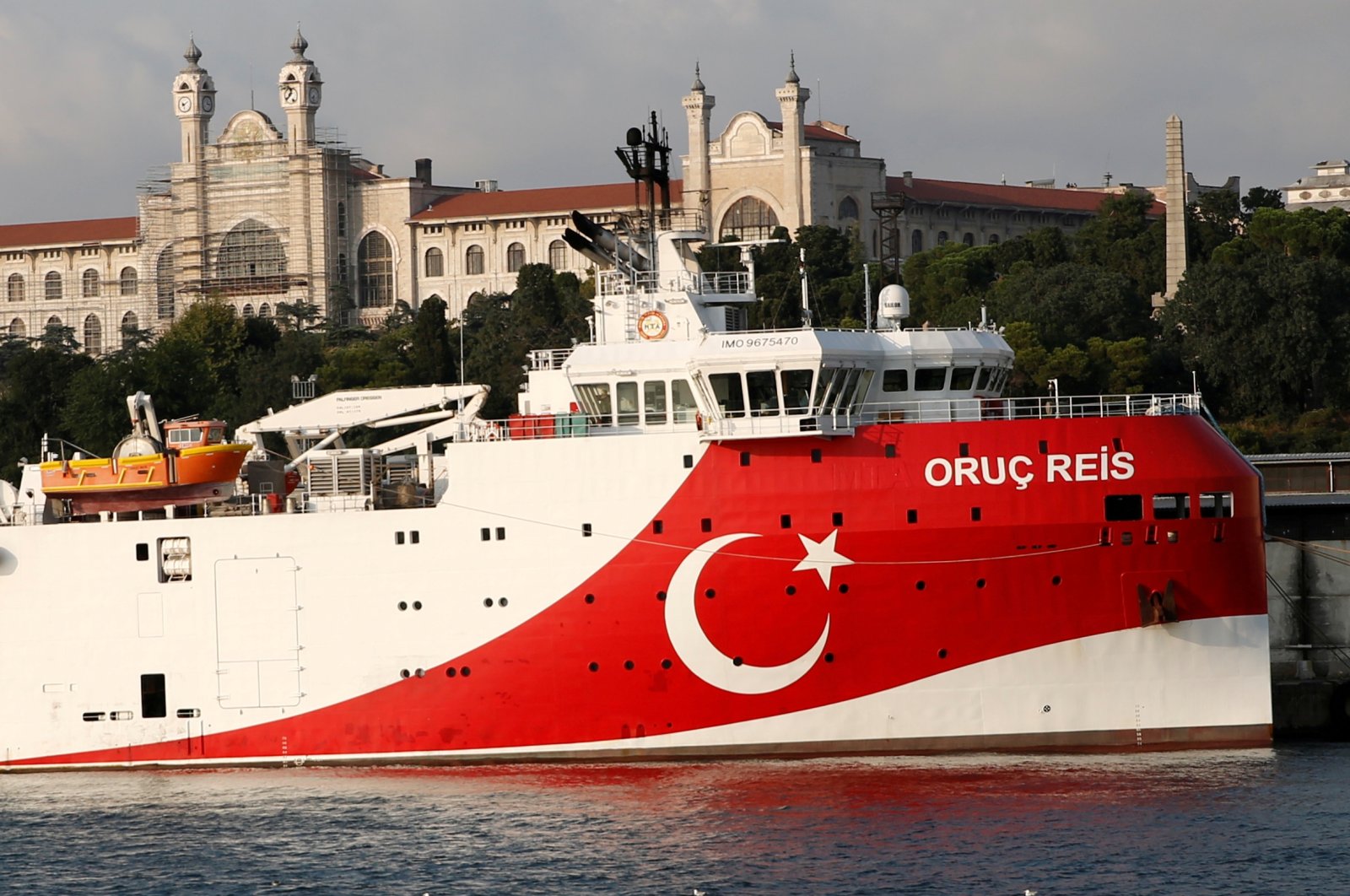 As an energy imports-dependent country, Turkey has been focusing on strengthening its energy policy by diversifying its sources. To benefit from cheaper liquefied natural gas (LNG) prices, the country has accelerated investments in both its infrastructure and storage capacity, while accelerating the country's independent exploration of its own resources by sending its drillships and seismic exploration vessels on missions into the Eastern Mediterranean and the Black Sea.

The country imported 45.3 billion cubic meters (bcm) of natural gas last year, at a cost of approximately $12 billion (TL 88.39 billion). The total bill for gas imports heavily relies on oil prices. Meanwhile, in the January-June period this year, total natural gas imports decreased by 3.5% compared with the same period in 2019, totaling around 22.4 bcm.

The bulk of natural gas was imported from Azerbaijan in the first half of this year, at a total of 5.4 bcm – up 23.4% compared with last year.

The increase in the amount of gas coming from the Caspian country is mostly due to the Trans Anatolian Natural Gas Pipeline (TANAP), a major initiative that expected to transform Turkey into an energy hub.

The TANAP, a significant symbol of successful cooperation between Ankara and Baku, was officially launched in a ceremony held on June 12, 2018, presided by President Recep Tayyip Erdogan and his Azerbaijani counterpart Ilham Aliyev.

With investments of over $7 billion, the TANAP is the largest section of the Southern Gas Corridor project. The pipeline stretches from the Turkish-Georgian border to the Turkish-Greek border to supply natural gas to both Turkey and European countries.

With this achieved during the first half of the year, the amount of natural gas imported from Russia decreased. This marks a major shift, as Russia previously had always taken the lion’s share in gas exports to Turkey.

Russian gas consumption dropped by 41.5% to 4.6 bcm. In the same period of last year, 7.9 bcm of gas was imported from Russia, carrying the country once again to the top place.

The amount of natural gas purchased from Iran also decreased by 46% at 2.2 bcm. Over April, May and June, Turkey did not import gas from that country.

Turkey imported 2.9 bcm of LNG from Algeria over the January-June period as part of a long-term contract. Meanwhile, Qatar became the country from which Turkey sourced its highest amount of spot LNG with an increase of 124% year-on-year. Moreover, Turkey's spot LNG imports from the United States has also jumped by 144.3% compared with the same period last year and reached 2.1 bcm. During this period, the amount of LNG imports from Nigeria, another country that also holds a long-term gas contract with Turkey, decreased by 17.3% to 1.1 bcm.

By diversifying its supply channel, Ankara has also imported 633 million cubic meters (mcm) of LNG from Trinidad and Tobago in the period in question, and countries like Equatorial Guinea, Cameroon, Egypt, Norway and Spain have also taken their places among lesser LNG suppliers.

In the first half of this year, 203 mcm of gas was exported to Greece – down from 378 mcm in the same period last year.

Although during the January-June period Turkey's natural gas consumption decreased by 3.8% compared with the same period of 2019, the country has started to reap the benefits of investments made in LNG storage capacity.

As one of the steps taken as part of a broader approach to the country’s energy policies, the private sector has also begun prioritizing LNG investments.

Turkey has a floating storage and regasification unit (FSRU) unit located in the Aliağa district of the Aegean province of Izmir that is run by the Kolin-Kalyon Enerji Çelikler Joint Venture Group and operated by Etki Liman Işletmeleri. The FSRU has replaced Turkey’s first FSRU that entered service in 2016 as a larger-capacity facility in 2019. With a storage capacity of 170,000 cubic meters of gas, the FSRU compresses 28 mcm of natural gas to the system daily.

There is also an FSRU terminal in the Dörtyol district of the southern province of Hatay, the launching ceremony of which was held on Feb. 7, 2018, with the participation of then-Energy Minister Berat Albayrak. This is operated by Turkey's Petroleum Pipeline Company (BOTAŞ). The terminal was dubbed crucial in terms of Turkey’s energy supply security as being the world's largest storage capacity FSRU with 263,000 cubic meters of LNG storage capacity.

Currently, Turkey operates four LNG terminals, two of which are the FSRUs and the remaining two land facilities. Work is continuing for a new FSRU in northwestern Turkey’s Gulf of Saros. Media reports also said in July that the ENKA Group has most recently applied to the Energy Market Regulatory Authority (EPDK) to establish an LNG facility in Izmir.

Against the backdrop of regional tensions, Turkey has reiterated several times that it will continue to carry out drilling and exploration activities in areas that fall under its continental shelf and the borders of its exclusive economic zone (EEZ) in the Eastern Mediterranean that were declared to the United Nations, and in the Black Sea, which came to the fore recently with the country’s biggest-ever natural gas discovery.

All these recent developments, meanwhile, have also turned millions of eyes toward Turkey’s drilling ships and seismic exploration vessels, which have given the country an upper hand in carrying out these activities independently.

One of those vessels, the Yavuz drillship, was purchased by Turkey's main oil exploration company Turkish Petroleum (TPAO) in 2018 to increase maritime exploration and drilling activities as part of Turkey's ongoing National Energy and Mining Policy. The vessel arrived at the Marmara Sea on Feb. 22, 2019, to undergo renovation and maintenance works and launched operations in the Eastern Mediterranean on June 20, 2019.

Turkey's first drilling ship, the Fatih, entered the country's inventory in 2017. After the ship was equipped with a pressure-controlled system, it started drilling in the Alanya-1 deep-water well on Oct. 29, 2018. The ship then moved to the Finike-1 area of the Eastern Mediterranean. Built in South Korea in 2011, the ship is 229 meters long and capable of drilling at a depth of 12,120 meters in the sea.

Since July 20, 2020, the ship has been working in the Tuna-1 research well, approximately 170 kilometers (105.6 miles) off the coast of Zonguldak province in the western Black Sea region. As a result of those works, a natural gas reserve of 320 bcm was discovered at a depth of 2,100 meters. A total of 210 personnel man the ship.

The Kanuni, Turkey's third drillship, was purchased in 2020 by TPAO. The ship's equipment can reach a depth of 11,400 meters and drill 3,000 meters below the ocean floor. The maintenance and development process of the Kanuni drillship started in August 2020 at the NATO port in Incekum of the Silifke district of Mersin province in southern Turkey. It is expected the vessel will be commissioned for the activities in the Eastern Mediterranean by the end of the year.

One of two of Turkey’s seismic vessels, the Barbaros Hayrettin Paşa, was purchased in 2013 and started exploration activities in the Black Sea, continuing work in the Eastern Mediterranean in 2017. It will continue to search for oil and natural gas in the waters between Gazimağusa (Famagusta) and Lebanon, which the Turkish Republic of Northern Cyprus (TRNC) has licensed to TPAO until Sept. 18.

Meanwhile, the MTA Oruç Reis is a seismic research vessel with 90% local design, craftsmanship and integration. The construction of the ship, owned by the General Directorate of Mineral Research and Exploration (MTA), started in Istanbul in 2012 and was completed in 2015. The ship was tasked with searching for oil and hydrocarbons in the Mediterranean Sea in April 2017.

Following the escalating tension with Greece, Oruç Reis's activities were delayed for a while as a sign of goodwill; however, it was announced in a navigational telex (Navtex), an official maritime warning note, in the first week of August that the vessel was set to resume activities. Turkey issued a new Navtex to extend the Oruç Reis seismic research vessel's activities in the Eastern Mediterranean to Aug. 27, a statement by the Turkish Naval Forces Command (DzKK) Office for Navigation, Hydrography and Oceanography (OHNO) said Sunday.