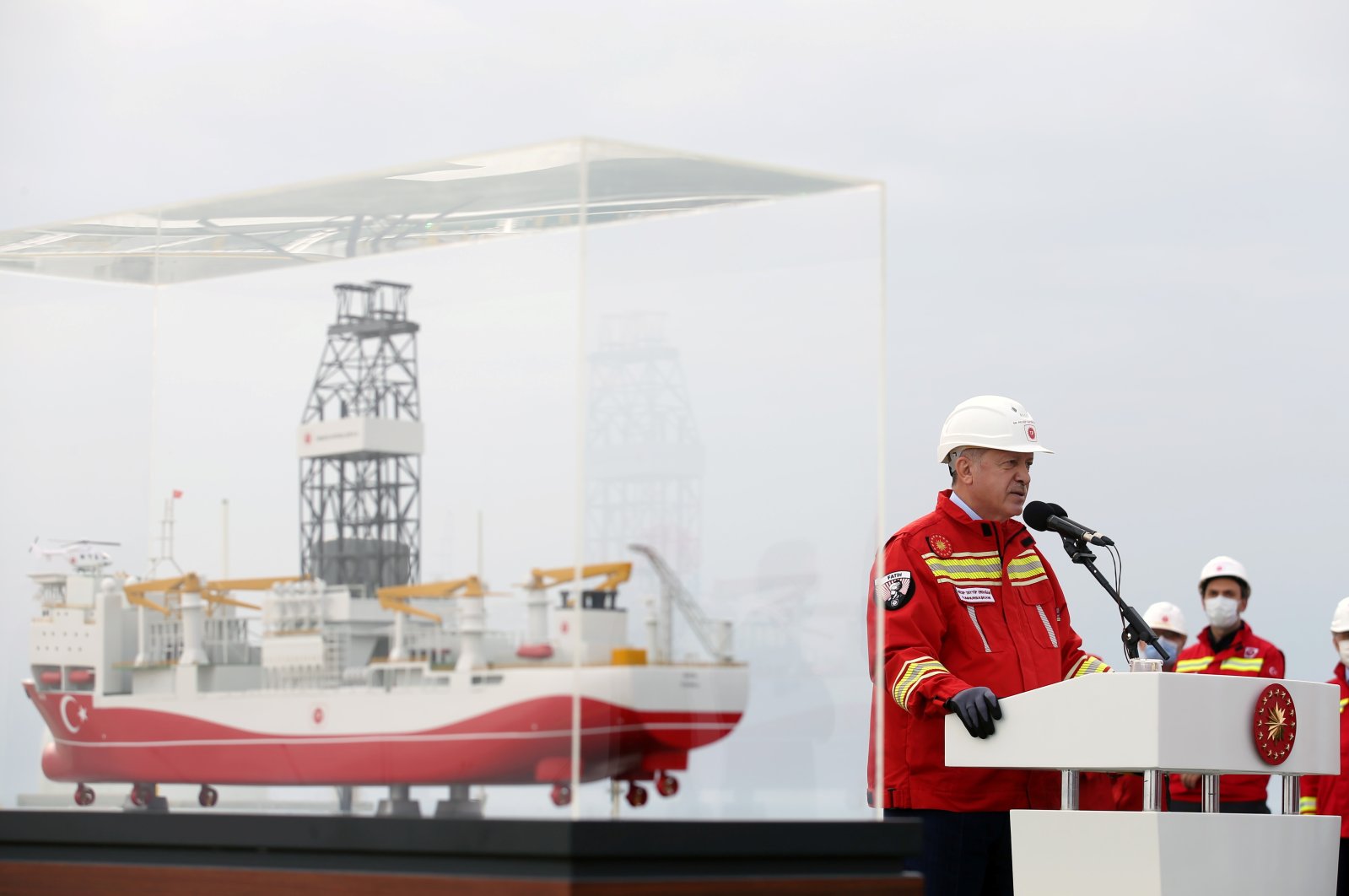 President Recep Tayyip Erdoğan speaks on the deck of the drilling vessel Fatih off the Black Sea city of Zonguldak, Turkey, Oct. 17, 2020. (Photo by the Presidential Press Office via Reuters )
by DAILY SABAH WITH AA Oct 18, 2020 12:39 pm
Edited By Ayşe Betül Bal
RECOMMENDED

Turkey's giant natural gas discovery in the Black Sea has been revised to 405 billion cubic meters (bcm) and with the new 85 bcm of reserves in the Sakarya gas field taken into account, could meet 100% of the natural gas consumption of 14 million Turkish households for about 25 years.

President Recep Tayyip Erdoğan, after announcing Turkey's biggest gas discovery in its history with 320 bcm in the Black Sea, relayed on Saturday that with the addition of the supplies which the Fatih drillship reached in the new Sakarya gas field, accumulative field reserves now total 405 bcm.

This amount is almost 25 times higher than the country's overall gas production on record which stood at 16.6 bcm at the end of 2019 and based on current price trends is worth between $85 billion (TL 674 billion) and $90 billion.

Taking into consideration Turkey's annual gas consumption of around 45 bcm, the total reserves are estimated to meet the country's total gas needs for around eight years. However, technically it is most unlikely that this amount could be produced on an annual basis, as gas field production typically increases gradually over its years of production to eventually reach peak output.

Turkey plans to start natural gas production of 5-10 bcm annually starting from 2023. The field is expected to reach plateau production of around 15 bcm in 2026.

Yaşar Arslan, the head of the Natural Gas Distribution Companies Association of Turkey, told Anadolu Agency (AA) Sunday that Turkey would be able to meet 100% of its household gas needs for almost 25 years through its own resources.

“A Turkish household consumes 1,000 bcm annually, and currently 14 million households are using natural gas in all cities of the country," Arslan said.

Turkey plans to build a 200-kilometer-long pipeline from the offshore field to the coast to transfer gas to the national gas grid.

With reference to the seismic studies conducted in the field, Arslan said the results found that the reserves are both rich and of good quality, and he expects their quantity to increase over time with further drilling activities.

Palzor Shenga, oil and gas analyst at Norway-based research center Rystad Energy, said the discovery of such a magnitude could once again help attract exploration and production companies to invest in the Turkish Black Sea and explore the hydrocarbon potential.

He explained the difficulties in the past with drilling in the Black Sea, which led to Romania’s failure in 2012 to start production from its discovery of approximately 42-84 bcm.

"The Black Sea has always been considered as one of the most prospective (hydrocarbon) areas. However, the potential of the basin has not been established primarily due to the failures of the deep-water wells drilled in the past because there is variability in reservoir characteristics as we move across the basin. This led to the relinquishments of licenses by the majors (oil and gas exploration companies) in 2012."

Turkey's natural gas import bill of $12 billion annually is estimated to drop by around 30%, equivalent to $3 billion to $4 billion, with annual production from the field. And with this decline in import costs, savings are expected to be passed on and reflected in reduced household bills.

The total bill for gas imports heavily relies on oil prices, and Turkey's long-term, oil-indexed gas contracts with Russia, Iran and Azerbaijan directly contribute to the country's foreign trade deficit. Higher gas import prices drive up the country's deficit since it is dependent on natural gas imports for its consumption.

The country is striving to intensify domestic gas production, as the country is 99% dependent on imports both via pipelines and liquefied natural gas (LNG). The majority of these imports come from Russia while Azerbaijan and Iran also have a significant share of total gas imports.

Due to more investment in the country’s LNG infrastructure and storage facilities, Turkey can now have a greater share of LNG in its mix with LNG imports from major destinations including the United States, Norway, Qatar and Algeria.

Shenga said Rystad Energy forecasts that Turkey's natural gas demand will rebound to 59 bcm by 2030 and 71 bcm by 2040, having declined somewhat in the recent years when renewables replaced gas.

"Therefore, if the Turks are able to recover the declared volumes, it will change the dynamics of its energy mix helping its way toward the ambition of becoming self-sufficient," he said.

Shenga explained that the discovery is still in its early stages, and the find has yet to be appraised and flow tested to establish the deliverability of the petroleum system and the extent of the reservoir. But in the coming years, he expects an aggressive drilling schedule.

He disclosed that the timing of the discovery could not be better as it came before a quarter of Turkey’s long-term gas contracts are due to expire next year, providing Turkish importers greater bargaining power in negotiating imports amid the aggressive production schedule of the new gas find.

The president, during his speech Saturday, said Turkey will continue to search for hydrocarbon resources in the Black Sea and the Mediterranean Sea.

Meanwhile, the country’s third drillship Kanuni on Sunday passed the Dardanelles Strait en route to the Marmara Sea and is expected to anchor at the Istanbul coast within the next 22 hours.

The vessel is sailing to reach the Black Sea where it will be conducting research and drilling activities alongside the Fatih drillship that made the country’s largest-ever gas discovery.

Kanuni, which was included in the fleet this year, set sail from the Port of Taşucu in southern Turkey’s Mersin province and will anchor at the historical Haydarpaşa Port on Istanbul’s Asian side. The tower dismantling process will be carried out there to allow the vessel to pass under all three bridges spanning the Bosporus. It is expected to reach the Black Sea in November.