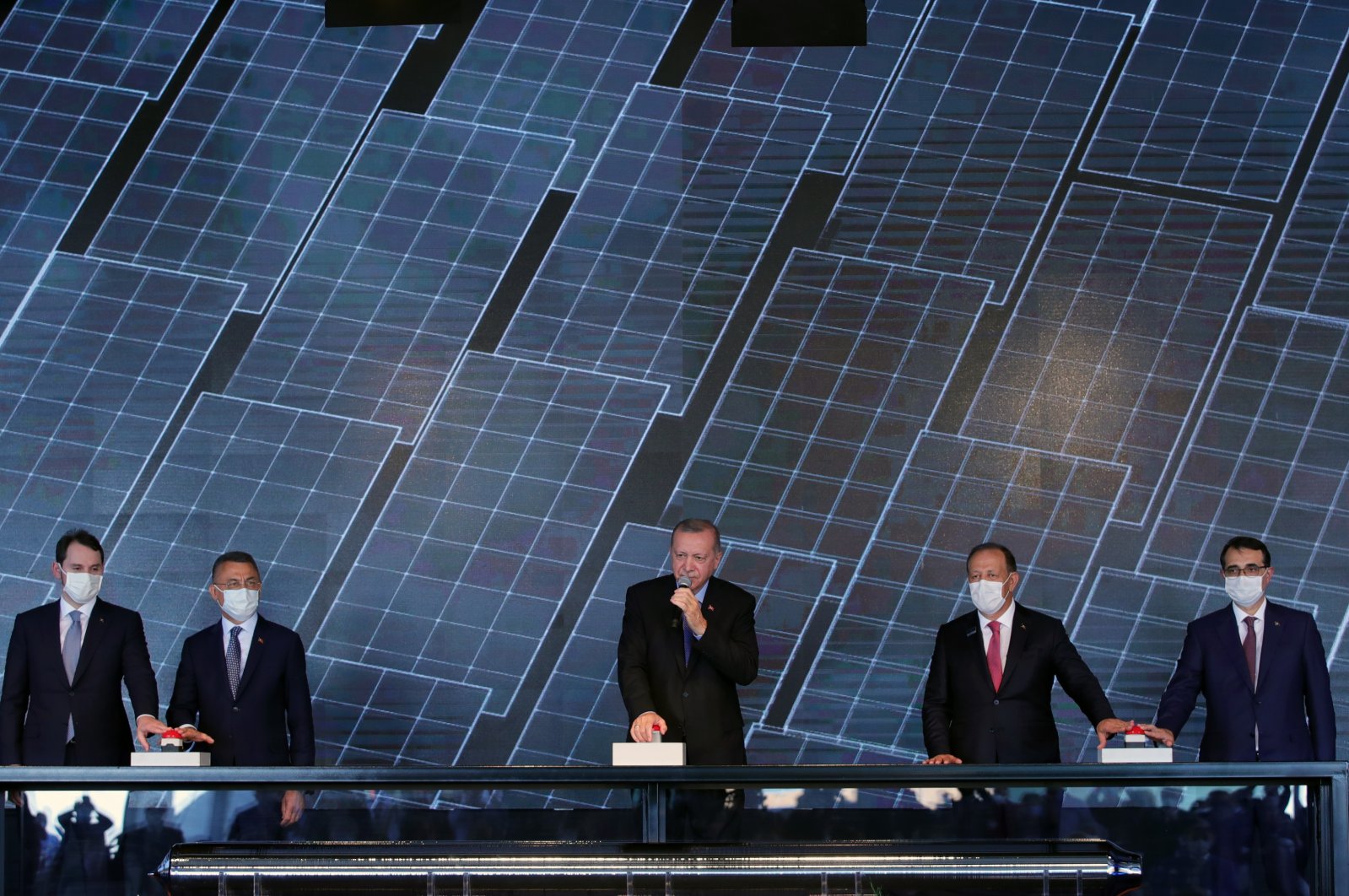 Turkey on Wednesday witnessed the opening of the country's first and Europe and the Middle East’s only integrated solar panel manufacturing facility, which promises to further develop the country's renewable energy resources.

“I believe the facility will take our country to leadership in the solar panel industry,” he stressed.

The factory will manufacture solar panels with a capacity of 500 megawatts (MW) per year, the president noted. “We are going to prevent millions of dollars’ worth of imports of solar panels and components," Erdoğan said.

“Turkey has come to a position in renewable energy area where it can manufacture technology,” Treasury and Finance Minister Berat Albayrak said in his speech at the ceremony, expressing belief that the country will move forward in other areas of technology as well.

“Our factory, which came to life with an investment of $400 million, will be the world's only fully integrated solar panel plant operating under one roof," he said.

Turkey has managed to become ninth in the world and third in Europe among countries that have increased their installed solar power capacity since it started bringing solar plants into action in 2014, Dönmez said.

With the commissioning of the plant, the share of solar energy in electricity production in Turkey will increase by 25% and the annual emission of 2 million tons of carbon dioxide will be prevented, the minister added.

Also speaking at the ceremony, Kalyon Holding Chairman of the Board Cemal Kalyoncu stressed the facility was a very important investment in the field of national energy.

Kalyoncu also pointed out that the factory is the first and only fully integrated factory in the world that combines all stages of solar panel production, including research and development (R&D), under a single roof.

Kalyon's facility will produce components for Turkey’s biggest solar power plant, which will be established in the Karapınar district of the central Anatolian province of Konya as part of the first solar Renewable Energy Resource Zone (YEKA) tender with a capacity of 1,000 megawatts.

Kalyon Holding, together with a South Korean Hanwha Q-Cells consortium, won the tender for Turkey's biggest solar power plant project – the Karapınar Renewable Energy Resources Zone Project – in March 2017 at a cost of $0.0699 per kilowatt-hour. However, Hanwha will not continue with the project, and China Electronics Technology Group Corporation (CETC) has stepped in to construct the facility and to provide an additional two years of technical assistance after the turnkey contract expires.

CETC is one of the biggest companies in China and is known for building China's first satellite, airborne radar and guided missiles, and for developing and manufacturing electronics.

Under the tender rules, solar components are to be produced locally, and the tender also stipulates that local engineers should constitute 80% of the project's workforce.

The construction of the module cell factory to produce four units – ingot, wafer, module and cell – was inaugurated at a groundbreaking ceremony in December 2017.

The factory will have an R&D center for the development of solar power technologies. The center will employ about 100 engineers.

The components produced at the facility will be used for Karapınar YEKA in the first three years of operations, after which the Turkish company might explore supplying other local projects and international markets.

“The factory will add to the dynamism of the renewable energy industry,” Dönmez said in his speech.

“One by one, we are taking steps to end our country’s external dependency,” Albayrak said. “We are starting to produce our national energy with our clean and independent energy technology,” the minister said on Twitter prior to the opening.

The country plans to boost its wind and solar capacity by 10,000 MW each year over the coming decade through YEKA. Dönmez announced plans to hold YEKA tenders for solar energy in a new form, known as “mini YEKA,” which are due to be held in October.

Monocrystalline solar panels are currently the most widely used worldwide and are even expected to become more widespread in the future.

Regarding the coronavirus situation, Erdoğan said the outbreak in Turkey "is still under control" despite a slight rise in cases over recent days.

As of Tuesday, Turkey reported 251,805 COVID-19 infections, while the total recovery tally stood at 232,913, according to the Health Ministry data. The country's death toll stood at 6,016.

"We see that air traffic has regained the momentum it lost (due to the pandemic)," he said, adding that the arrival of a large number of Russian, Ukrainian, and German tourists has lifted Turkey's tourism sector.

He said the production industry's strong performance in June put Turkey among the top five fastest recovering economies in the world.

There was a 17.6% increase in Turkey's monthly production in June, the president said.

Erdoğan stressed that Turkey's economy has regained its pre-epidemic momentum despite externally-caused challenges, vowing all possible efforts to further improve the situation.