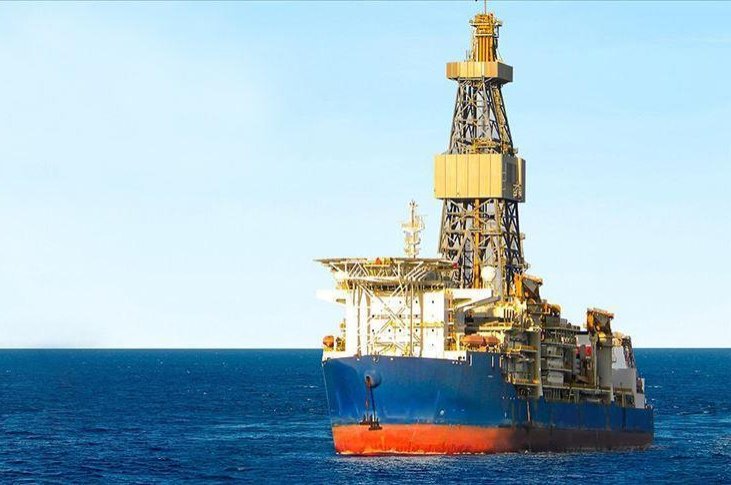 Energy and Natural Resources Minister Fatih Dönmez recently said the new ship would be likely to operate either in the Eastern Mediterranean or the Black Sea. (AA Photo)
by daily sabah Mar 15, 2020 2:15 pm
RECOMMENDED

Turkey’s third oil and natural gas exploration and drilling vessel, the Kanuni, arrived in Turkey Sunday having journeyed all the way from a port in the U.K., Energy and Natural Resources Minister Fatih Dönmez announced.
Dönmez said the personnel onboard would be put under quarantine inside the ship as a preventive measure against the coronavirus. Officials will begin the maintenance and development process for the ship after the end of the quarantine period.
Turkey is reported to have bought the drillship for nearly $40 million. The ship, formerly known as the Sertao, is valued much higher than its asking price, but Port Talbot officials were reportedly in a hurry to sell.
The drillship, which has been docked idle at the Welsh port town for nearly two years, has an estimated market value of $120 million. The drillship was produced by Samsung in South Korea and used by Brazil's Petrobras between 2012 and 2015.
The Marshall Island-flagged drillship has a length of 227 meters, a width of 42 meters and a draft of 12 meters. It can reach as much as 11,400 meters below sea level and drill to a depth of 3,000 meters below the seabed.
In February, Dönmez said the new ship would be likely to operate either in the Eastern Mediterranean or the Black Sea, where drilling work has been long suspended.

The title of Kanuni, which means the "lawgiver" in Turkish, belongs to Suleiman I. Known as Suleiman the Magnificent, Suleiman I was one of the greatest sultans that ever ruled the Ottoman Empire. He was the 10th and longest-reigning sultan of the Ottoman Empire, ruling from 1520 until his death in 1566.