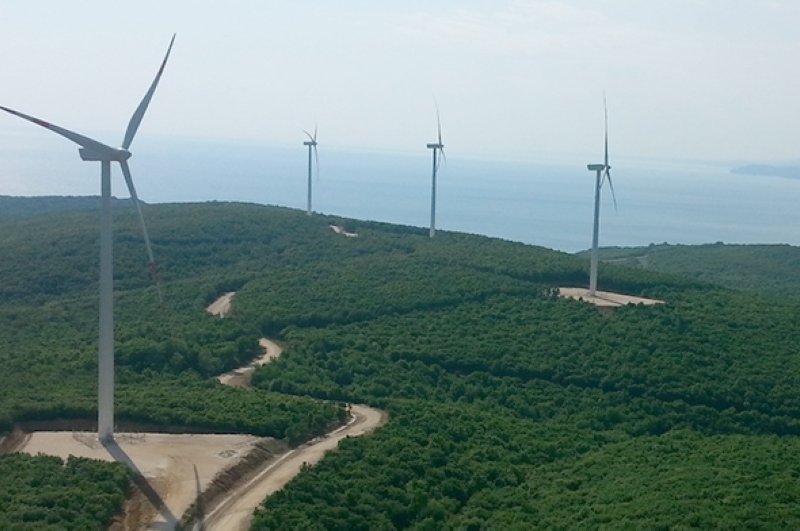 A view of Borusan Enerji's 28 MW wind farm located on the west coast of the Black Sea in the province of Kırklareli. (Photo courtesy of Borusan Enerji)
by Elif Binici Erşen Feb 26, 2020 3:43 pm

A strong supporter of Turkish renewable energy projects, the European Bank for Reconstruction and Development has reiterated its commitment to the upcoming projects in the sector with particular emphasis on the changing trends in the investment schemes

The European Bank for Reconstruction and Development (EBRD) – a traditional supporter of projects in Turkey and the region – has reiterated its commitment to continue financing Turkish renewable projects.

“EBRD will continue to support Turkish renewable projects. We recently signed a loan agreement with Borusan for the capacity extension at the Kıyıköy wind farm located in northwestern Turkey,” said EBRD director of Energy Eurasia for Sustainable Infrastructure Group, Aida Sitdikova, in an exclusive interview with Daily Sabah, on the sidelines of the Atlantic Council – EBRD Renewable Energy Outlook conference last week in Istanbul.

In January, Turkey’s Borusan and EBRD inked a $37 million financing deal for the development, construction and operation of an additional capacity of 72 megawatts (MW) to the currently operating 28 MW wind farm located on the west coast of the Black Sea province Kırklareli, Sitdikova said.

The Industrial and Commercial Bank of China (ICBC) Turkey also provided the same amount of loans for the project.

The extension of the Kıyıköy wind power plant project highlights Turkey’s commitment to add another 10,000 MW to its existing 7,600 MW wind power capacity in the next decade. The Kıyıköy extension project is estimated to help save annually around 99,700 tons of carbon emissions, according to the EBRD.

“Supporting Turkey’s sustainability goals is among the EBRD’s priorities in the country. To date, the bank has financed, both directly and through local banks, nearly 3,000 MW of Turkey’s installed capacity, Sitdikova said.

In 2019, the EBRD along with the Asian Infrastructure and Investment Bank (AIIB) and the Black Sea Trade and Development (BSTD) provided $350 million in loans for Turkey’s largest geothermal power plant in Efeler, located in the Aegean province of Aydın, to add another 100 MW capacity to the plant, which had been operating at a capacity of 162.3 MW. The bank also acquired stakes worth $100 million in İçtaş Sürdürülebilir Enerji Yatırımları, the renewable arm of the IC Energy Holding. Moreover, the EBRD has also supported Turkish renewable investor Akfen’s projects to expand its clean energy portfolio with wind and solar projects.

The European financier is a major investor in the Turkish project which will contribute to the country’s development. Since 2009 when the EBRD first entered the Turkish market, it has invested more than 12 billion euros ($12.98 billion) in miscellaneous projects, half of them promoting the sustainable use of energy and resources. According to the EBRD’s data, its 6.7 billion euro portfolio in Turkey is the bank’s largest among the 38 economies where it invests.

Talking about the possible scenarios for the post-2020 renewable energy projects investment scheme, Sitdikova said the Turkish market does not require subsidies any more given the prices.

“It (the post-2020 investment mechanism) might still be a feed-in-tariff scheme. But with the prices at the current levels in countries such as Uzbekistan or Kazakhstan, Turkey might want to take another look at the feed-in-tariff levels. Because, for instance, solar power plants projects in Turkey do not need the subsidies that have been provided so far,” Sitdikova remarked.

The EBRD Eurasia energy director noted that Uzbekistan awarded in October 2019 the United Arab Emirates’ (UAE) Masdar Clean Energy a 100 MW solar power plant project, at an auction where the price was set at $0.0267 (2.67 cents) per kilowatt-hour (kWh). Italian oil and gas producer ENI won a tender bid to build a 50 MW solar power project in Kazakhstan with an auction price set at $0.032 kWh (3.2 cents) in December 2019.

When prices for solar and wind reach grid parity with conventional generation in light of the dramatic decline in the cost of renewables globally, Sitdikova explained, governments don't have to provide subsidies.

In an emphasis on Turkey’s “impressive depth and variety” in the renewables sector, she maintained that the country is well-positioned to reap the benefits of prices well below the current feed-in-tariff levels, similar to the newcomers in Central Asia and the Caucasus, if it fully enforces the competitive market forces and enables the regulatory environment.

“For countries to realize the low prices, driven by the ramped-up capacity and competition by manufacturers and suppliers, competitive procurement of renewable energy needs to be introduced,” Sitdikova emphasized and drew attention to global transition toward auction models from feed-in-tariffs with their implicit subsidies.

Turkish authorities have previously announced that the post-2020 investment scheme will be based on feed-in-tariffs but prices for wind and solar power projects will be different, without providing much detail so far.

The international trend of the last couple of years has proved that the auction model will be maintained as the pivotal financing and investment mechanism for cost-effective renewable projects as private companies have been fast-learners. The latest renewable energy report of the International Energy Agency (IEA), released in December, has argued that government support for the utility-scale renewable technologies are transitioning toward competitive auctions for which long-term purchasing agreements are devised. In its five-year forecast, IEA predicts that by 2024 two-thirds of utility renewables will be auction-based competition.

“Government subsidies might have been useful in kick-starting the renewable energy sector and catalyzing investments, but today renewables are becoming fully cost-competitive with fossil-fuel generators, even without factoring the cost of carbon,” Sitdikova further explained.

According to the data compiled from the YEKDEM reports of EPİAŞ, 777 power plants with a total installed power capacity of 20,921 MW received subsidies allocated as part of the renewable support mechanism. These power plants received more than TL 38.04 billion and generated 76.67 million megawatt-hours (MWh) of electricity, EPİAŞ data showed. In January this year, 817 renewable power plants that run on an installed capacity at 21,049 MW benefitted from YEKDEM subsidies worth TL 2.8 billion.

Turkish renewable energy investors and all professionals that have been closely watching the market have been on alert for the announcement of the new investment support scheme, as the existing YEKDEM, thanks to which Turkey has remarkably exploited its renewable potential and exponentially raised its installed capacity, will expire by the end of this year.

Launched in 2011 to use the country's vast clean sources efficiently and support its development, YEKDEM offers a feed-in tariff of $0.073 kWh for wind and hydropower projects, $0.105 kWh for geothermal facilities and $0.133 kWh for solar energy and biomass geothermal plants.

While Turkey had only 15,500 MW installed renewable capacity in 2009, which mostly relied on hydropower plants and included no solar, the country’s aggregate installed renewable power capacity currently hovers around 45,000 MW – corresponding to 49% of the total installed power at 91,267 MW.