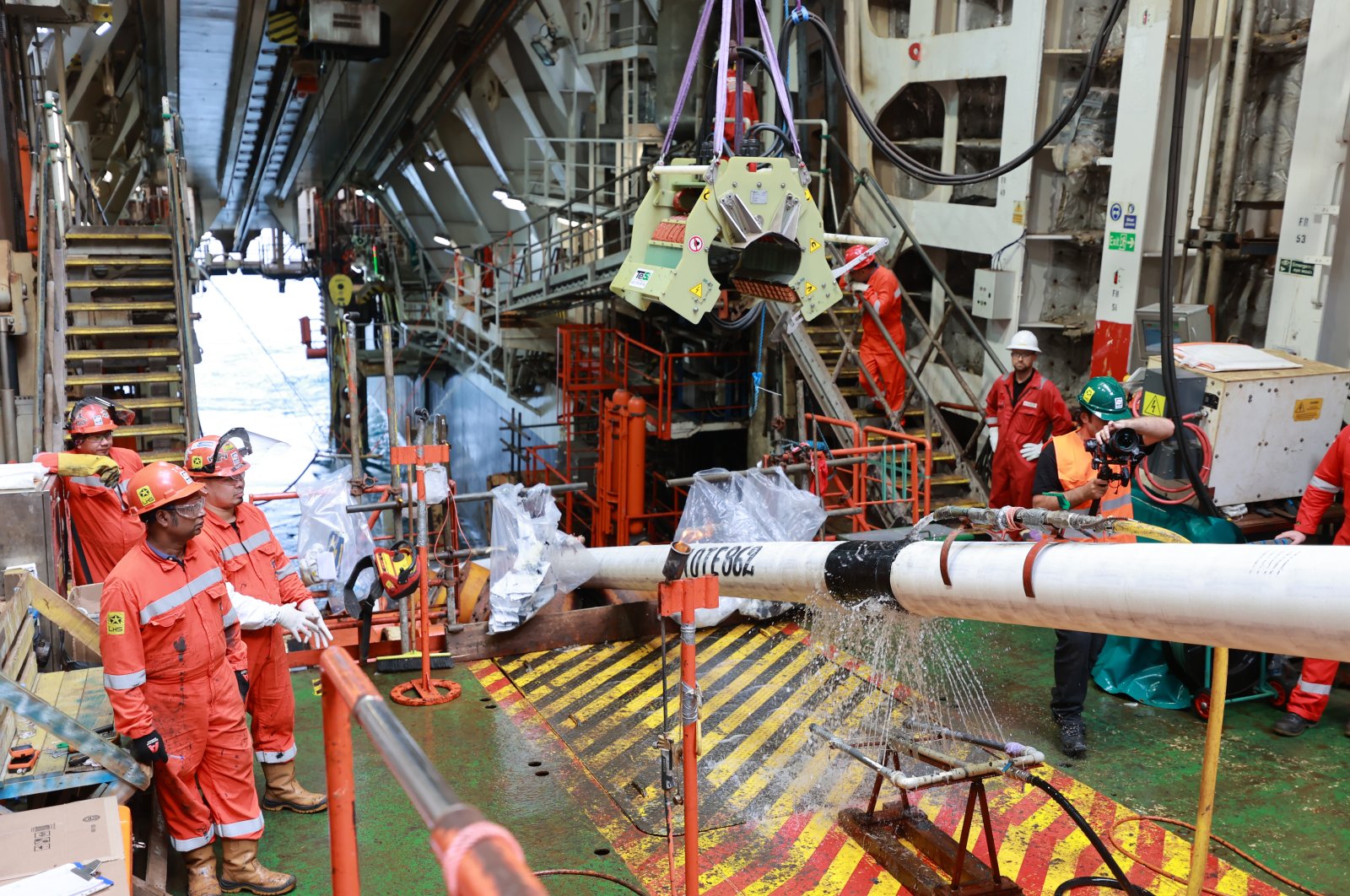 Pipes that will transport Türkiye's natural gas are being laid in the Black Sea off the northern province of Zonguldak, Türkiye, Sept. 20, 2022. (AA Photo)
by Daily Sabah with AA Sep 20, 2022 3:21 pm
RECOMMENDED

The laying of pipes for an underwater network that will transmit onshore natural gas Türkiye discovered in Black Sea waters has mostly been completed, the country’s energy and natural resources minister said Tuesday.

Work on the gas reserve discovered in the Sakarya field, located offshore the northern province of Zonguldak, has been fast-tracked as the energy-dependent country seeks to cover its needs in the years to come.

Due to stream next year, the field is slated to hold around 540 billion cubic meters (bcm) of gas that was gradually discovered since August 2020. Türkiye looks to start pumping the gas to its main grid as soon as March of 2023, with sustained plateau production expected to start some three to four years later.

“As we have stated before, we plan to realize the first gas flow to our citizens in the first quarter of the 100th year of our republic, in March,” Energy and Natural Resources Minister Fatih Dönmez said.

Some 140 kilometers (87 miles) of the 170-kilometer-long pipeline that will connect the wells in the Sakarya field to the gas processing facility in Zonguldak have been completed, Dönmez told reporters after he arrived for an on-site examination.

“At the moment, 140 kilometers of the 16-inch (41-centimeter) diameter main pipeline that will transport natural gas has been completed, about 20-25 kilometers remain,” he noted.

The subsea pipelaying started in June and pipes have been installed at a depth of approximately 2,200 meters. Saipem pipelay vessels Castorone and Castoro 10 are responsible for the pipelaying works.

Casterone is installing the 165-kilometer deep-water section, while Castoro 10 has been given the task to install 5 kilometers of pipeline in shallow water.

Türkiye looks to transfer 10 million cubic meters (mcm) of natural gas per day as of the first quarter of next year and President Recep Tayyip Erdoğan said the production would reach its peak by 2026.

Türkiye is almost completely dependent on imports to cover its energy needs, which leaves it vulnerable to rising costs that skyrocketed following Russia’s invasion of Ukraine, and domestic demand has risen since the pandemic.

One of the largest gas importers in Europe, Türkiye depends on pipeline gas from Russia and Iran, as well as Azerbaijan, and liquefied natural gas (LNG) imports from Nigeria, Algeria and spot markets.

Last year, 45% of the gas used in Türkiye came from Russia and the rest from Iran and Azerbaijan.

Dönmez stated that the ships that will install data and signal lines were also on the way. “As of now, we have 30 ships working at sea and there are about 2,500 employees. The number of people working on the land is around 5,500. In total, 8,000 employees continue to work on the project without interruption,” the minister noted.

Work is underway as planned on the facility where the incoming gas will be refined, Dönmez said.

“BOTAŞ’s (Petroleum Pipeline Corporation) measuring station is around 80% complete. It will be ready for testing on Oct. 15. About 70% of the pipelines have been completed, and the work on the ground will hopefully be completed in November,” the minister noted.