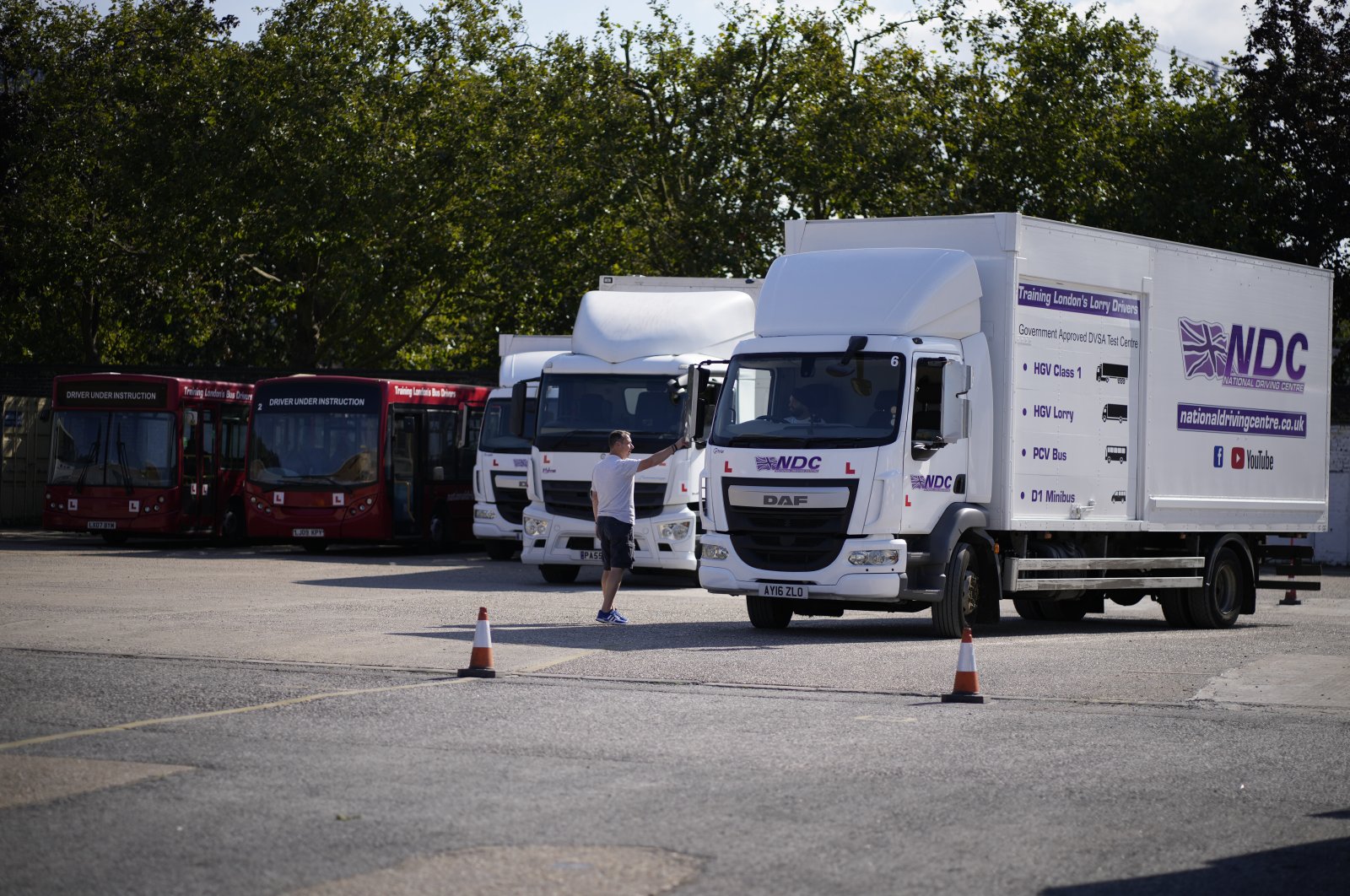 Britain will issue up to 10,500 temporary work visas to truck drivers and poultry workers to ease chronic staff shortages, the government announced Saturday, in a U-turn on post-Brexit immigration policy.

Yet, the move is a short-term fix that will not solve an acute labor shortage that risks major disruption for retailers in the run-up to Christmas, business leaders have warned.

The short-term visas, to run from next month until late December, come as ministers grapple with a huge shortfall in drivers and some other key workers that has hit fuel supplies and additional industries.

A shortage of tanker drivers has caused large lines at gas stations in recent days, as people ignore government pleas not to panic-buy fuel after some stations closed due to the lack of deliveries.

The decision to expand the critical worker visa scheme is a reversal by Prime Minister Boris Johnson, whose government had tightened post-Brexit immigration rules, insisting that Britain's reliance on foreign labor must end.

It had resisted the move for months, despite an estimated shortage of around 100,000 heavy goods vehicle (HGV) drivers and warnings from various sectors that supplies would run short.

Transport Secretary Grant Shapps nevertheless insisted he was taking action "at the earliest opportunity" and that a broader package of measures announced would ensure pre-Christmas preparations "remain on track."

"The industries must also play their part with working conditions continuing to improve and the deserved salary increases continuing to be maintained in order for companies to retain new drivers," he added.

But business leaders dismissed the new measures as inadequate.

"This announcement is the equivalent of throwing a thimble of water on a bonfire," said Ruby McGregor-Smith, president of the British Chambers of Commerce.

The additional testing would take time to impact while new visa numbers were "insufficient" and not "enough to address the scale of the problem," she added.

Andrew Opie, director of food and sustainability at the British Retail Consortium, who warned on Friday the government had just 10 days to solve the driver shortage issue, said the plans were insufficient.

"The limit of 5,000 visas will do little to alleviate the current shortfall," he said. "Supermarkets alone have estimated they need at least 15,000 HGV drivers for their businesses to be able to operate at full capacity ahead of Christmas and avoid disruption or availability issues."

Others have cautioned European drivers may not want to work in Britain again anyway.

"I expect many drivers will not return to the U.K. even if the U.K. government allows them to," said Marco Digioia, general secretary of the European Road Haulers Association, told the i newspaper.

The new measures will focus on rapidly expanding the number of new domestic drivers, and include deploying Ministry of Defense driving examiners to help provide thousands of extra tests over the next 12 weeks.

Nearly 1 million letters will also be sent to all drivers who currently hold an HGV license, asking any not currently driving to come back to work.

Johnson has been under increasing pressure to act, after the pandemic and Brexit combined to worsen the hauler shortage and other crises emerged, including escalating energy prices.

As well as threatening timely fuel supplies, the lack of truck drivers has hit British factories, restaurants and supermarkets in recent weeks and months.

U.S. burger chain McDonald's ran out of milkshakes and bottled drinks last month, fast-food giant KFC was forced to remove some items from its menu, while restaurant chain Nando's temporarily shut dozens of outlets due to a lack of chicken.

This week it was the turn of the fuel sector, with growing lines of cars clogging the approaches to gas stations following some closures and panic-buying, particularly in southeast England.

Drivers appeared less than reassured Saturday, with long lines again forming at gas stations as motorists waited, some for hours, to fill up with fuel.

Mike Davey, 56, had been waiting more than half an hour to fill up at a gas station run by the supermarket chain Tesco in Kent, southeast of London.

"I just want to get some fuel to get to work. People are just like filling up jerry cans – it's ridiculous," he told the Agence France-Presse (AFP). "Maybe they need to bring some army drivers in," Davey added.

The government has so far resisted calls to deploy soldiers to help deliver petrol directly.

As part of the measures announced, taxpayers will also help pay for some adult HGV license applications in the next academic year – which can cost thousands of pounds – through an adult education budget fund.