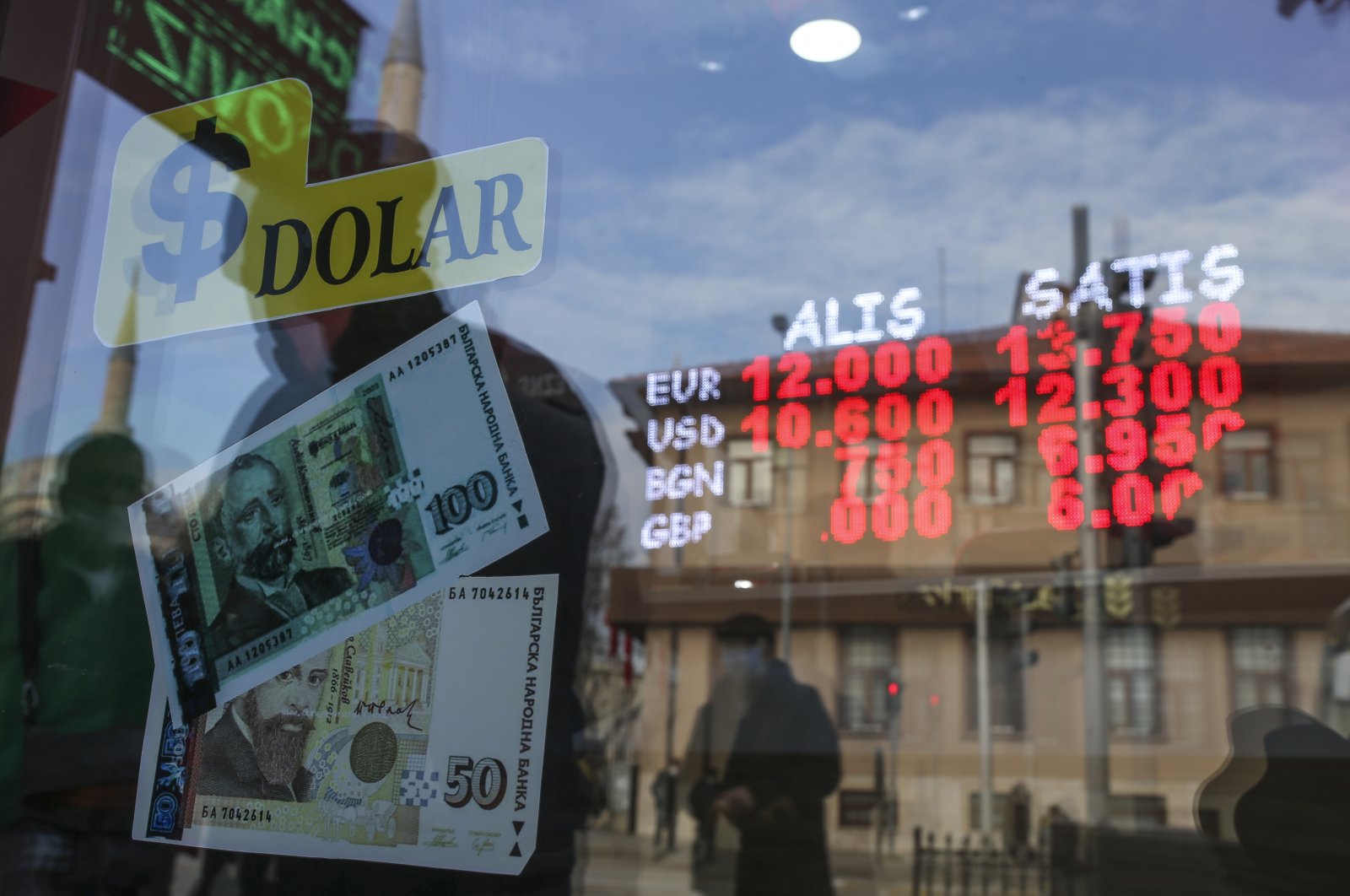 People are seen in front of an exchange office in the northwestern province of Edirne, near the Bulgarian border, in western Turkey, Dec. 24, 2021. (AP Photo)
by Daily Sabah with Reuters Jan 07, 2022 1:09 pm
RECOMMENDED

Turkey’s central bank has sought to address exporters’ concerns over a new requirement for them to convert a quarter of their foreign exchange revenues to the Turkish lira, saying it will not burden them and that stabilization was expected in the period ahead.

The Central Bank of the Republic of Turkey (CBRT) will buy 25% of all income from exports of goods so long as the exporters receive payments in United States dollars, euros or pounds, it said in a decree this week, the latest step in the authorities’ efforts to boost its reserves and support the local currency.

Exporters have told the bank they may struggle to meet a new requirement and could also be left exposed to volatility in the lira, three exporters told Reuters on Thursday.

They said they expressed their concerns about the regulation in an online meeting with CBRT Governor Şahap Kavcıoğlu on Wednesday.

According to the exporters, Kavcıoğlu told them that the lira would now stabilize and the exporters should not be concerned.

He also told the exporters they could expect new credit lines from the central bank and state-controlled export bank Türk Eximbank.

Exporters who attended the meeting had said they were worried that the requirement to convert substantial amounts of money to lira, some of which would have to be switched back to foreign currency to pay costs, would bring risk.

“There was an expectation for an instrument similar to a forex rate guarantee for the 25% portion to be sold to the central bank,” one of the exporters said, referencing a deposit-protection scheme unveiled for individuals last month.

“However, Kavcıoğlu said they expected a stabilization in the exchange rate ... He said we wouldn’t have a big loss when buying and selling.”

“We were told at the meeting that we wouldn’t face issues in finding forex,” the same source added.

President Recep Tayyip Erdoğan unveiled the deposit scheme on Dec. 20 after the lira fell to a record low of 18.4 to the dollar, offering to compensate savers for losses incurred due to depreciation during the deposit term.

The initiative had reversed the lira slide and triggered a historic 50% surge in the currency’s value in the week through Dec. 24. But it still ended the year lower and fell 5% this week after inflation surged to a 19-year high of 36.1%.

Erdoğan has been endorsing a policy path based on lower borrowing costs, which he says will promote exports, lending and growth.

Inflation has been around 20% in recent months, driven by the lira slide after the central bank slashed its policy rate by 500 basis points to 14% from 19% since September. It will hold its next rate-setting meeting on Jan. 20.

Textile Exporters and Employees Association (TIHCAD) Chairperson Ergin Aydın, who did not attend the meeting with Kavcıoğlu, said textile exporters would have difficulty meeting the requirement to convert 25% of revenues into the lira since the currency made up only 18% of their expenses.

The required conversion would hit profits, which have margins of 7-8%, “It doesn’t add up,” he said.