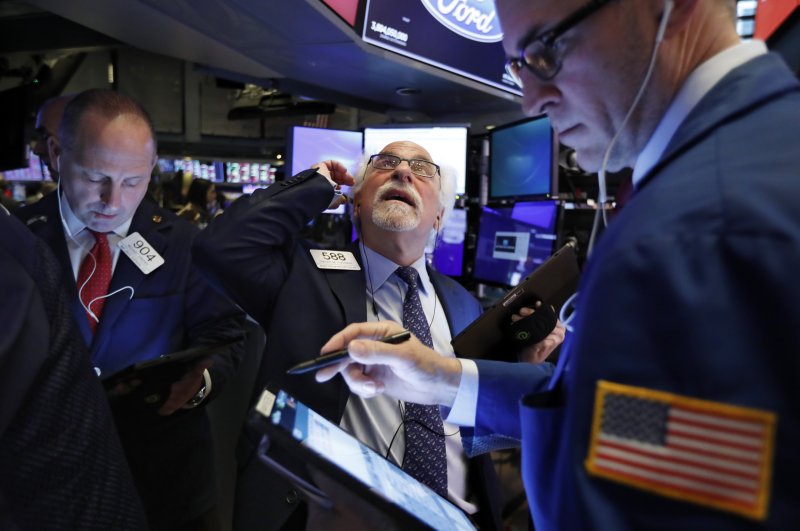 The widening coronavirus outbreak threatens to seriously disrupt the global economy just as it was steadying itself against headwinds from the U.S.-China trade dispute.

The blue-chip Dow Jones Industrial Average index briefly fell more than 1,000 points, as investors dumped riskier assets after a jump in coronavirus cases outside China fueled global growth worries, while in Europe, the pan-European Stoxx 600 dipped 3.6 percent amid fears about the first major outbreak on the Continent, an eruption of cases in Italy. Cases were also reported in new countries in the Middle East.

Concerns are high in Europe, where the three largest economies are already scraping along at the edge of recession, with Germany particularly exposed. China, the epicenter of the crisis, is a major sales market for German automobiles and serves as a source of parts for Germany's own factories.

The global economy was just stabilizing after wobbles caused by the trade war between the U.S. and China and fears of a disorderly British exit from the European Union. The coronavirus hit just as a U.S.-China preliminary deal and a Britain-EU agreement on a transition period had boosted hopes for a modest upswing, particularly in Europe.

Now the world economy could see its first quarterly fall in seasonally adjusted output since the global financial crisisof more than a decade ago, says Ben May, director of global macro research at Oxford Economics.

Frequent business and tourism destinations for people from China are already being hit hard, confirming that this will be a key way that the pain will spread to other Asian economies, with Singapore and Hong Kong feeling the effects.

Comparisons to the 2003 SARS epidemic, another deadly outbreak that originated in China, aren't reassuring because China's share of the global economy is much bigger than it was back then, and supply chains moving raw materials, parts and products snake through the global economy more than ever.

Stock markets may have been slow to appreciate the risk posed by the coronavirus because they hoped central banks could step in with stimulus. Erik Nielsen, group chief economist at UniCredit, said that while monetary or fiscal stimulus can boost demand in an economy, the virus is interrupting supply — which may not be so easy to boost with policy tools.

"Think of it this way: China has closed a reported 70,000 movie theaters because of the virus. That's a supply shock, and no amount of income (demand) stimulus will boost ticket sales," he said.

He said it is now "a virtual given" that global domestic output will take "a major hit" in the first quarter of the year.

While the stock markets seem to be acting as if the virus will be a short-term story with an early rebound, he said, "there is no evidence to support such an outlook."

Individual companies have already reported trouble, most notably Apple, which said it will miss its sales target. But it could take until April or May before hard data on production and sales gives a clear picture of the impact on a regional or global level, May said.

Anxiety has risen in Germany, where stocks fell 4 percent on Monday.

"Given the latest developments, one has inevitably to talk about downside risks for German exporters," said Andreas Rees, chief German economist at UniCredit. "The coronavirus could become a major trigger in dampening both the global demand and supply side."

Rees cited figures showing car sales in China fell 92 percent in the first two weeks of February, and pointed out that of the 21 million cars sold in China last year, about 1 in 5 was made either in Germany or through German investment in China. Most Chinese auto showrooms are closed.

Rees echoed May in saying there is "huge uncertainty" about the impact. That in itself can be a drag on investment and ambitious business planning.

Europeans had been hoping for a modest upturn this year after major economies staggered through a rough patch at the end of the year. Germany showed zero growth in the fourth quarter, while the No. 2 and No. 3 economies, France and Italy, shrank slightly. Two straight quarters of falling growth are one definition of a recession

The new head of the European Central Bank, Christine Lagarde, has so far focused on a review of the bank's monetary policy strategy amid hopes that a stimulus package enacted under her predecessor Mario Draghi would see the eurozone economy through and help strengthen growth and inflation. But markets are now pricing in a bigger chance for a rate cut by July. The ECB has already cut rates into unprecedented negative territory. Its key benchmark deposit rate is an minus 0.5 percent.

Kristalina Georgieva, the head of the International Monetary Fund, said that the fund's baseline scenario is that China's economy slows but returns to normal in the second quarter, meaning the impact is minor and short-lived.

"But we are looking at more dire scenarios, where the spread of the virus continues for longer and more globally, and the growth consequences are more protracted," she said.

The Federal Reserve is keeping an eye on the coronavirus, but so far has made no policy changes. Testifying to Congress on Feb. 11, Fed Chairman Jerome Powell said that it was too early to assess the scope of the impact the virus poses to the U.S. economy. He noted that at the moment the economy "is in a very good place "with strong job creation and steady growth.

Powell indicated in his congressional testimony that he saw no need to change the Fed's benchmark interest rate, which is in a range of 1.5% to 1.75% after three rate cuts in 2019.

Raphael Bostic, head of the Fed's Atlanta regional bank, said Friday that he expected the coronavirus to "be a short-time hit; we'll get the economy back to its usual level" after the adverse effects pass.

The U.S. economy continues to look resilient, growing at a solid 2.1% annual rate the last three months of 2019. American consumers are driving the record-breaking expansion, now in its 11th year.

Business investment has been weak, partly because President Donald Trump's trade wars have generated uncertainty about where companies should locate factories and buy supplies. Investment could get weaker if the virus continues to disrupt the supply chains American businesses rely on.