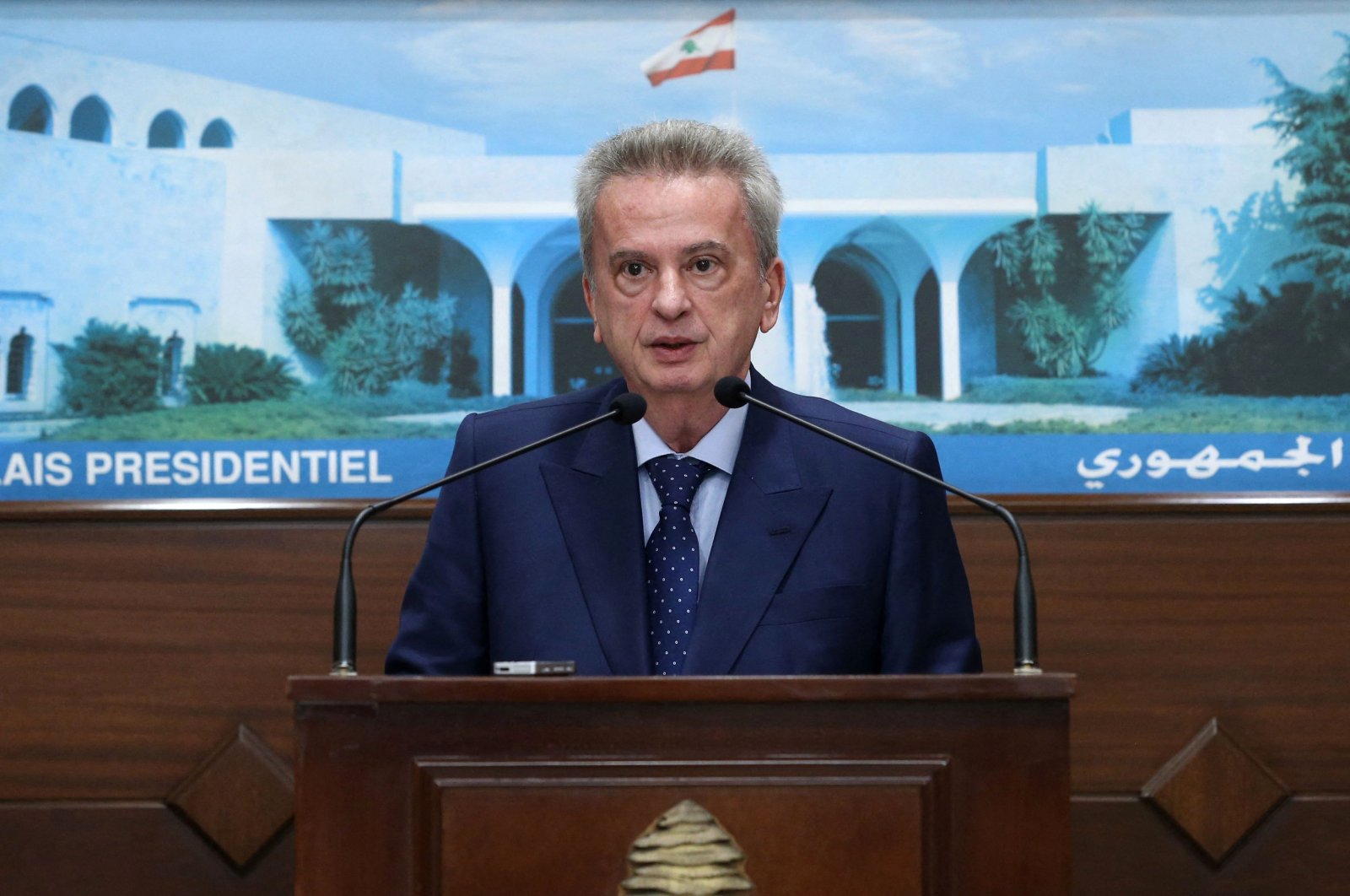 In this file handout photo provided by the Lebanese photo agency Dalati and Nohra on June 3, 2021, Lebanon's Central Bank Governor Riad Salameh addresses the media after a meeting with the country's president at the Baabda presidential palace, east of the capital Beirut, Lebanon. (AFP Photo)
by French Press Agency - AFP
Jun 06, 2021 1:18 pm

France has launched a probe into the source of the personal wealth of crisis-hit Lebanon's central bank chief, Riad Salameh, sources said Sunday.

Financial prosecutors in Paris have opened a preliminary probe into the alleged criminal ties and money laundering activities of Salameh, according to a source close to the investigation and a judicial source speaking to Agence France-Presse (AFP), following a similar move by Switzerland.

Its findings could shed light on the origins of the 70-year-old former Merrill Lynch banker's wealth.

In the post since 1993 and once hailed by political and business leaders, Salameh has been repeatedly accused by the government of caretaker Prime Minister Hassan Diab of being responsible for the collapse of the Lebanese pound.

The Lebanese public suspects him and other high officials of transferring money abroad during a 2019 uprising when ordinary people were prevented from doing so.

Lebanon has since been hit by an economic crisis that the World Bank says is one of the worst anywhere since the 19th century.

Close to the powerful Hariri family, Salameh has been under investigation for months in Switzerland on suspicion of serious money laundering and embezzlement from the Bank of Lebanon.

He also owns several properties in France and may have transferred money via the country.

One of the criminal complaints that prompted French prosecutors to get involved came from the Swiss foundation Accountability Now, the daily Le Monde reported.

Another was filed by the anti-financial crime group Sherpa and by the Collective of Victims of Fraudulent and Criminal Practices in Lebanon, set up by savers devastated by the post-2019 crisis.

The French move signals the start of "a universal mega-investigation across Europe," said William Bourdon and Amelie Lefebvre, lawyers for Sherpa and the savers' collective.

"Enormous money laundering operations will be examined, which ought to open every nook and cranny of the mafia that has brought Lebanon to its knees," they hope.

Their criminal complaint, seen by AFP, accuses Salameh and people close to him – his brother Raja, his son Nadi, a nephew and an aide at the central bank – of fraudulently building a vast fortune in Europe.

The groups have urged the judiciary to investigate massive capital flight from Lebanon since the crisis began, as well as property purchases out of proportion to the buyers' income and the roles played by financial intermediaries, tax havens and strawmen.

Based especially on reports by Lebanese website Daraj.com and the Organized Crime and Corruption Reporting Project, the plaintiffs believe that Salameh's worldwide total wealth amounts to more than $2 billion.

He contests that figure, saying his holdings stem from inheritances, his banking career and legitimate investments since taking office in 1993.

The French prosecutors' investigation is the latest in a string of probes into "ill-gotten gains" of foreign leaders – especially from Africa or the Middle East.