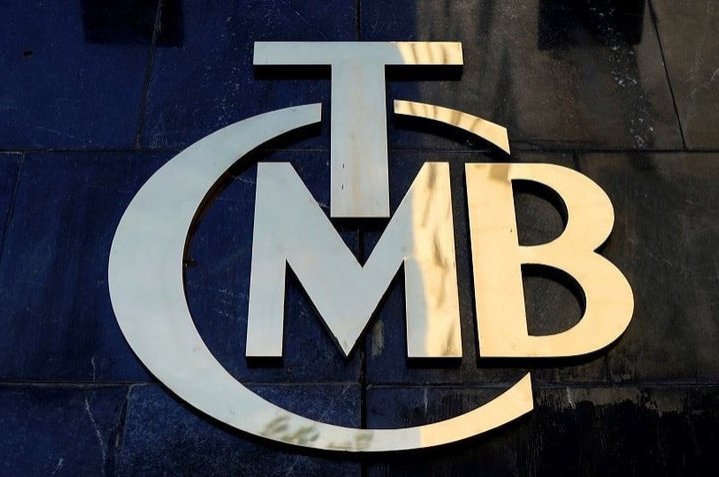 The logo of the Central Bank of the Republic of Turkey.
by Daily Sabah with Wires Apr 22, 2020 1:26 pm
Edited By Ayşe Betül Bal

The bank says it considers year-end inflation projection risks to be low as international commodity prices continue their sharp decline, especially in crude oil and metal, making for a favorable inflation outlook

The Central Bank of the Republic of Turkey (CBRT) slashed its policy rate by a more-than-expected 100 basis points to 8.75% Wednesday, in a muscular bid to keep stimulating the economy and mitigate the fallout from the coronavirus pandemic.

In a statement after the meeting, the bank said the fallout from the outbreak has started to hit trade, tourism and domestic demand so it was “crucial” that policy ensures that markets are functioning and credit is flowing.

It also stressed it will continue to use all available instruments in pursuit of price and financial stability objectives.

The bank said the move was also justified because falling global energy prices are lowering inflation expectations in Turkey, a big importer of oil.

“Despite the recent depreciation in the Turkish lira due to global developments, (a) continued sharp decline in international commodity prices, especially crude oil and metal prices, affects (the) inflation outlook favorably,” it said. “Risks on the year-end inflation projection are on the downside.”

"As developments regarding the spread of the coronavirus substantially weaken global growth outlook, central banks in advanced and emerging economies continue to take expansionary measures," the statement read. "The pandemic disease is closely monitored for its evolving global impact on capital flows, financial conditions, international trade and commodity prices."

The bank cut its benchmark one-week repo rate by 100 basis points last month from 10.75% in an earlier-than-scheduled meeting of the MPC, shortly after the first confirmed case of the new coronavirus in Turkey.

Its policy rate last month touched single-digit figures for the first time since mid-2018. Since the beginning of this year, the bank has cut the rate by a total of 325 basis points.

ING said it expected the bank to reduce the policy rate by 75 basis points to 9%, as it noted the bank seems determined to mitigate the downside risks to growth.

International investment bank JP Morgan was expecting a symbolic 25 basis-point cut, saying that despite the weak course in Turkish lira, the decrease in inflation expectations may also cause the central bank to continue with interest rates cut.

ING has also noted that the central bank can act by depending on the supportive shift in global policies, as well as the local inflation backdrop, which is being weighed down by a widening output gap.

Inflation was a pressing issue for the economy after it surged to a 15-year high of above 25% in October 2018 but briefly touched single digits last fall thanks largely to a base effect and tight monetary policy.

The decline in inflation allowed the CBRT, which had hiked its key policy rate to 24%, where it stayed until last July, to slash rates by 1,525 basis points since then to boost growth.

The country’s inflation rate fell to 11.86% in March as a drop in global oil prices provided some relief after increasing for four consecutive months. Month-on-month consumer prices rose 0.57% in the month.

The bank predicted that inflation would fall to 8.2% by the end of the year. The government's year-end inflation target is 8.5% for 2020, as laid out in the government's New Economic Program (NEP) announced last September.

Besides rate cuts, the bank has ramped up support for the economy in other ways, for example, buying nearly TL 27 billion ($3 billion) of government debt, including TL 15.6 billion from Turkey's unemployment insurance fund, since the end of March.

It has also provided funding below the policy rate and ramped up its quantitative easing measures by doubling its effective limit on purchases this year to 10% of its total assets.

After holding eight MPC meetings last year, in 2020 the bank decided to increase the number of annual meetings to 12.