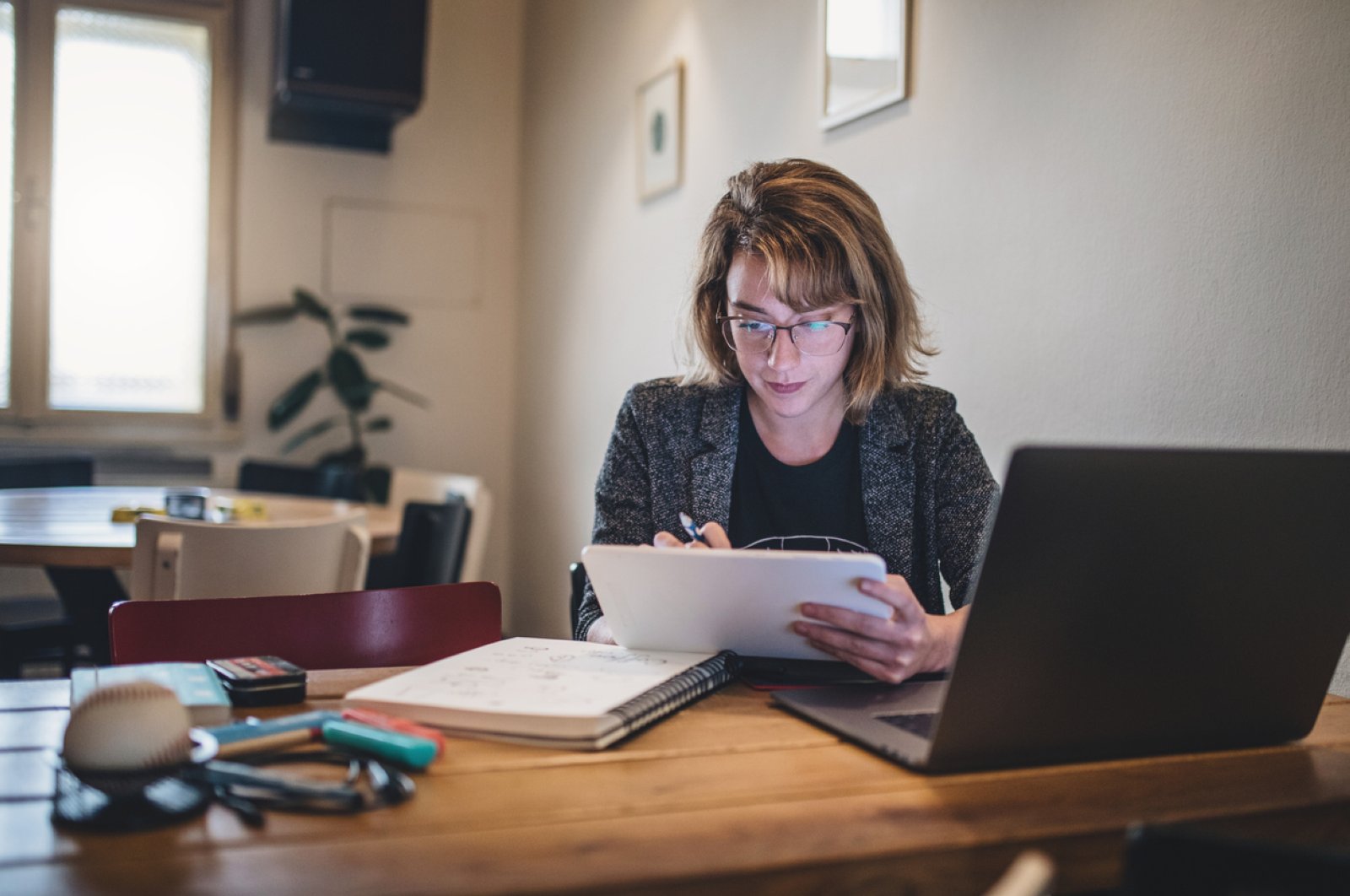 Working from home may be permanent for some companies worldwide in the post-pandemic era. (iStock Photo)
by DAILY SABAH WITH AGENCIES May 18, 2020 12:48 pm
RECOMMENDED

As the coronavirus lockdown eases worldwide and businesses gradually begin to reopen, the boom in remote work raises the question of whether the home office practices adopted in the past several months will prompt companies to slash office space in the post-pandemic period – a move that would save them money but not necessarily improve productivity among staff, according to experts.

A recent survey by real estate consultancy Cushman & Wakefield of 300 companies worldwide showed 89% of them believed remote work would continue beyond the pandemic.

Major financial districts, such as London's Canary Wharf and La Defense in Paris, remain extremely quiet, even as governments lift restrictions on social distancing and travel by public transport.

Twitter CEO Jack Dorsey recently said some of the social media giant's employees could do their jobs from home on a permanent basis.

Jes Staley, CEO of British bank Barclays, meanwhile, has said "the notion of putting 7,000 people in a building may be a thing of the past.”

"We will find ways to operate with more distancing over a much longer period of time," he added.

French car giant PSA, which makes Peugeot and Citroen vehicles, now sees remote work as a benchmark for tens of thousands of its office-based staff.

According to the statement made by the company, PSA already allowed 18,000 employees to work remotely last year, saving 500,000 hours on the road.

"The revolution is going to come with a mindset shift," said Cydney Roach, global chair of employee experience at U.S. consultancy Edelman.

"Companies have been debating on the future of work for 10 years, but people were really not very keen to pull the trigger and commit to it fully," she told Agence France-Presse (AFP), adding that the "pandemic has proven that the technology is supportive of this kind of remote working."

Roach said "flexibility is going to take on a bigger meaning," adding that bosses should listen to employees' views on the matter.

Already, around 95% of 107,000 staff at British advertiser WPP are working remotely.

Real estate developer Land Securities last week estimated that only 10% of its office space was being used.

Avi Alkaş, the board chairman of Alkaş, a seasoned business in the real estate, retail and office sector, said that there will be serious changes in office use, as from now on, shared offices will come to the fore instead of working in a single building.

Those offices will be at several points of the city and will be used only when needed, allowing employees to go their workplaces on foot, reducing the risk of human contact.

Alkaş said that "employee dormitories" can also be an important option for Turkey in this period, noting that some employees can save even three hours daily by living in dormitories located in central locations.

Cushman & Wakefield Managing Partner Tuğra Gönden said that there are two major questions regarding post-pandemic office use: How can one achieve social distancing in the office? Will the employees get infected on their way to the office?

Gönden said that if the space required to keep social distancing at current offices is maintained, a maximum of 1-in-4 of the current employees would have space to work in the office.

“Transformation has started. Each business line will implement a model according to its own needs. But it seems that we will not be in the offices five days a week anymore," Gönden said.

In a recent blog, professors Clare Lyonette and Beate Baldauf pointed out the advantages of working from home.

"The majority of research highlights positive organizational outcomes ... including cost savings, better productivity, improved recruitment and retention and reduced absenteeism," said the academics from the University of Warwick in central England.

But they cautioned, "Employers should be aware of the potentially negative effects this may incur over the longer-term.

"For example, reduced well-being and loyalty to the organization may lead to reduced productivity, which will serve to deplete any savings made from reduced office space and resources," they said.

According to VPN provider NordVPN, some remote employees are working longer hours than they would in an office, affecting their work-life balance while not necessarily making them more productive.