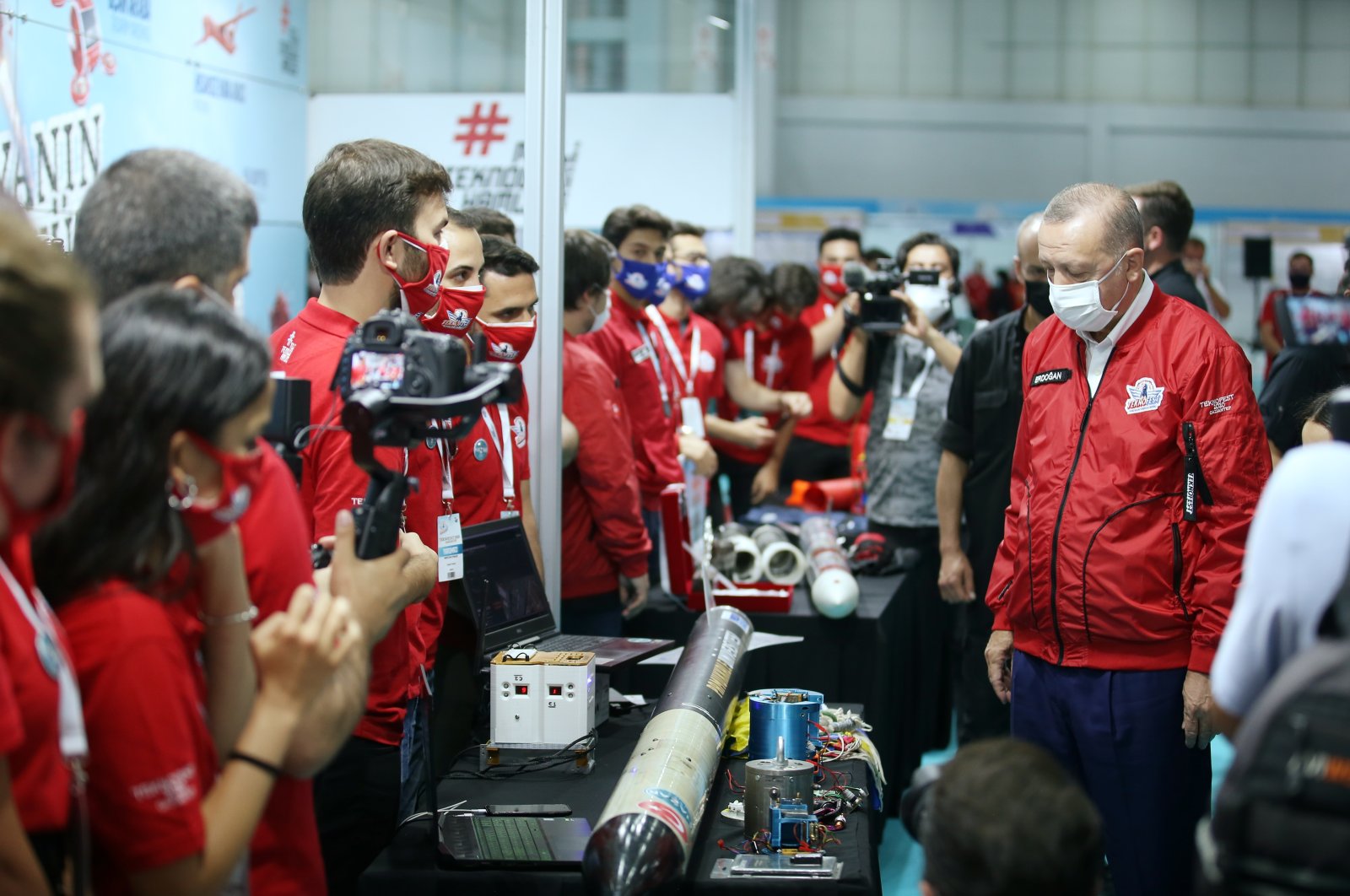 President Recep Tayyip Erdoğan examines projects on the sidelines of the aerospace and technology festival, Teknfest, in the southeastern province of Gaziantep, Turkey, Sept. 26, 2020. (AA Photo)
by DAILY SABAH WITH AA Sep 27, 2020 12:50 pm

President Erdoğan stressed Turkey needs successful young people to reach its goals as he vowed the country would continue to back young people with its sound infrastructure, support, and platforms like Teknofest

Teknofest is an annual event for young people who want to showcase their abilities in technological fields, such as rocketry, robotics and aerospace design, the president said at the event, held this year in the southeastern metropolis of Gaziantep.

The four-day Teknofest, which ended Sunday, saw youngsters from across the country showcasing projects they have spent the year preparing.

The festival is jointly organized by the Turkish Technology Team Foundation (T3) and the Industry and Technology Ministry.

The president said productive minds were the most important factor in boosting technology and that Turkey needed successful young people to help achieve its goals.

Although large crowds attended the first two Teknofests, this year's event was not accepting visitors due to the coronavirus pandemic. "But no virus or threat can stop young people's perseverance," the Erdoğan said.

He said around 20,000 teams and 100,000 young people from 84 countries applied to take part in this year's Teknofest competitions.

Turkey will continue to back young people with its strong infrastructure, support and platforms such as Teknofest, he added.

"We can't say that everything is ideal, but we're determined to support you," said Erdoğan. "We will address the shortcomings, correct mistakes, meet needs and remove all hurdles, so long as you don't stop working to make your dreams come true."

'Tech a must, not an option'

The president also said while in decades past Turkey had no presence in aviation, it is now among a small list of countries in the world producing unmanned aerial vehicles (UAVs).

"We will achieve similar successes in the production of automobiles and flying cars," he added.

The world now is in a technological transition process, and technology isn't an option, it's a necessity, he said. "More importantly, our experience shows us that we must make this transition with national and domestic resources," he added.

After the speech, Erdoğan cut the ribbon on 30 new technology courses opening in several cities, before handing out awards to the winning teams of the Teknofest's various competitions.

The festival included a host of activities, such as air shows involving warplanes and helicopters, as well as a series of seminars, summits, competitions and fairs.

This year's installment of the festival featured competitions in around two dozen different categories, including biotechnology innovation, agriculture, environment and energy, transportation, education, as well as helicopter and jet engine design.

The annual event was originally set for April but was postponed due to the pandemic. Teknofest is held in the metropolis of Istanbul in odd-numbered years but is held in various Turkish cities in even-numbered years.

Getting better with every year

Also speaking of the event, Haluk Bayraktar, vice-chair of the T3 Foundation, said Teknofest gets better and better feedback every year.

"Our goal is to move this organization much further in line with our experiences to realize the National Technology Move of our country," he told Anadolu Agency (AA).

"We have continued to organize Teknofest under pandemic conditions, in line with certain restrictions and closed to visitors so that these people's efforts are not in vain," he said.

Teknofest is a platform where young people's dreams are transformed into projects and projects become initiatives, said Bayraktar.

There were several competitions in different categories, including energy, defense, health and transportation.

Also speaking on the sidelines of the event, Deputy Technology and Industry Minister Mehmet Fatih Kacır said with the country's firm technological infrastructure and great potential, Turkey would be racing to the top of various fields within 10 years.

The National Technology Move, under the leadership of President Erdoğan, has boosted Turkey's technology infrastructure and environment, Kacır told AA.

The National Technology Move refers to the transformation of Turkey's technology industry through local and unique concepts. The term was first used in 2017.

Turkey has over 80 technoparks – special technology development zones – hosting over 6,000 firms performing research and development (R&D) activities, Kacır added. So far, more than 30,000 R&D projects have been completed, while 10,000 are ongoing, he said.

Turkey has also around 1,500 R&D and design centers while the number of R&D personnel increased by over three times to 180,000 in last 13 years, he also said.

Kacır added that these R&D activities started to bear fruits, first in the defense sector. "Now is the time to extend the success to other areas, such as energy, transportation, and health."

Touching on Turkey's medical ventilator production during the COVID-19 pandemic, he said technology and industry firms banded together to produce these devices, which were created by a start-up company.

Turning to the COVID-19 vaccine efforts, Kacır said Turkey was not just an "observer" of global efforts.

Turkey has joined the efforts with eight ongoing projects, some passing the animal trials phase and entering into clinical trials. "We hope to see results in the first quarter of 2021," he said.

Therefore, Turkey is now on the way to become a country developing and exporting high technology, he said.

He also recalled that Turkey, which can meet its own needs in every field, is working to produce its own electric train and electric car.

"We achieve similar successes in health, we will see great success stories in pharmaceuticals and medical devices in the upcoming period," Kacır stressed.

Gaziantep Mayor Fatma Şahin said Teknofest was not just a festival but an important step in Turkey achieving its target of self-reliance.

Turkey should strengthen its national technology infrastructure, she said, noting that this year, there are more than three times the projects in Teknofest than last year.