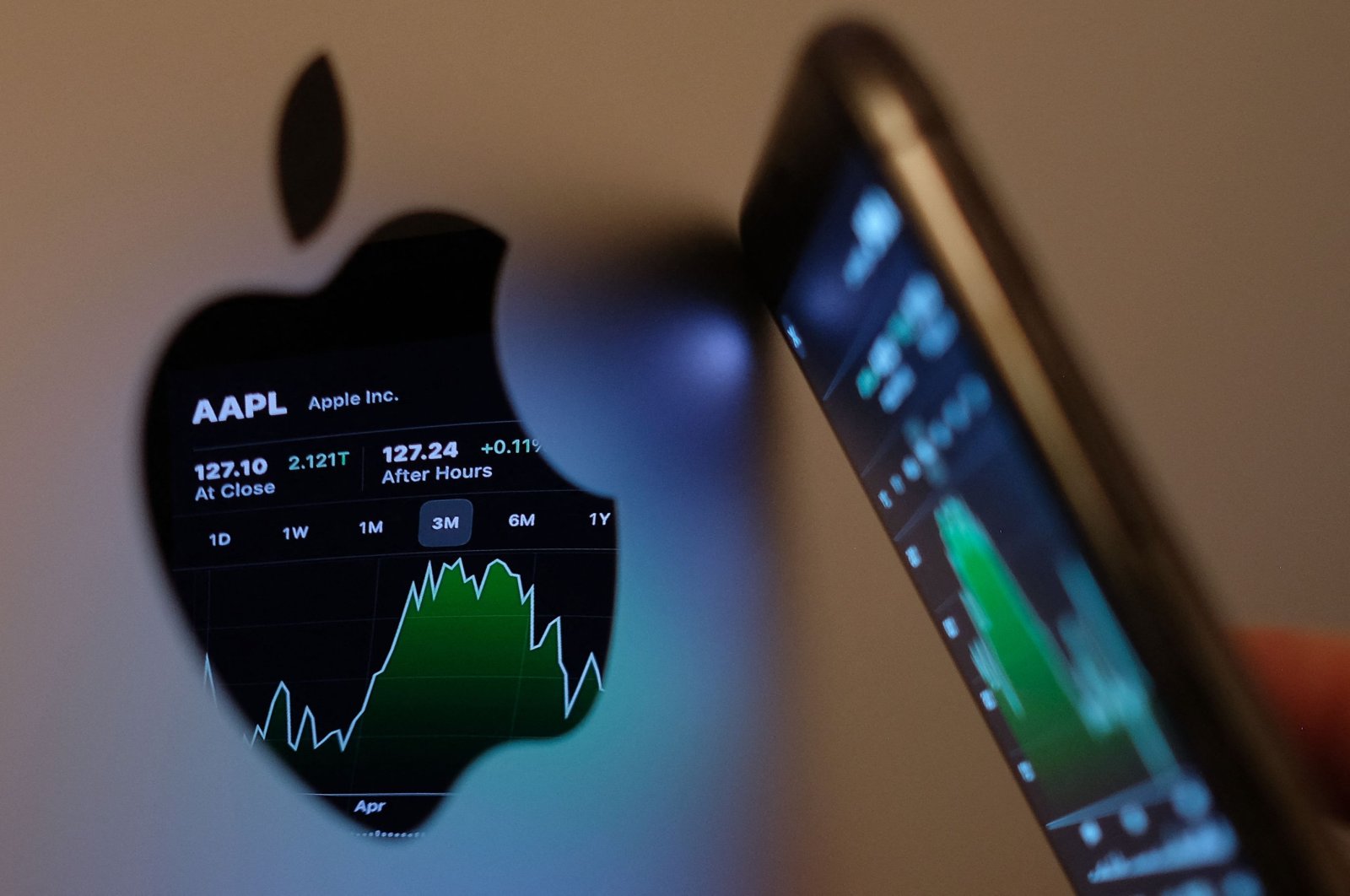 The Apple stock market ticker symbol AAPL is displayed on an iPhone screen and reflected in the logo of an iMac computer in Los Angeles, U.S., May 24, 2021. (AFP Photo)
by Agencies Oct 29, 2021 2:26 pm
RECOMMENDED

Amazon and Apple announced billions of dollars in quarterly profits Thursday, but supply chain bottlenecks and the global chip shortage dented the tech giants' gains, which have been riding a pandemic-stoked boom.

Apple said sales of its signature iPhone and iPad were held back due to supply constraints, while Amazon struggled to get products and enough workers to meet demand.

Both firms soared in the pandemic era as people relied on their products and services, but now the ripple effects that have emerged, such as lack of computer chips and spiking labor costs, are casting a shadow.

Amazon Thursday reported that its profit in the recently ended quarter slipped to $3.2 billion, as the pandemic, hiring and product shortages drove up costs.

The e-commerce colossus said its sales climbed to $110.8 billion, but its profit was about half of its net income from the same quarter last year.

"We've always said that when confronted with the choice between optimizing for short-term profits versus what's best for customers over the long term, we will choose the latter," said Amazon CEO Andy Jassy in a message explaining the company has had to spend more to do its work.

The iPhone maker said its net income of $20.5 billion came on revenue of $83.4 billion, a record high for its quarter ending in September.

The semiconductor drought – caused by a mix of factors, including a surge in demand due to the COVID-19 pandemic and United States-China trade tensions – has affected industries across the globe, from tech giants to carmakers.

"It's not a demand issue but a supply issue that continues to be the elephant in the room for Apple and every other tech/consumer player heading into holiday season," Ives wrote in a note to investors.

Apple CEO Tim Cook told an earnings call that one part of the supply problem was the chip shortage, while there were also COVID-19-related manufacturing disruptions in Southeast Asia.

"It is effecting pretty much all of our products," he said.

Cook estimated supply shortages cost the company about $6 billion in sales during the quarter.

The company's Chief Financial Officer Luca Maestri warned sales will be hurt even more during the current quarter that covers the pivotal holiday shopping season.

The results came after Microsoft, Google parent Alphabet and Facebook posted tremendous profits this week, although Twitter reported a large loss due to a shareholder lawsuit settlement.

Big Tech faces heightened scrutiny from antitrust regulators, especially Apple, which has appealed a major U.S. court ruling that would force the iPhone maker to loosen the stranglehold of its online app marketplace.

But the pandemic, which roared back to center stage in the U.S. with the delta variant surge, has bolstered the demand for online services.

In Amazon's case, a growing number of consumers have turned to its platform to get everything from tofu to toilet paper, and its cloud computing division also grew to help businesses and consumers stay connected.

Earlier in the week, Alphabet announced quarterly revenue of $65.1 billion that eclipsed the same period last year by some 41% as the firm's online ad engine and cloud services helped yield its $18.9 billion profit.

The Silicon Valley colossus remains a centerpiece of online activity, with offerings such as its search engine, ad marketplace and YouTube video platform that give it extensive global influence.

Google's results came the same day that Microsoft announced a quarterly earnings surge fueled by cloud computing demand, saying it made a profit of $20.5 billion as revenue jumped 22%.

The platform announced that its profit in the third quarter grew to $9.2 billion – a 17% increase – and its ranks of users increased to 2.91 billion.

Twitter, however, Tuesday posted a loss in the quarter, fueled by the more than $800 million settlement in a lawsuit alleging investors were misled about slowing user growth on the platform.