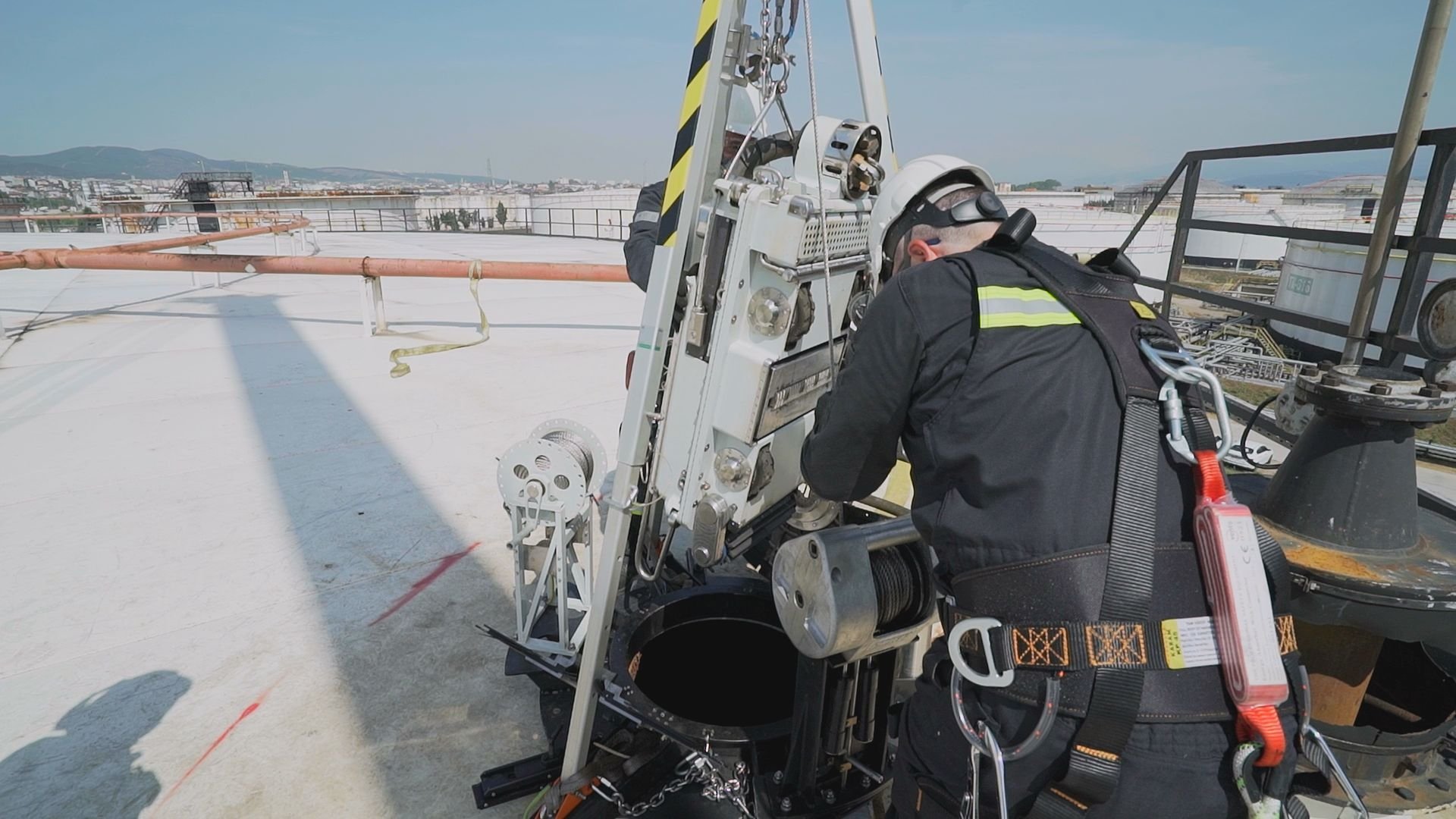 Jobs with high operating risk and data-driven solutions that increase productivity have enabled the data economy to grow during the pandemic period. Now, every factory is turning to business intelligence solutions for uninterrupted production

Interruptions in the supply chain during the coronavirus pandemic and problems in logistics that caused constant deviations from forecasts created significant problems for production-based economies.

Production and logistics problems experienced at factories in China prompted Europe to turn to Turkey. When China and the U.S. moved containers to their own countries, Turkey started transporting them to Europe with trucks. At this stage, uninterrupted production necessitated technology-oriented transformation.

This week, a Ventures60 event under the title "The Age of Uninterrupted Production" addressed a series of topics – from corporate intelligence solutions in the production of unmanned aerial vehicles used in Turkey’s largest refinery, Tüpraş, to corporate investors investing in production-oriented artificial intelligence (AI) and cyberattack threats.

Türk Telekom's business development and new ventures director, Muhammed Özhan, talked about an important project that will contribute to the data economy, carried out together with electronics maker Arçelik.

Expressing his satisfaction with the implementation of a sliced network project with Arçelik – which will be the first in Turkey – Özhan stressed that a strategic partnership agreement was signed between Arçelik, Nokia and Türk Telekom within the scope of establishing Turkey’s first 5G-ready private wireless network.

“In addition, Nokia and Türk Telekom will launch the first commercial private 4.9G/LTE network in Turkey. The industrial 5G-ready private wireless network will be installed at Arçelik’s washing machine production facility in Çayırova. Future-proof and ready for 5G, the Nokia network will accelerate Arçelik’s digital transformation and become a platform that will facilitate the implementation of Industry 4.0 usage scenarios.”

Another interesting project that came up at the Ventures60 event was drones being used at a facility for refinery giant Tüpraş in Izmit.

In the "Remote Visual Inspection with Drone" method, a drone designed for indoor space is used, equipped with robotic technologies and containing control software specific to the area of use.

Pressure equipment varying in height from 5 to 40 meters (16 to 131 feet) and robots working instead of humans in oil storage tanks at a depth of 15 to18 meters eliminates risks by minimizing human labor in closed areas.

In a remote visual inspection study performed using a drone, high-resolution images and sensor data taken from every point of the equipment in the closed area can be evaluated, and detailed examinations can be carried out with 3D modeling.

Tüpraş Izmit refinery manager Metin Tüfekçioğlu stated that the tank's periodical control processes – which take an average of seven months with the traditional method, from deactivation to recommissioning in storage tanks – can be completed in about a month with the online tank robotic control method.

“People are our most important resource. We act with the motto 'My Future is My Safety' by saying 'People First' in all our business processes,” Tüfekçioğlu said.

“We expect all our employees and solution partners to unconditionally comply with our health, safety, environment (HSE) and process safety standards. It is among our basic principles to ensure a safe work environment where our employees will not have to face risks by making use of technology at the highest level. With the proliferation of robotic technologies in our refinery sites, our primary goal is to support the human workforce with safety-oriented digital applications,” he noted.

Thus, he said that by making use of robot technologies for repetitive and risky tasks, they aim to involve their human resources in critical decision-making processes by improving their knowledge and experience diversity and competencies. In addition, he said they seek to increase efficiency and performance by saving resources and time.

Türk Telekom’s Özhan stated that an increase in the use of AItz is inevitable in order to cope with big data in production and drew attention to the investment they will make in four startups.

He noted that they signed their first contract with Syntonym, an eighth-term graduate of Türk Telekom's startup acceleration program PILOT.

“We put the first signature with one of them. Syntonym protects the privacy of individuals by anonymizing the data held by organizations that process and store visual data in accordance with the General Data Protection Regulation (GDPR) and Personal Data Protection Authority (KVKK), while ensuring that the data can be processed, shared and used as artificial intelligence training data without the need for explicit consent,” Özhan said.

Syntonym irreversibly replaces existing faces, which are biometric data in pictures and videos, with synthetic faces that never existed, preserving analytical metrics such as age, gender, head position and facial expressions, unlike traditional methods, he noted.

Özhan said this anonymization, which is done without deterioration, not only increases the accuracy and reliability of AI algorithms but also enables advanced data analysis.

“One of the other ventures is also used in production-oriented businesses. We plan to announce the other three by the end of the month,” he added.

Inal Technology founder Burhan Inal talked about how production in the southeastern Turkish city of Gaziantep has changed shape.

“We ensure that the company owns the knowledge that remains in the companies that install the machines and with the foreman,” Inal noted.

“Institutions producing in the plastic, textile and food sectors have now realized the data they have in production. This ended the conflict between departments. Capacity losses became measurable and steps were taken to eliminate losses. Now businesses know how much raw material to use. Accordingly, they struggle with the losses that occur between buying and selling,” he added.

Along with protecting personal and corporate data and account information, and preventing cybersecurity breaches and stolen credit cards, there have been recent discussions on how institutions, organizations and businesses will ensure their cybersecurity.

With the recent cyberattack on a major pipeline in the U.S., the issue has been occupying the agenda of production and energy companies.

Speaking at the Ventures60 event, Cerebrum Tech founder and chairperson Erdem Erkul underlined that it is essential to establish an in-house cybersecurity culture in this context.

“It seems that the pandemic process not only accelerates digital transformation but also increases the need for cybersecurity. The market volume, which was $167 billion (TL 1.45 trillion) in 2019, is expected to exceed $202 billion by the end of 2021,” Erkul further stressed.

He also shared the cybersecurity roadmap for corporations. “Senior management has a big responsibility in this regard, cybersecurity should be a subject that is taken seriously at the 'C level.' We see that it spreads to the base when it is felt by the employees that it is already respected in the senior management. Besides, cybersecurity software, rules and procedures should be created in accordance with the structure of the companies. Company employees should be subjected to cybersecurity training according to up-to-date information. Both software and employees must be fresh,” he noted.

Pointing to three very important points while taking cybersecurity measures, besides establishing a mechanism where all employees participate, Erkul cited that the first of these is to establish an in-house cybersecurity procedure. The second is to always keep systems, software and employees up-to-date and the third is to minimize risks arising from supply chain or third-party access.

Erkul also drew attention to cybersecurity cultures. “Of course, these are not limited to these three rules, we can count hundreds of cybersecurity threats according to the structure of each institution. Cybersecurity measures must be developed with methods such as policy managers, guest network management systems and network access control.”