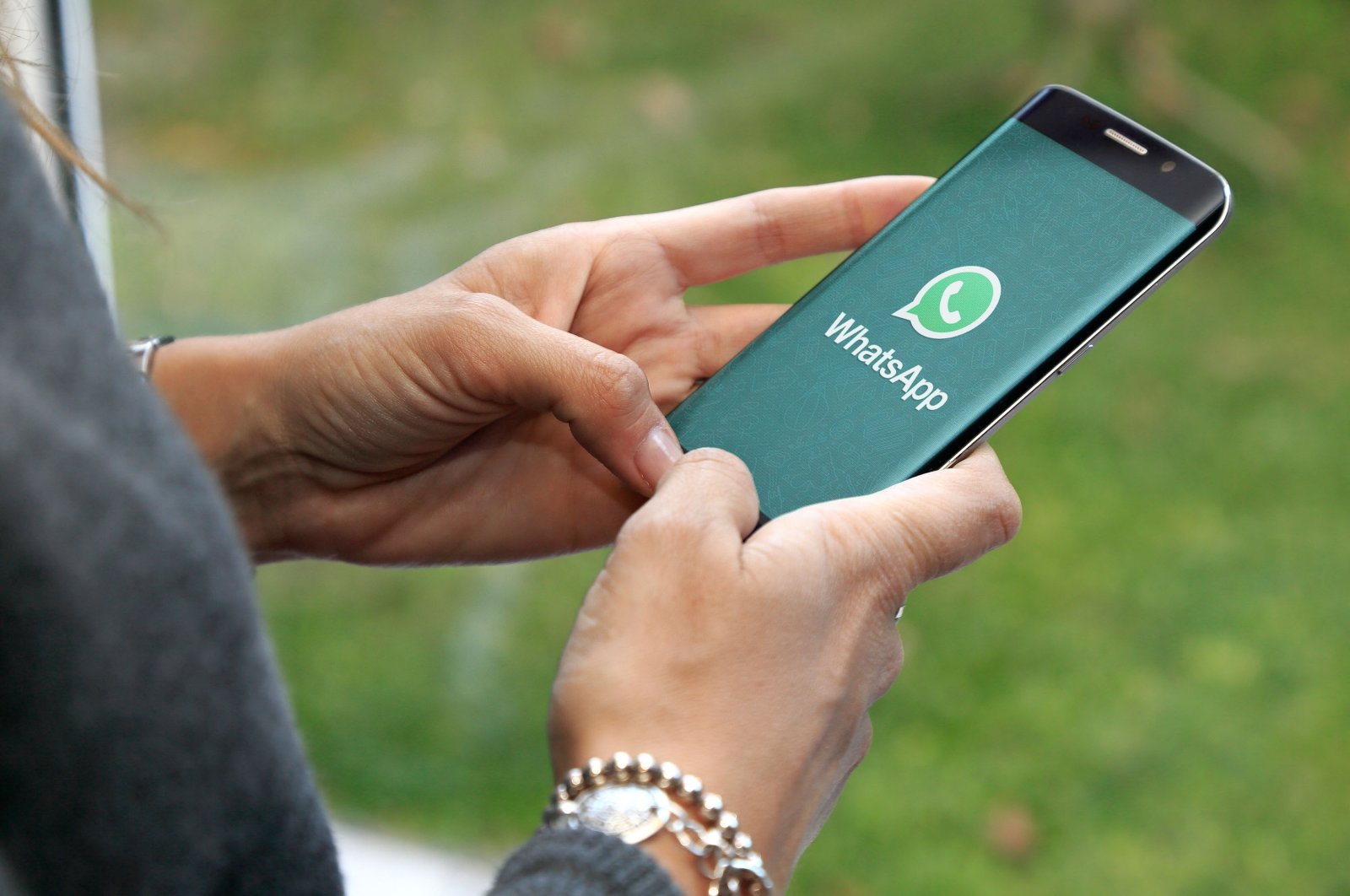 WhatsApp is warning users in a pop-up notice that they need to accept the new updates to continue using WhatsApp or delete their accounts. (Shutterstock Photo)
by DAILY SABAH Jan 10, 2021 1:38 pm
Edited By Ayşe Betül Bal
RECOMMENDED

Hashtags like "#WhatsAppSiliyoruz" ("DeletingWhatsapp") are now the most trending topics on social media channels, mainly on Twitter, across Turkey as widespread criticism regarding the messaging app's new controversial personal data policy is growing. People are also rapidly switching to alternatives, including a domestic messaging app.

The hashtag #WhatsAppSiliyoruz rose to top place among Twitter trend topics in Turkey on Sunday. The names of the applications, including Telegram, that many users recommend as an alternative to WhatsApp were also among the trending topics.

The hashtag and the move to switch were also backed by prominent names.

Among them, Turkish drone magnate Baykar's Chief Technology Officer (CTO) Selçuk Bayraktar said in a Twitter statement late Saturday that he left WhatsApp due to the new data policy.

With the "DeletingWhatsApp" tag, Bayraktar said: "I am leaving Whatsapp because of the new data policy it has put into practice."

He said that the messaging apps he uses are BiP, a local messaging and video chat app, along with Signal and Telegram since they are based on "open-source software."

"We have to protect our digital data. Whatever foreign apps have to offer are implemented much better by local apps. We are hereby inviting our citizens to use locally developed apps," he said.

In addition, all civil servants were also encouraged to use local apps, a guideline published by the Presidency has shown.

"Confidential data should not be shared over mobile software other than locally developed apps authorized for encrypted communication," the guideline read.

On the other hand, Whatsapp groups used for governmental announcements have started moving over to BiP. The Turkish Presidency's Directorate of Communications will use BiP to release statements for journalists in these groups, Anadolu Agency (AA) said.

The communication application most recently announced that it updated its rules regarding the personal information of its users and that the users would have to agree to let Facebook and its subsidiaries collect WhatsApp data that includes users' phone numbers, contacts' phone numbers, locations and more.

According to the rules updated in line with the strategy of Facebook founder Mark Zuckerberg to create a giant commercial communication network, even though the private conversations between users would not be shared with Facebook companies, commercial information will be included in the shared data.

The company is warning users in a pop-up notice that they "need to accept these updates to continue using WhatsApp" – or delete their accounts.

The users must accept the changes or see their access to the service cut off starting Feb. 8.

Facebook, which owns WhatsApp, said European and United Kingdom users would not see the same data-sharing changes, although they will need to accept new terms.

The alternatives to WhatsApp mainly consist of BiP, developed by one of Turkey's leading GSM operators, Turkcell, Signal and Telegram.

In a statement Friday, the operator said BiP was downloaded by 100,000 people on Jan. 7 alone. The app is being used by millions across 192 countries.

Telegram Messenger was again the most downloaded messaging application in Android's Play Store. While WhatsApp fell to second place in the Play Store, it was followed by the local application BiP.

BiP offers many features such as HD voice, video calling and instant translation in more than 100 languages. It has over 10 million active users per month. About 140 billion messages were sent over BiP in 2020, and the total number of calls made in the application reached 2.5 billion minutes.

He reiterated that Facebook as a company is accused of directly influencing the 2016 presidential election in the United States that resulted in Donald Trump's victory. "The company's CEO is accused of sharing Facebook data with a third party and is on trial on this matter," Karaoğlan said, noting that: "When we look at it from this window, we all know how important personal data is."

Though WhatsApp emphasizes that the data is end-to-end encrypted, "unfortunately this does not change the fact that data is stored. In other words, all our data is stored on the company's main machine with an algorithm. Now, the contract, which requires the confirmation that this algorithm will be shared with Facebook, actually means that a serious data transfer can be used for any subject."

He stressed that WhatsApp is actually an application that can carry out serious data mining.

"The groups in which we communicate, the messages we transmit, the pictures, videos, the comments we make, the answers we give, the emojis we use, all of them can reveal our habits to an algorithm, while at the same time creating serious data about our personality."

The exception of the European Union and the U.K. regarding the data-sharing has been welcomed by some as a victory for EU privacy regulators, according to the BBC.

While Facebook and therefore WhatsApp does not impose the same contract on EU members by taking into account the personal data legislation in the bloc countries, it does not abide by similar legal regulations in Turkey. In accordance with the country's new social media law, social media platforms such as Facebook are required to appoint at least one representative in Turkey to ensure the company can be held accountable in the country. The company has not yet appointed a representative.

According to the law on the protection of personal data, explicit consent is necessary for the processing of such data. However, the consent given to WhatsApp is not legally explicit since it is required on the condition of using the application.

Yet again, data such as political opinion, criminal conviction, or ethnic origin are "private personal data" within the scope of the law on the protection of the personal data, and it is obligatory to obtain separate consent for each. Consent given at once for all of these is not accepted as explicit consent in accordance with the law in Turkey.