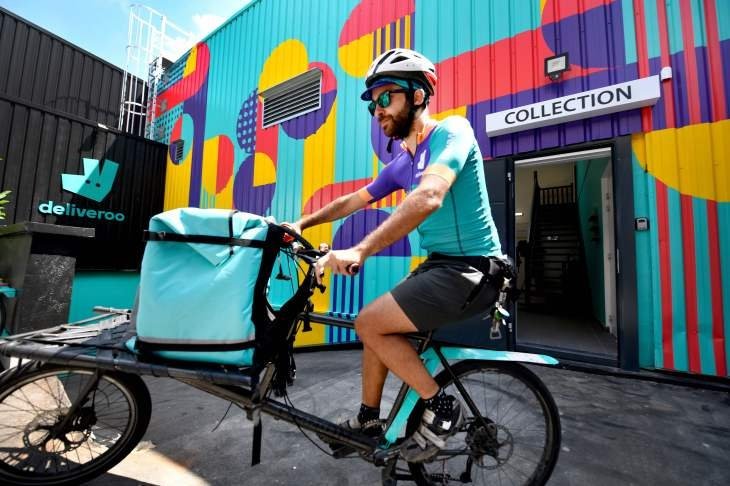 A biker working for the Food delivery service Deliveroo cycles off to deliver an order in Saint-Ouen, outside Paris, July 3, 2018. (AFP Photo)
by French Press Agency - AFP Mar 22, 2021 11:46 am
RECOMMENDED

Meal delivery app Deliveroo is aiming for a valuation of up to 8.8 billion pounds ($12 billion) when it shortly launches on the London stock market, the company said Monday.

It comes as the Amazon-backed British company, in line with other home-delivery firms, said it had seen demand soar in the past year amid coronavirus lockdowns.

The big listing, expected in April, is seen as a major boost to London's financial sector which has been roiled by Brexit.

Eight-year-old Deliveroo's market capitalization on the listing is set to be between 7.6 billion pounds and 8.8 billion pounds, it said in a statement.

"We are proud to be listing in London, the city where Deliveroo started," company founder and CEO Will Shu said in a statement.

"Becoming a public company will enable us to continue to invest in innovation, developing new tech tools to support restaurants and grocers, providing riders with more work and extending choice for consumers," he added.

The offer price range has been set at between 3.9 pounds and 4.6 pounds per share, Deliveroo said.

It will sell around 1 billion pounds worth of new shares, while current stakeholders plan to divest parts of their stock.

The listing update was published alongside news that Deliveroo's app transactions ballooned by 121% in the first two months of the year compared with January-February 2020.

"We have seen a strong start to 2021 and we are only at the start of an exciting journey in a large, fast-growing online food delivery market, with a huge opportunity ahead," added Shu.

Deliveroo earlier this month announced that it made an underlying loss of 223.7 million pounds in 2020.

That was despite the value of transactions rocketing 64% to 4.1 billion pounds.

Since its London launch in 2013, Deliveroo has expanded into mainland Europe, Asia, Australia and the Middle East.

Last year, more than 6 million people ordered food and drink every month from its app via 115,000 cafes, restaurants and stores.

However, its business model has come under scrutiny, including in Britain, France and Spain, as its freelance delivery riders complain about working conditions, reflecting wider concerns over their rights in the gig economy.

Britain's antitrust regulator last year approved Amazon's 16% investment in Deliveroo after an in-depth probe concluded it would not harm competition.

Deliveroo has said that some 50 million pounds of its shares will be made available for customers, with delivery riders and restaurant partners also able to participate.