Global investor appetite continues to fade – but not in Turkey 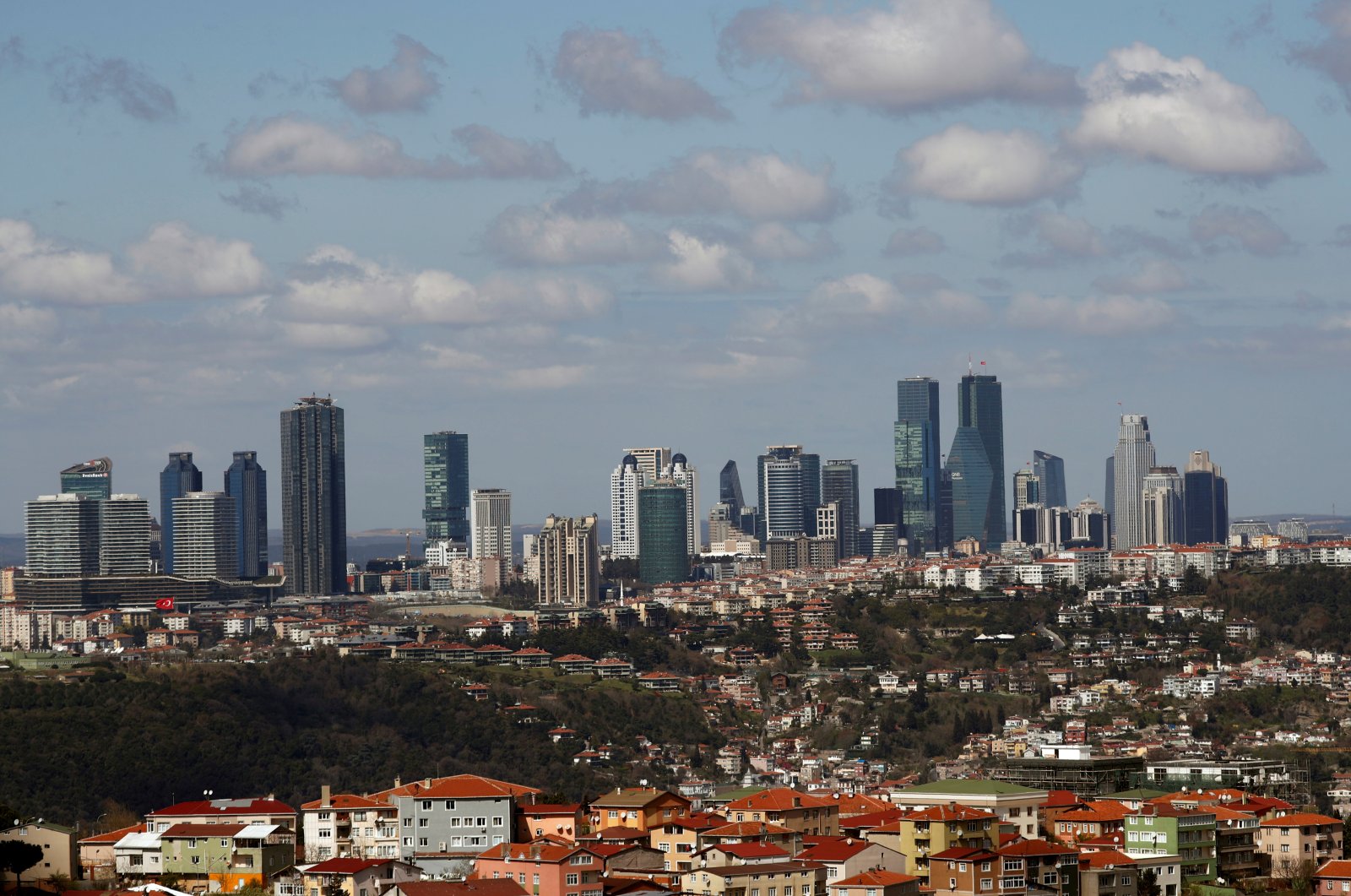 Skyscrapers are seen in the business and financial district of Levent, which comprises leading banks' and companies' headquarters, in Istanbul, Turkey, March 29, 2019. (Reuters Photo)
by Timur Sırt Aug 05, 2022 2:51 pm

The number of funding deals for technology startups around the world plunged some 23% in the April-June period, compared to the previous three months, with preferences and the tumble in the cryptocurrency markets among the potential reasons behind the drop

The slowdown in the global startup ecosystem continued in the second three months of this year on the back of developments that have dampened investment appetite.

As deal activity around the world slowed, funding declined for a second straight three-month period and dropped more than 23% quarter-over-quarter, CB Insights said in its “State of Venture Q2’22 Report Preview.” The number of deals fell some 1.4% in the first quarter.

Global venture funding saw $108.5 billion raised across 7,651 deals last quarter – marking the biggest quarterly percentage drop in deals (and the second-largest drop in funding) in a decade, the company said, citing data for the second quarter through June 23.

Yet, funding and deal totals remain above levels last seen in 2020, it added.

Preferences and the tumble in the cryptocurrency markets are said to be among the reasons behind the drop.

In contrast, the number of investments in Turkey hit an all-time high in the first three months, according to data from startup monitor startups.watch. Investment rounds from January through March reached $1.3 billion, while the data for the following three months is due to be announced on July 19.

Investors are behaving timidly in 2022. They are not only writing fewer checks but also smaller checks.

The total amount of capital pouring into startups for the second quarter through June 23 dropped around 27% compared to the previous three months, Bloomberg reported, citing CB Insights data.

The figures are most likely to change taking into account the remaining days, yet the decline seems to be greater than the 19% CB Insights had predicted around a month ago.

Late-stage companies are being particularly hit hard, as funding in Series D rounds or beyond was down 43% in the second quarter.

At each stage, the number of initial financing deals for startups is falling. This decline also reflects troubles experienced by initiatives in later rounds such as fast retail delivery pioneer Getir. It was a significant advantage that Getir completed the tour without any problems.

Venture firms such as Sequoia Capital and Lightspeed Venture were among those who warned their portfolio companies last month to get ready for a significant reduction in money flows, which had been surging for a decade.

Sequoia’s investors argued that a drawn-out recession could be ahead. Reviews, in general, indicate that the bright and sunny days are over.

The technology investment environment has changed radically in recent months. After a brief period of uncertainty at the beginning of the COVID-19 pandemic, startup investment activity shifted upward, fueled by a new remote world that needed to connect digitally, rather than in person.

This frenzy led to unprecedented levels of money flowing into newly formed companies in 2021. By the beginning of 2022, so many companies were emerging at valuations of $1 billion or more that a new “unicorn” company was minted about twice a day. However, over the past three months, the number of deals and the total funds raised have fallen to their lowest levels since the end of 2020.

Swipeline, a Turkish Instagram-focused media startup, has raised $250,000 at a valuation of around $3 million in the bridge financing round.

Founded by Erdem Şentunalı and Umut Yaka, the initiative, which started broadcasting with podcast series about four years ago, made a name for itself with Instagram-focused 15-second video news.

A bridge tour is a round of financing that tides a company over until its next larger round of funding.

Addressing many different topics ranging from financial reports to current trends in the technology world with the content it produces, Swipeline attracts around 800,000 people every month.

It continues its work with a team of 10 people with the goal of making it a daily habit to consume news content from Instagram.

Having made its name with its venture ecosystem and technology-oriented news, Swipeline has also started broadcasting in English.

“We have grown fivefold in the last year with our news content and original format content (podcasts, video series, insight and report) created with the '15 Seconds Rule,' where we bring people to information in a maximum of 15 seconds,” Şentunalı and Yaka said.

“At the moment, we are continuing to grow by 30% every month. With the global beta account that we launched at the beginning of the year, we started reaching 50,000 people a month by publishing in English and sharing only news content. During this six-month beta period, we found that our 15 Seconds Rule also corresponds globally. We will start a more comprehensive broadcasting life globally by bringing our original format content alongside our news content. We will step on the gas to increase our followers and generate revenue in foreign currency,” they noted.

Teknopark Istanbul is inviting students and graduate entrepreneurs to apply to its Cube Incubation and come up with environment-focused projects that would grant them financial support.

Students from relative departments from all universities and graduates are eligible to apply to the BIGG Cube Incubation Program of Cube Incubation, an incubation center of Teknopark Istanbul.

Candidates with the best green transformation and green growth-oriented innovative business ideas will be provided grant support of up to TL 450,000 ($26,000) from the Scientific and Technological Research Council of Turkey (TÜBITAK) for environmental projects

Cube Incubation has been producing solutions for the needs of the entrepreneurship ecosystem since the day it started operating, Teknopark Istanbul General Manager Bilal Topçu said.

“Within the scope of the infrastructure it provides to entrepreneurs and the support it offers, Cube Incubation, one of the most qualified incubation centers in Turkey, is waiting for business ideas that will contribute to the green transformation of the Turkish economy and industry with the BIGG Green Growth program,” Topçu said.

They can also benefit from the patent support through the Teknopark Istanbul Technology Transfer Office (connectto), he added.

Istanbul Commerce University and Yeditepe University are also involved in the project, run by the TÜBITAK 1512 Entrepreneurship Support Program as an implementing organization.

The project aims to provide support such as mentoring, benefiting from cooperation networks and preparing a business plan. Innovation-oriented business ideas that can be converted into commercial products and services with validated value include those related to climate change, environment and biodiversity, circular and clean economy, clean, accessible and safe energy supply, green and sustainable agriculture and sustainable smart transportation.

The applications for the program will be accepted until July 29.

Yaay, a Turkish social media platform implemented by AppYap, continues to offer different experiences to its users with new features that are being developed.

The application developer AppYap is one of the investments made within the scope of Türk Telekom Ventures.

Yaay has become the first social media platform in the world where users can convert their content into nonfungible tokens (NFTs).

A type of digital asset, NFTs exploded in popularity last year, with NFT artworks selling for millions of dollars. The asset exists on a blockchain, a record of transactions kept on networked computers. The blockchain serves as a public ledger, allowing anyone to verify the NFT’s authenticity and who owns it.

So, unlike most digital items that can be endlessly reproduced, each NFT has a unique digital signature, meaning it is one of a kind.

Yaay’s “NFT Studio” feature enables users to convert their posts into NFTs and sell them around the world. The NFTs created by users cannot be deleted and all data will always be viewable via Yaay to the people who will purchase them. In addition, the NFTs created in Yaay will be able to exist not only as a visual but also as a unique digital icon with all post information and detailed metadata.

This competence, which will attract the attention of social media content producers, in particular, will create an area of opportunity that is not available on other platforms.

With Yaay NFT Studio, content producers will be able to generate income not only through brand partnerships and advertising revenues but also with the value that the content they produce will directly create.

Users of Yaay, which combines many different features under the same roof with options such as agenda and news tracking, access to accurate information and badge application, will thus turn their content into unchangeable and sellable digital assets.

All kinds of content, except for those posts that include links, surveys and citations, can be converted into NFTs.