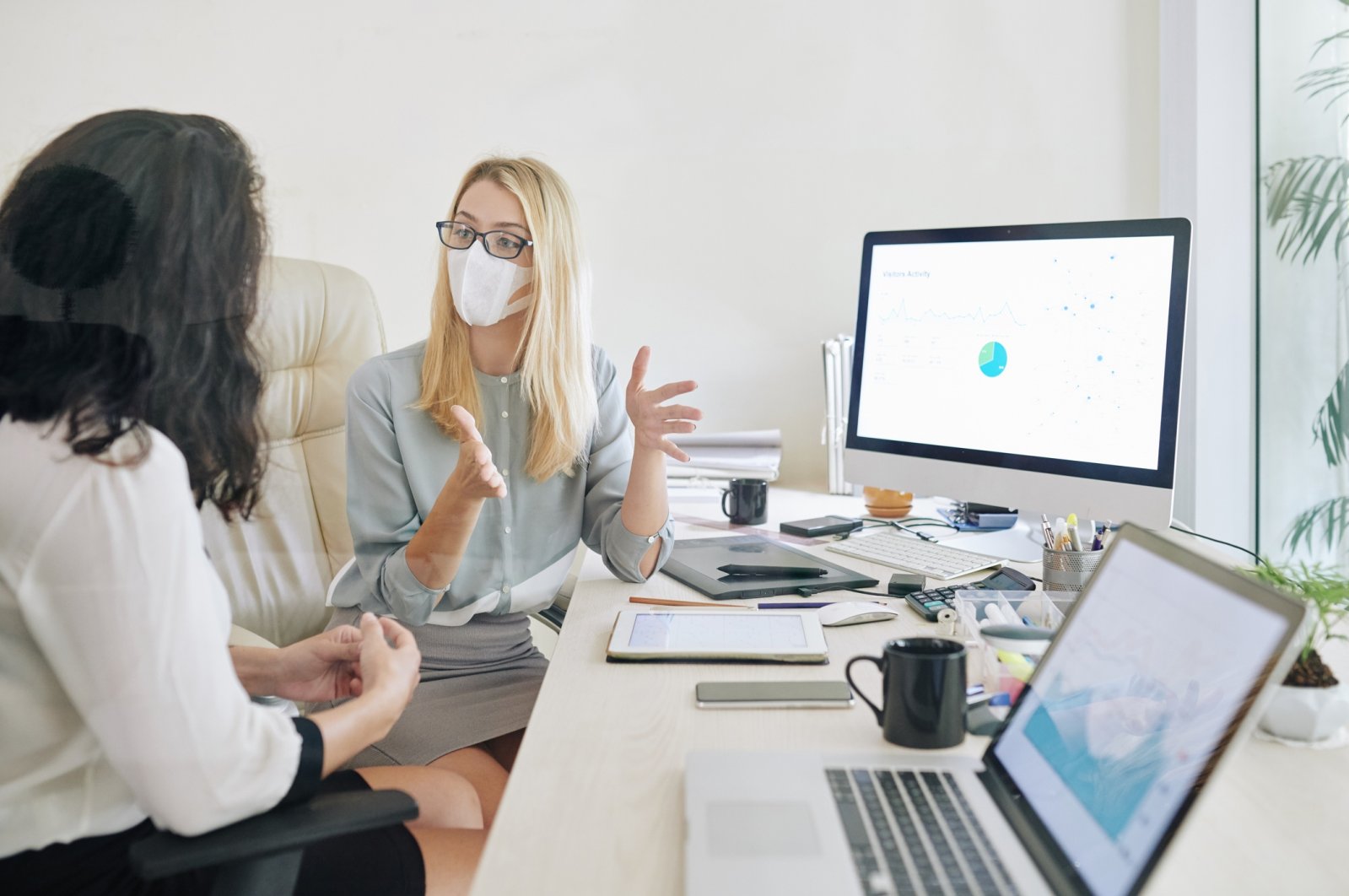 Startups using new healthy materials and AI as well as startups that develop smart home and production technology solutions have been the stars of the pandemic period. (iStock Photo)
by Timur Sırt Sep 11, 2020 3:11 pm

Consumers who spend more time at home, pay more attention to their health and appearance and turn toward savings have made new generation startups more valuable than ever.

One of the largest conglomerates in Turkey, Zorlu Holding, which has carried out exemplary projects on in-house ventures and the behavior of corporate venture capital funds, and Vestel Ventures, its company specializing in venture capital, pursue talented ventures.

The DCP team consists of investment professionals who have been working on technology investments since 2007, have experience in close cooperation with universities and growing early-stage start-ups, and have international connections to technical experts and other investors with a command of the expectations of researchers and industrialists.

Vestel Ventures General Manager Metin Salt, who likened the relationship between institutions and startups to the solar system, said that innovation might be optional for organizations, but it is a necessity for startups.

“Actually, I liken big institutions to the sun. Startups will not be very close to institutions, but they will not be too far away either,” he continued. “They will feed on the ecosystem created by the large group, but they will not try to swallow it. At Zorlu Group, we have serious experience with Vestel Ventures in open innovation. Today, startups are growing 10 times faster than the average company. On the other hand, we have focused on how we can bring this understanding inside while entering in-house entrepreneurship.”

Salt said they had brought in 17 startups so far. “With this experience, we now want to take startups from within with Parlak Bi' Fikir (A Bright Idea). Everyone who participated in the process won. We, the managers, are included in the winners,” he further stressed.

“Everyone learned a lot during the process, we learned to deal with so many issues, problems, difficulties. But learning is a continuous process that never ends. All of our friends who participated in the process will share their experiences and learning with new teams as a Parlak Bi 'Fikir mentor in the next cycle. They will continue to learn and develop with new teams. With this learning, we are working with our HR Group Presidency on a new regulation that will affect the performance scoring of the teams and their managers participating in this process,” he noted.

Salt also pointed to the startups they were interested in. “We are interested in the internet of things, energy, new sustainable materials, corporate software and solutions, and social solutions. Even emerging startups themselves have sparked new ideas,” he said.

“I think of them as grandchildren. It turned out to be a great solution for energy pricing from within our energy startup. In other words, new startups should strengthen our access to the market and people. The priority will be the contribution of the group to the startup. We must develop the innovation muscle of the group and be open to trials in order to enter new sectors,” he added.

More technology is needed for a new generation of healthy materials. This need has increased more during the pandemic period.

British company Croda, a world giant in the high-performance materials industry, has invested 1.5 million pounds ($1.9 million) in Entekno, which focuses on the development of a new generation of particle technology that will deliver superior protection benefits to the sun care and personal care markets.

The company is included in the portfolio of DCP, Turkey’s first Deep-Tech fund that invested in technology-oriented new ventures.

With this new partnership, Croda will play an important role in the sale of the material developed by the new MicNo particle technology improved by Entekno, which was established in central Eskişehir province with the slogan "Respect the World," to leading cosmetic brands.

Entekno will also create unique products for a sustainable future and the world as one of Croda's "Innovation and New Product Development Centers."

No residue on the skin

Sunscreens developed by Entekno with the latest technology are providing higher protection with less active materials than other sunscreens with effective UV protection while preventing residue on the skin with transparent and environmentally friendly features.

MicNo particle technology, which is produced at low cost and provides safer UV protection, affects the creation of safe powders that appear transparent under the sun and do not penetrate the skin.

The sunscreen, which can be used on sensitive skin and babies, is a new generation and unique invention, produced with superior technology.

Preferring to invest in startups with deep technology experience and knowledge, DCP started to manage the first fund in 2015, reaching 37 million euros (TL 327.59 million). Some 18 investments were made in various fields from the first fund. With the new fund of 35 million euros, which will be operational at the end of September, it will continue to increase the number of investments.

Haluk Zontul, the founding partner of DCP, stated that they aimed to reach a size of 60 million euros by investing in 15-20 startups before the last closing of the fund.

“As the DCP team, we always aim to open up the new startups we have implemented with our ability to find Turkish companies that can compete worldwide in deep technology, with the support of new investors who join us,” Zontul said.

“We are pleased that the Entekno company in Eskişehir received an international investment from an important player in the high-performance material industry such as Croda, especially during the days when the whole world was experiencing a serious economic change and the importance of deep technology increased once again,” he noted.

Entekno, which operated in a modest office and laboratory in the technology development zone at the time the DCP invested in 2017, is now located in a large factory building in the Eskişehir Organized Industrial Zone, Zontul noted.

“Thanks to a qualified team, Entekno, which enlarged its organization and introduced qualified products to the market with its R&D (research and development) studies, has attracted the attention of various international companies, while Croda – one of the biggest of these – became a new partner with this investment,” he added.

“We are pleased that with our work in the environmentally friendly and innovative high-tech materials sector, following a new approach to new generation cosmetics and personal care we created with MicNo particle technology attracted the attention of Croda, which has become our partner,” Entekno Founder Suvacı said.

“Another fact that makes us even happier is that Entekno's and Croda's values and principles are in perfect harmony with each other and the main purpose of both organizations is that we are committed to developing scientifically based material solutions that will make life easier and respect the world and people,” Suvacı added.

He noted that the fact that new generation cosmetics and sunscreen materials will be supplied to world-renowned cosmetic brands through Croda makes them proud both on behalf of the country and their team.

“In 2017, at the initiative of DCP, we expanded our factory and opened up to new technology production areas, enabling us to create raw materials that are new generation – the first example of which MicNo technology is used as the only active, safe, environmentally friendly and highly sun-protective raw materials. With this partnership, our superior innovation capabilities and breakthroughs will support Croda's intensive marketing and sales force. I would like to personally thank all of our stakeholders, especially our managing partner Dr. Oktay Uysal, the Entekno team and the DCP for their contribution to the formation of this cooperation,” he said.

In the "Next Generation Entrepreneurship Talks" panel, organized for the third time by Turkey's leading information and communication technologies company Türk Telekom’s PILOT venture acceleration program, the future of artificial intelligence technologies was discussed with the managers of Tazi Ai, Vispera and Al Ethics Labs.

“Artificial intelligence is unquestionably of rising value both today and tomorrow,” Barış Karakullukçu, deputy general manager of strategy, planning and digital for Türk Telekom, said at the PILOT Infoday.

“At Türk Telekom, there are important studies we have done in this field. Together with our group of companies, it is one of our primary goals to carry Turkey into the future and to represent it on global platforms by developing artificial intelligence-oriented domestic and national technologies,” Karakullukçu noted.

Underlining that they had provided a total of over TL 4 million ($335,000) in cash support to 65 startups that have graduated from PILOT so far, Karakullukçu stated that their support for technology startups will continue at full speed.

The top 10 among more than 100 competing startups have been selected at the Next Game Startup, the first game entrepreneurship competition held this year in the western province of Izmir as part of the INTEL ESL Gaming Fest 2020 on Sept. 5.

In the event, where finalists were invited to showcase their games, judges based their verdicts on team structure, exemplary product, valuation and requirements in the field of financial and marketing. Team Untested, which developed the game Chamber Bound, won the first prize, followed by Pyramid Games in second place and 8art Game Studio awarded in third.

The game industry is rapidly growing worldwide. Next Game Startup, the game entrepreneurship competition organized to support the startups emerging from Turkey and support the goal of exporting software of $10 billion in 2023, has been entitled to receive a total of TL 1 million in funding provided by oFON, while winners can also expect to see a cash prize of TL 50,000 from the Izmir Metropolitan Municipality.

In addition, the winners received TL 200,000 in project support with the services provided by INTEL, ESL, Izmir Metropolitan Municipality, IZFAŞ, Monster Notebook, Teknosa, Hepsiburada and other business partners of Next Game Startup.