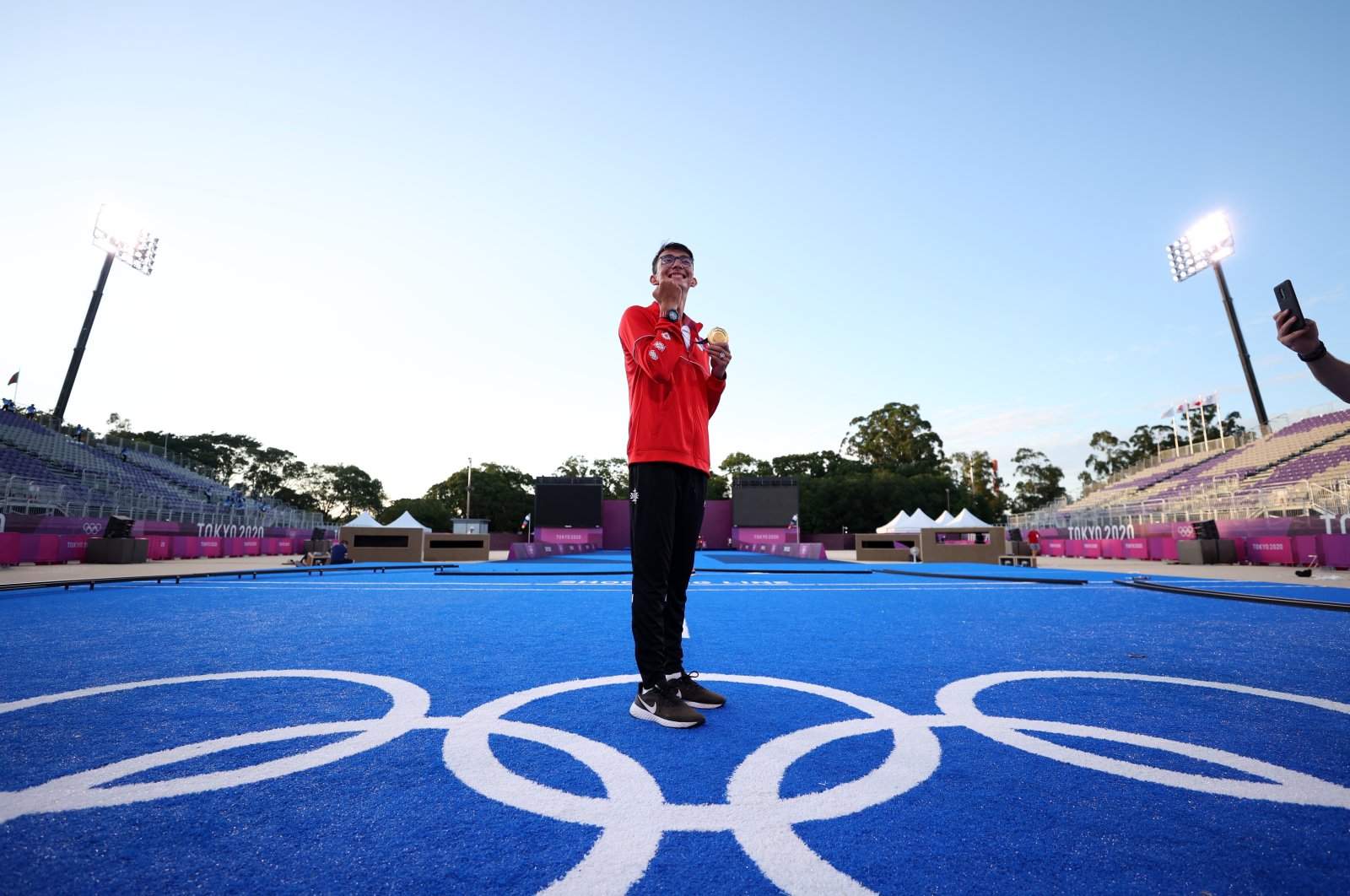 In addition to long and strenuous workouts, Turkey’s golden archer Mete Gazoz stresses the importance of technology that has helped him observe each training session of the national archery team as well as monitor physical performance

Behind every Olympic medal lies great teamwork, hours and hours of workouts, and one other important factor: technology. Turkey’s gold medalist, Mete Gazoz, considers these factors very important to take part in the Games.

The 22-year-old national archer, who won the individual men’s title at the recent 2020 Tokyo Olympics, addressed this week’s Ventures60 event, a meeting that brings together entrepreneurs and investors.

The entire shooting throughout the training of the national archer team is being observed with high-resolution cameras, according to Gazoz, who also said the technology helps monitor instant changes in the physical performance of athletes, for instance, their heart rhythm.

Gazoz’s gold was a Turkish first in archery, a sport where fierce concentration is the watchword, and South Koreans usually monopolize the titles.

“The whole national team training is recorded with high-res cameras. Each angle as we stretch and release the bow, as well as the shape our fingers take, is monitored every split second with high-res cameras capable of super slow motion,” he said, explaining the teamwork behind their success and the technologies that are being used.

The cameras that are capable of shooting 2,000 frames per second help analyze the errors made very easily. In their case, Gazoz specified, for example, they were observing if all the fingers open instantly when releasing the bow.

“In addition, our heart rate is monitored throughout the entire training session. The heart rhythm should not be below or above a certain value,” he noted.

Systematic and long training help keep the heart rhythm under control, according to Gazoz, further elaborating on some moments from his Tokyo Olympics final.

“Being too calm is also not a good thing,” Gazoz said. “My average heart rate hovers between 120 and 150. If my heart rate is in this range, my chance of hitting the 10-ring increases.”

The number 10 Gazoz referred to is certainly the most important in archery – it is what everyone on the field aims for 70 meters (230 feet) downrange.

“My heartbeat decimated from 130 to 145 during my final match. In fact, for me to do so, this was constantly monitored in training throughout the year. My opponent’s heart rate went up to as much as 170,” he explained.

It was for the first time during the Tokyo Olympic Games that television viewers got the chance to follow the athletes’ heart rhythms on-screen during their shootings, according to Gazoz.

“The national team medical team did not leave anything to luck by following our every moment with the technologies they used.”

Gazoz has been tying the Olympic success to hard work and a lot of sacrifices made over the years.

“To win this gold medal, I worked unbelievably hard for the last five years. There will be another Olympics in three year’s time and this time we want to win the gold medal as a team. Maybe we can win not one but three or four medals,” he said on his return from the Games.

Throughout his camp period, the Olympic champion said he prepares by training hard for nine to 10 hours each day.

Speaking of the self-sacrifice an Olympic champion athlete has to make, Gazoz said: “You cannot endure the high training duration without passion, without love. Me, I want to do more every day. You should never get tired of it.”

“In fact, such hardworking athletes are in the position where they are separated from their families. Just my luck, I was more fortunate since my family was also involved in the sport. I have not been far from my loved ones. I have been training at this pace for over 10 years.”

The 22-year-old was “born into” the sport as the son of a national champion archer, Metin Gazoz.

Tiny details can determine an Olympic or World Champion athlete. Even athletes who receive medals, not just gold, do so with very small differences.

Gazoz is separated from his opponents by the pace of training, teamwork and the sacrifices he makes. Even the heart rate, the shape the fingers take and being kept in check throughout long workouts, reveal that greatness lies in the small details.

It is also not an easy task to come up with billion-dollar initiatives, namely unicorns. The federation prepares the economy for sustainable and continuous success. It is important to prepare the infrastructure that focuses on success, ensuring the formation of the right team.

Twozero Ventures, a Turkish venture capital, has been focusing on healthy life and sports technology initiatives during the coronavirus pandemic period.

Arslan said all initiatives should aim to conduct their business at a global level.

Speaking on the details they notice before investing, Arslan said: “We cannot always achieve the target 100%. But we think all initiatives should have a goal of doing global business.”

“Entrepreneurs learn a lot from their customers, from their users. Every startup can make mistakes, but by learning from mistakes, it can shape the product and service correctly.”

Arslan said an important part of their investments has started pouring into sports and healthy life technology initiatives.

“People have started to pay more attention to the healthy life culture during the pandemic,” he added.

Football clubs have missed out on billions of dollars in revenue due to the impact of the COVID-19 pandemic.

The outbreak-induced measures forced most of the clubs to play a majority of their games without spectators, a cornerstone of a club’s business model that also helps drive other revenue-generating activities.

All this also prevented the clubs from spending massive amounts on transfers as was the case prior to the pandemic. Spending has been down; young players are in fashion and free transfers have increased in this transfer window.

“Families are more conscious now. Footballers want to find a mentor to support them. At this point, we are trying to support amateur athletes.”

Aydın said they had important contributions to the democratization of football.

“The number of clubs like Altınordu must increase,” he said, referring to the Turkish football club that currently boasts one of the best youth development systems and facilities in the country, raising numerous players, including many Turkish national team stars.

“Every club has to make the right decision when selecting players. We provide every club with video analysis of the players’ pass percentage, continuity, and game time they get. So, clubs that use data can make more accurate choices,” Aydın explained.

Having founded Mindfulness Academy together with Nilay Aydoğan in 2015, Erhan Ali Yılmaz has introduced the concept of mindfulness to more than 30,000 people, including 5,000 corporate managers in Turkey and internationally.

In 2019, Yılmaz became one of the founders of a mobile application venture, Live Studio, by transferring his experience in education to the mission of “meeting all people with good life practices.”

Undertaking the role of content director of the Studio Live platform, he continues to give mindfulness-themed seminars at home and abroad and extends support to people to help them reach good life practices with the platform.

The venture has now embarked on an investment tour, according to its co-founder and CEO Aydoğan.

“Now we will direct future investment to global travel, brand promotion and team growth. Ensuring that our instructors reach students from different parts of the world positively affects our motivation,” Aydoğan added.