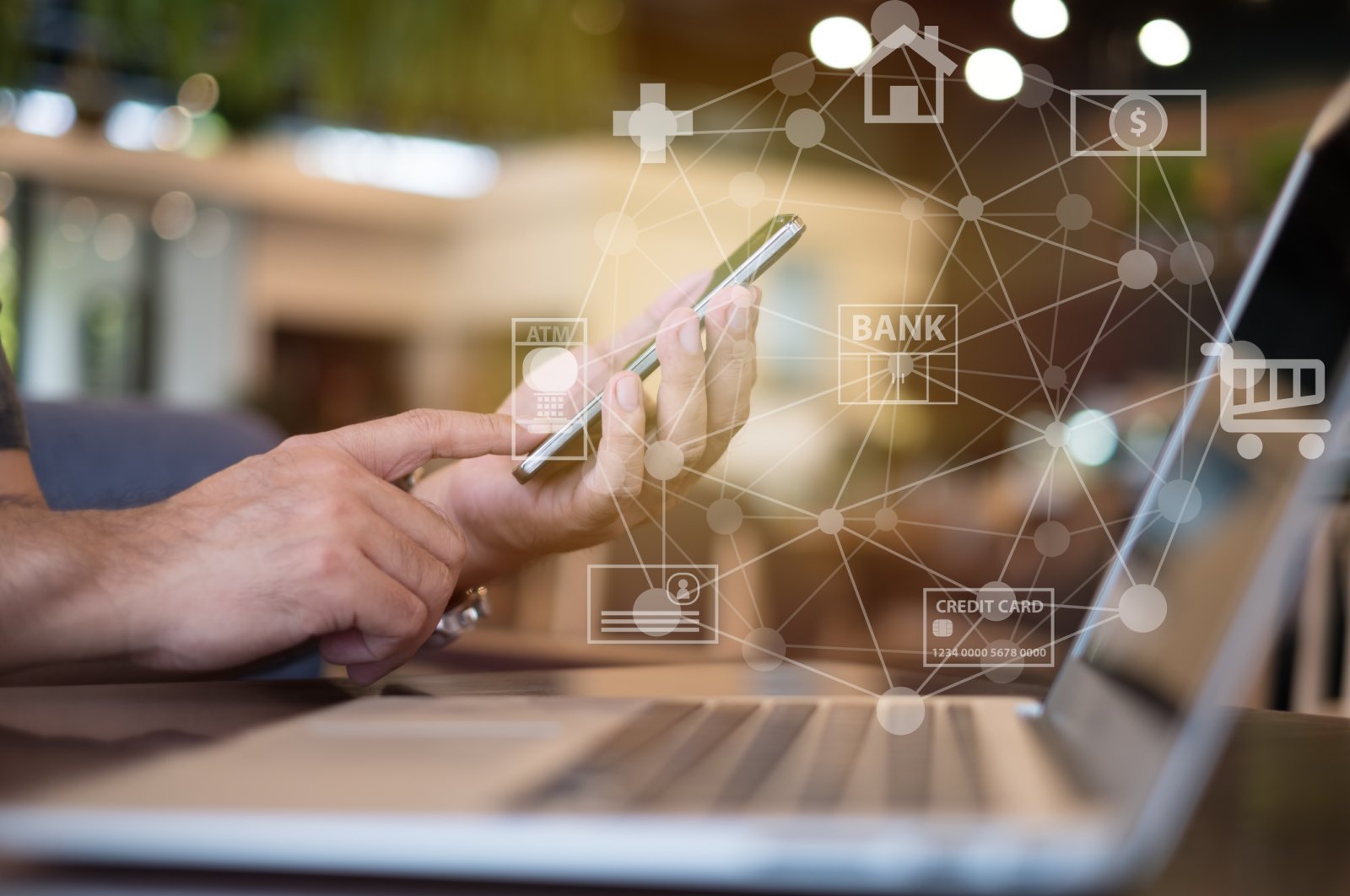 More and more users are opting for mobile-based apps to carry out their transactions while complying with social distancing guidelines. (iStock Photo)
by Timur Sırt Oct 09, 2020 3:20 pm

The average sessions in investment apps surged 88%, while payment and banking app sessions increased by 49% and 26%, respectively, during the COVID-19 pandemic, the latest report on global fintech app usage showed

As in many other areas, the pandemic has changed the habits of mobile payments. People have begun to rely more on digital payment methods developed by financial technology startups to pay at both stores and on every platform they use regularly.

During the COVID-19 outbreak, global banking app sessions have increased by an average of 49%, according to a recently released report by the global app marketing platform Adjust and app statistics provider Apptopia.

The report titled “The Mobile Finance Report 2020” compares the first half of 2019 with the first half of 2020. Projected as a global benchmark of banking, payment and investment apps, the data from Adjust and Apptopia from a cross-section of countries around the world suggest the following trends in app usage for fintech customers.

People want to use and manage their investments themselves 24 hours a day. The use of investment apps that allow users to buy and sell stocks directly from their phones is growing rapidly.

The average sessions per day in investment apps surged 88% year-on-year from January through June of this year, the report showed.

Applications offered by trading platforms such as Acorns, Gatsby and Stash are democratizing investing by making it easier and more accessible. Globally, investment apps are the second-fastest-growing vertical tracked by Adjust in 2020, beating out other hot verticals such as casual and hyper-casual games.

The rise came as more and more users are opting for mobile-based apps to carry out their transactions while complying with social distancing.

Sessions for banking and payment apps combined increased 26% on average across the countries in our survey. While all countries saw an uptick in sessions, stand-out markets by growth rates were Japan (142%), Germany (40%), Turkey (31%) and the U.S. (27%).

The “Super-apps” remain one of the top trends in mobile. Asia gave rise to the super-app via big names such as WeChat and KakaoTalk but other regions are catching on, with Revolut, for example, pursuing a "super-app" strategy.

3 countries ahead in banking app

“The impact the pandemic has had on banking and the acceleration in mobile digital services should not be underestimated,” said Paul H. Muller, co-founder and chief technology officer (CTO) of Adjust.

“While the banking industry has adapted to digital innovations for several years, COVID-19 is accelerating this change and opening the door to banking services to millions of people worldwide who do not have bank accounts or have limited bank access,” Muller noted.

Japan leads the pack for banking downloads among the countries analyzed but is also the outlier. Other advanced economies are seeing falling install numbers over the past 12 months, according to the data.

“Countries such as Turkey, Ukraine and Brazil are where banking is showing the strongest gains,” Blacker noted.

Not only have sessions and installs for finance apps increased significantly in 2020, but the amount of time that users are spending in those apps globally is also on the rise.

Adjust’s data confirms that the most significant growth for time spent in fintech apps occurred in the second quarter of 2020, when regions around the world went into lockdown.

Of the countries analyzed, Argentina grew the most in terms of time spent in-app year-over-year in 2020 – soaring 72%. This was followed by Ukraine, with 62%, and then Russia and Brazil, which both increased by approximately 50%. Japan saw a 21% jump.

Coinciding with the onset of the economic and social changes brought by pandemic, banking and payment apps saw a precipitous drop in user acquisition costs. Starting in February, effective cost per installs (eCPIs) dropped 77% by May, with banking apps still able to acquire users at a fraction of the price they were at the start of the year.

According to the report, the cost of user acquisition in the payments app segment is relatively lower compared to other business apps currently used during the COVID-19 pandemic. There are other critical factors that are driving users and app makers to jointly build a global fintech app ecosystem for the new normal in the world’s disrupted economy.

Connected devices, combined with the power of software, sensors and processors, increase the number of smart cities, smart homes and smart cars. As the number of devices connected to the internet increases, startups gain new capabilities.

The first step of the culture of doing business over data starts with the internet of things (IoT). In other words, it allows business to be conducted over data by measuring each device connected to the network.

As the pandemic accelerates digital transformation, the IoT startups attract more attention. Startups and companies that enable devices connected to the internet, and therefore to data, to increase exponentially make cars, houses and cities smarter.

In the pandemic period, IoT technology has been used more in areas such as smart health devices and tracking people with chronic health problems staying at home. Companies such as Bosch IoT sensor, Siemens IoT Analytics, Cisco, ARM IoT Cyber Security, GE Digital, Huawei, Vates, ScienceSoft, Oxagile, Style Lab IoT, HQ Software Industrial IoT and PTC have many solutions from sensors to consultancy, security and expertise in different industries. It is agreed that the pandemic created greater opportunities for the IoT.

While taking the first steps of digital transformation in business or daily life, it is imperative to better explain the culture of doing business over data. In order to talk about data and measurement on the internet, it is imperative to connect every device to the internet first. This is an important advantage if every device connected to the internet is starting to generate continuous data with precision. It is essential to have significant experience to create the produce-distribute-sell trio.

The first step of digitalization in every field from production to logistics, from retail to health, comes from the IoT technology. A company first classifies, measures and analyzes the product it produces, transports and sells over time. Without analyzing these changes correctly, it stays far from the solution.

Qubitro, supported by the eighth term of Turkey's leading information and communication technologies company Türk Telekom’s PILOT venture acceleration program, offers a high-performance cloud-based (SaaS) IoT platform that enables developers and institutions to produce smart solutions by collecting data from any device without the need for infrastructure setup and coding.

Qubitro provides its users with support for monitoring communication between devices and integration with different platforms. Institutions can also sell their own branded apps using Qubitro's application programming interfaces (APIs).