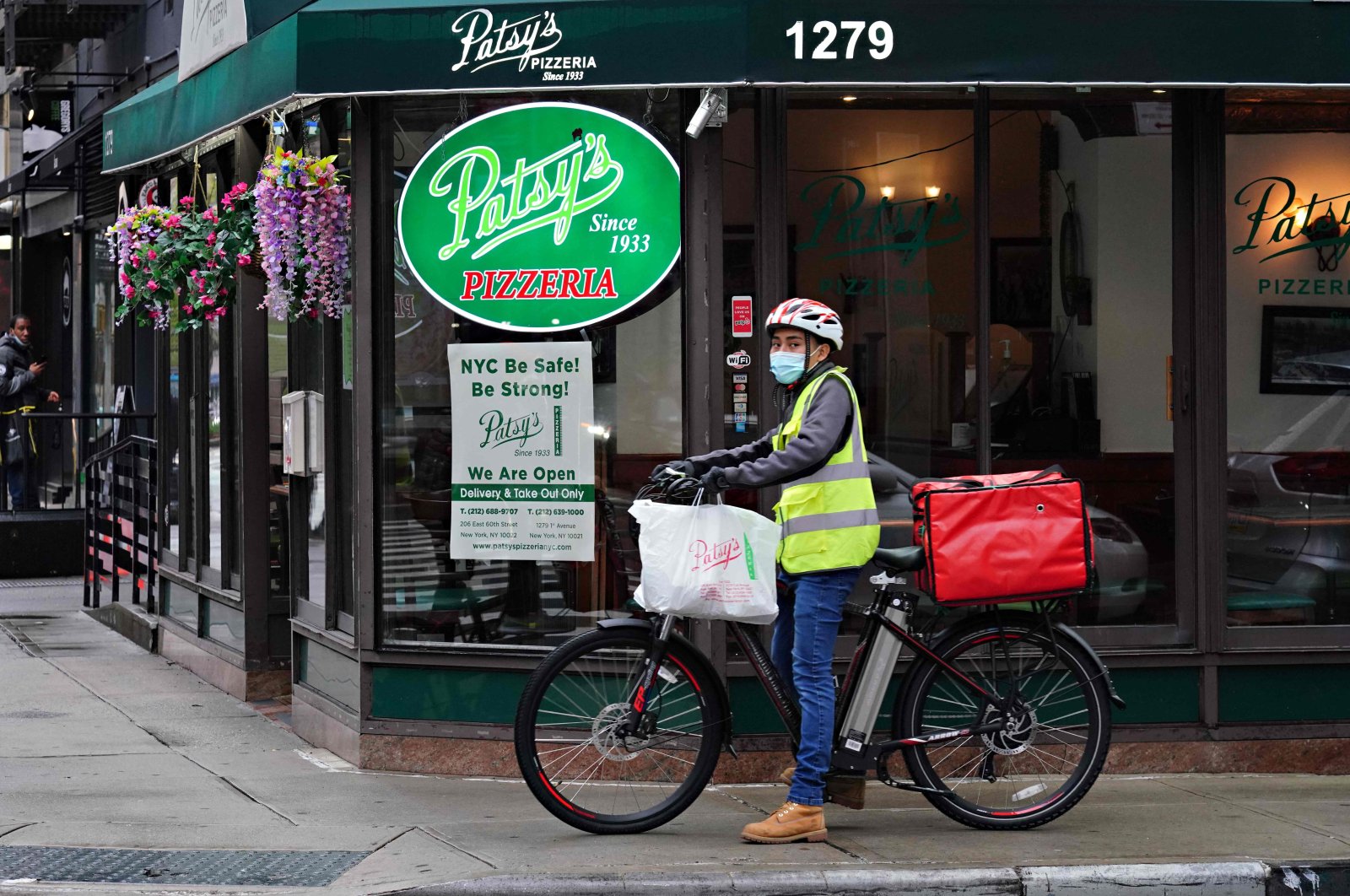 A restaurant delivery worker on his bike stops by a sign in the window of Patsy's Pizzeria which reads "NYC Be Safe! Be Strong!" during the coronavirus pandemic in New York City, U.S., April 23, 2020. (AFP Photo)
by French Press Agency - AFP Oct 10, 2021 12:52 pm
RECOMMENDED

Meal delivery services became essential during the coronavirus pandemic when millions were confined to their homes under lockdown and restaurants were shut to visitors.

But these days the platforms are increasingly finding themselves under fire, with politicians seeking to regulate the industry and restaurateurs accusing the likes of DoorDash, Grubhub and Uber Eats of freeloading. And they are looking for ways to do without them.

In just the first nine months of this year, DoorDash has likely filled over 1 billion orders, most of them in the United States, where the company is the market leader.

"When you receive 30 or 40 orders a day, you are happy. But the problem is that it does not translate into profits," Palombino told the Agence France-Presse (AFP).

Food delivery services can charge restaurants fees of up to 30% of the bill for a meal, according to their websites.

To address that problem, in August the New York city council passed a law, capping third-party delivery fees at 15%.

"Small businesses should not be pressured into accepting these fees in order to remain viable and competitive," said New York City Councilperson Francisco Moya, who initiated the bill. A similar law was passed in San Francisco in June.

Food delivery giants have challenged the laws in courts, and some analysts think they have a point.

"We believe DoorDash will have a strong legal case against the permanent fee caps," Bank of America said in a research note last month.

DoorDash, Grubhub and Uber Eats argue that the cap is unconstitutional and that restaurants are free to negotiate their commissions with delivery platforms.

The delivery giants also say they have made huge investments during the pandemic that led millions of customers who had never ordered meals online to get started.

And DoorDash says that restaurants that used its platform during the pandemic had a survival rate eight times higher than the industry average. The company also says that even before the laws were passed it already offered a 15% fee formula.

But Palombino, the pizza chain founder, is unconvinced.

"The problem is that they have become so established that there no longer is a way back," he said. "If you're not on Seamless (one of the most popular delivery services in New York), you no longer exist."

As for the 15% commission, Palombino said that a successful restaurant can "only hope" for a profit margin of 15% or 20%. "So at the end of the day, they take it all."

'The only real solution'

In court, the food delivery platforms have argued that the cap will trigger higher fees for consumers, who have been relatively spared for now.

Collin Wallace, managing director of the marketing firm ZeroStorefront and former head of innovation at Grubhub, said that so far it's the restaurants who have had to bend.

"The only way to get this resolved is going to be by the technology platforms, using the same engineering and innovation they used to get their companies to this point," Wallace said.

Some businesses are already trying to get around the all-powerful delivery apps by creating their own platforms.

One such startup, ChowNow, helps restaurants launch their own order-taking applications, so as not to have to pay any commissions at all.

Another company, LoCo, creates delivery cooperatives owned by restaurants, where they get to choose their own commissions, often half of what delivery giants charge, said LoCo founder Jon Sewell.

Sewell, himself an owner of a restaurant in Iowa, added that this arrangement also allows restaurants to keep their clients' data to themselves.

LoCo has launched franchises in Virginia, Nevada and Nebraska and is looking to expand further.

But Sewell admits that the concept is not easy to sell. "It's difficult to get the people convinced that they need to start to work as a collective." But, Sewell added, "to me, that's the only real solution."