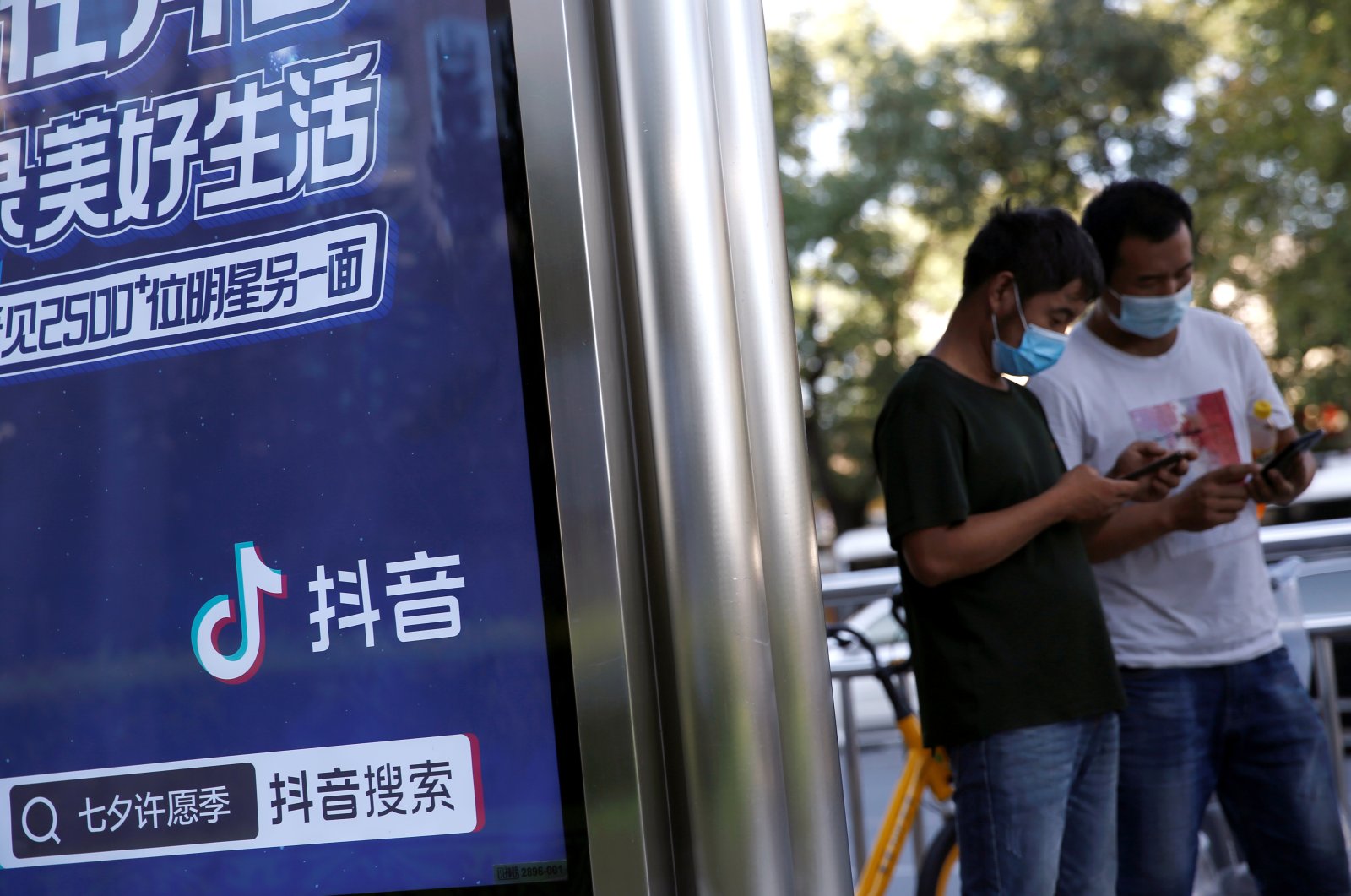 People wearing face masks during the coronavirus outbreak use smartphones next to an advertisement for TikTok at a bus stop in Beijing, China, Aug. 24, 2020. (Reuters Photo)
by French Press Agency - AFP Aug 24, 2020 6:38 pm
RECOMMENDED

Video app TikTok on Monday said it has filed a lawsuit challenging the U.S. government's crackdown on the popular Chinese-owned platform, which Washington accuses of being a national security threat.

"Today we are filing a complaint in federal court challenging the Administration's efforts to ban TikTok in the U.S.," the company said in a blog post.

TikTok argued in the suit that Trump's order was a misuse of the International Emergency Economic Powers Act because the platform – on which users share often playful short-form videos – is not "an unusual and extraordinary threat."

The executive order "has the potential to strip the rights of that community without any evidence to justify such an extreme action," the suit contended.

"We believe the administration ignored our extensive efforts to address its concerns, which we conducted fully and in good faith even as we disagreed with the concerns themselves," a statement from TikTok said.

TikTok's kaleidoscopic feeds of clips feature everything from dance routines and hair-dying tutorials to jokes about daily life and politics.

The app has been downloaded 175 million times in the U.S. and more than a billion times around the world.

The Trump administration has separately given ByteDance a deadline to divest TikTok before the app is banned in the United States.

Trump argues that TikTok could be used by China to track the locations of federal employees, build dossiers on people for blackmail and conduct corporate espionage.

The company holds firm that it has never provided any U.S. user data to the Chinese government, and Beijing has blasted Trump's crackdown as political.

The U.S. measures come ahead of Nov. 3 elections in which Trump, behind his rival Joe Biden in the polls, is campaigning hard on an increasingly strident anti-Beijing message.

"The administration failed to follow due process and act in good faith, neither providing evidence that TikTok was an actual threat, nor justification for its punitive actions," the company said.

"We believe the administration's decisions were heavily politicized, and industry experts have said the same."

"The executive order singles out people of Chinese and Chinese American ancestry and subjects them to disparate treatment on the basis of race, ethnicity, nationality, national origin and alienage," the suit argued.

The suit contends the order is illegal and so vaguely worded that it is not clear whether people using the app to message friends or run businesses will be considered lawbreakers. It also says no evidence has been shown that WeChat is a threat to the U.S.' national security.

The alliance said it is not affiliated with WeChat owner Tencent, based in China.

Trump has increasingly taken a confrontational stance on China, challenging it on trade, military and economic fronts.

Microsoft and Oracle are possible suitors for TikTok operations.

Reports have said Oracle – whose chairman, Larry Ellison, has raised millions in campaign funds for Trump – was weighing a bid for TikTok's operations in the U.S., Canada, Australia and New Zealand.

TikTok decried Trump's expressed interest in the U.S. getting a share of any sale price because of its role in making it happen.

The president said last week the eventual buyer would have to "make sure the United States is well compensated."

"The president's demands for payments have no relationship to any conceivable national security concern," TikTok said in the suit.

The measures against TikTok move away from the long-promoted American ideal of a global, open internet and could invite other countries to follow suit, analysts told Agence France-Presse (AFP) previously.

"It's really an attempt to fragment the internet and the global information society along U.S. and Chinese lines, and shut China out of the information economy," said Milton Mueller, a Georgia Tech professor and founder of the Internet Governance Project.