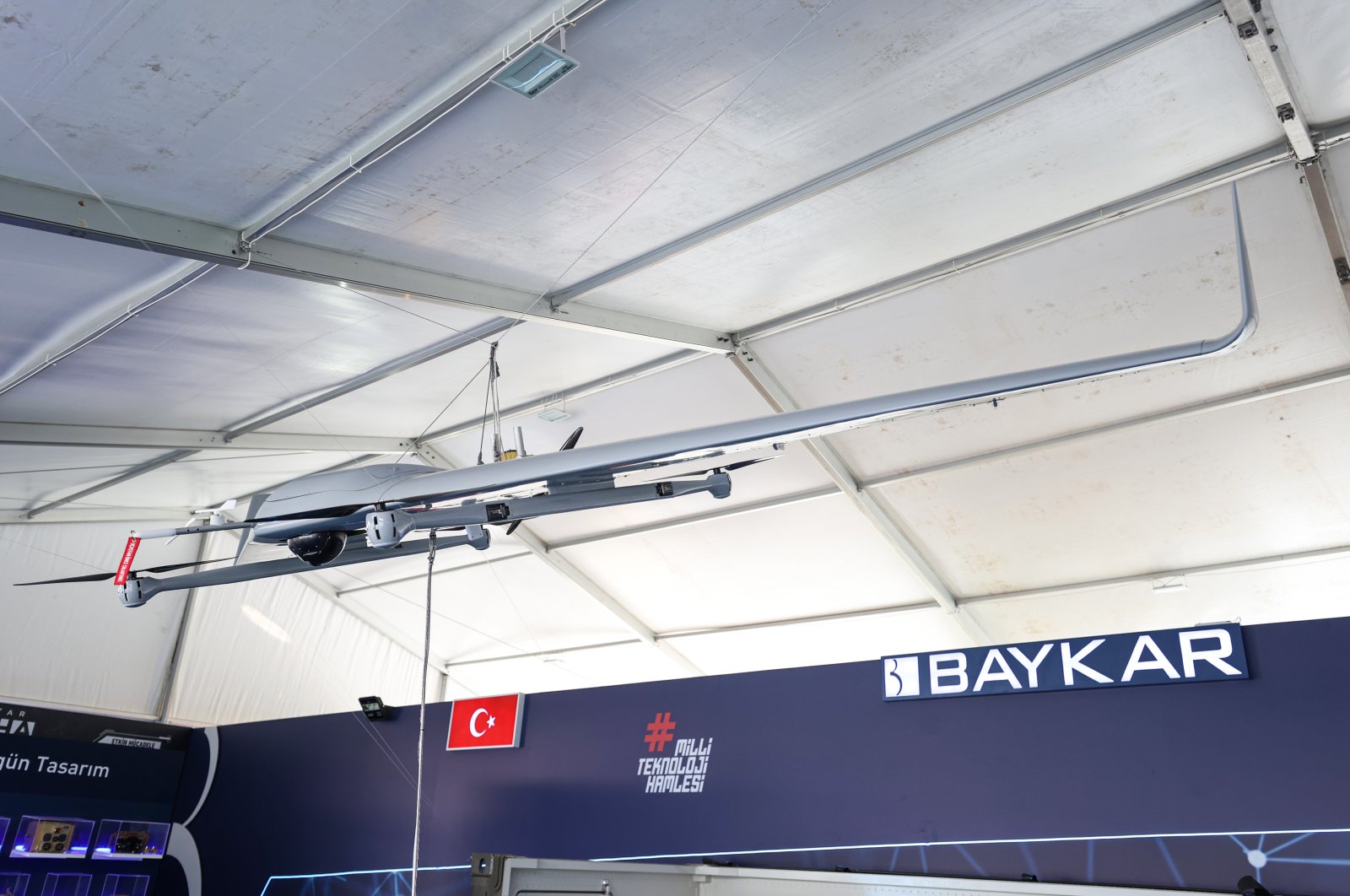 Leading defense company Baykar has unveiled for the first time its newly designed drone that can hover, take off and land vertically at Turkey’s largest technology and aviation event, Teknofest.

The flight tests of the vertical take-off and landing (VTOL) unmanned aerial vehicle (UAV) are due to be completed soon. Mass production and delivery phases are expected to start in 2022.

The new UAV does not need a landing track and can take off from several different places, including naval or mobile platforms, said Burak Özbek, an air vehicle design engineer at Baykar, which is already known worldwide for its landmark Bayraktar TB2 and Akıncı drones.

“We are currently completing flight tests, after which we hope that we will be able to see their mass production and delivery in 2022,” he said.

Thanks to its hybrid engine system, the UAV can fly up to 12 hours, the engineer said, adding that its engine can also charge the vehicle’s battery.

It has a take-off weight is 50 kilograms (110 pounds) and can carry 5 kilograms of useful loads, like thermal cameras, laser designators or distance meters, Özbek said.

The UAV is an observer drone and Baykar works with domestic and foreign partners on the systems installed in it, he said.

The company said that the tested UAV is equipped with an engine produced by Turkish engine maker Erin Motors.

This engine has an electronic fuel injection system, making it much more reliable, he said, adding that there are only a few similar UAVs in the world.

The UAV technology is in direct proportion to battery technology, he stressed and said its new versions have a higher capacity for carrying ammo.

Stressing that the avionics, electronic systems and software in this UAV have already proven themselves in the Bayraktar TB2 and Akıncı UAVs, he explained that Baykar uses the same systems for all of its vehicles.

One of the biggest aviation events in the world, Teknofest kicked off Tuesday, drawing thousands of aerospace and technology enthusiasts to Atatürk Airport.

The six-day event is hosting a range of activities, from air shows featuring warplanes, UAVs and helicopters, to seminars, summits, competitions and fairs.

The 2021 edition has seen some technology competitions take place prior to the main event. The festival features dozens of competitions in categories like smart transportation, helicopter design, biotechnology, robotics, flying cars, rockets and unmanned underwater systems.

Over 200,000 students in 45 teams applied for this year’s competitions, marking a significant increase from the previous three years.

Last year, the event was organized virtually in southern Gaziantep province due to pandemic measures. In 2019, some 1.72 million people visited the event in Istanbul.