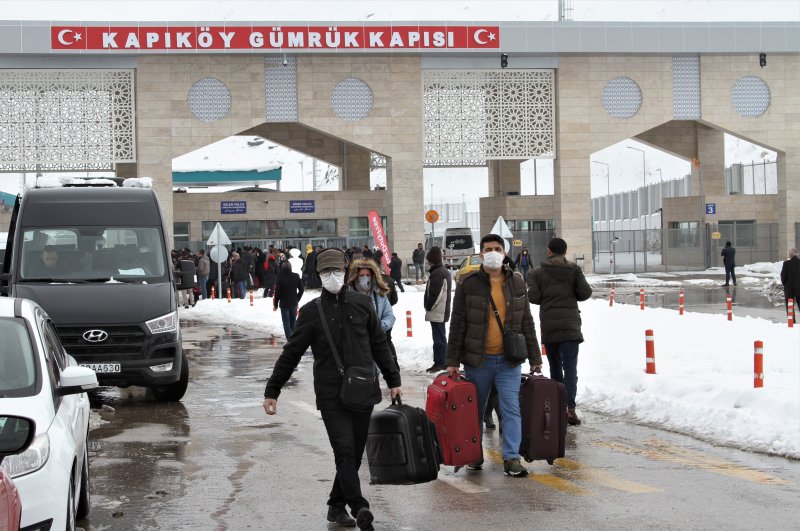 The border closure with Iran due to spreading coronavirus could particularly hit arrivals during Nevroz holiday in late March, when the largest number Iranians arrive in Turkey

Turkey's decision to close its borders with coronavirus-hit Iran may negatively impact several Turkish industries, primarily tourism, given the country is a key source of tourists for Turkey.

Earlier this week, Turkey closed its border with Iran and halted incoming flights as a precaution to stop the potential spread of coronavirus, shortly after Iranian officials reported the first fatalities from the virus in the country.

Tourist arrivals in Turkey saw their best-ever January figure as the numbers surged 16.1% year-on-year to 1.79 million. Iranians were fourth on the list, with a 6.7% share, the Culture and Tourism Ministry said Monday.

Given most Iranian tourists in Turkey arrive in March and April during the Iranian new year holiday in late March, the border closure could have a major impact on the tourism season, according to sector officials.

THY suspended all flights to mainland China until Feb. 29, while flights to Iranian cities, except Tehran, were also halted until March 10. The airline said the decision was taken "to prevent spread and limit the effects of the virus."

Meanwhile, budget carrier Pegasus suspended all flights to Tehran, its only destination in Iran, until March 11.

Iran's government said Tuesday that 15 people had died nationwide from the new coronavirus, the highest tally of deaths outside China, where the virus emerged late last year. On Monday, Iran's Health Ministry said 61 people had been infected and that around 900 other cases were suspected.

Afghanistan, Kuwait, Iraq and Oman also announced their first cases of the virus Monday and connected them to travel to Iran.

The viral outbreak that began in China has infected more than 80,000 people globally, killing over 2,600. The World Health Organization has named the illness COVID-19, referring to its origin late last year and the coronavirus that causes it.

The Turkish government is putting forth efforts to minimize the impact of the outbreak on the country’s tourism sector, said Culture and Tourism Minister Mehmet Nuri Ersoy, stressing this would be possible by further diversifying the market, which he said would eventually make the industry more resilient to these kinds of issues.

“There are global as well as geographical problems. Coronavirus is one of the biggest global threats in terms of tourism as well as tourist and passenger traffic. We need to create market diversity to be minimally affected by the virus,” Ersoy told Anadolu Agency (AA) Tuesday.

The minister said the country would implement additional action plans if necessary. “We have already commissioned two of them. Hopefully, they will make up for the losses. There may be a problem in February and March statistics but will recover as of April,” Ersoy said.

In a statement Monday, the Hotel Association of Tukey (TÜROB) said its assessment showed signs of a slowdown for February and March, despite the rise in the first month of the year. It said the hotel occupation rate in January had risen 6.4% from a year earlier to 61.9% but a decline in both this rate and room prices is expected in February and March.

The sharp rise in January was in line with the trend last year when Turkey’s tourism revenues rose 17% to $34.5 billion, a record high.

TÜROB Chairman Müberra Eresin said closing down the border would halt the movement during the Nevruz holiday.

Noting that tourism agencies could face serious losses, the Turkish Travel Agencies Association (TÜRSAB) Member of the Board Hamit Kuk said many agencies had already received the down payments for the holiday. “We have many Iran-oriented agencies. It could hit the agencies seriously,” Kuk noted.

The city has over the years become a top destination for Iranian tourists, especially during the Iranian national holidays.

“Van will suffer a serious loss of income if a solution is not found,” Aksoy was cited as saying by Turkish Dünya daily.

Van Trade and Industry Chamber (VANTSO) Chairman Necdet Takva also expressed his concerns, stressing that the situation will have potentially negative effects on the shopping festival organized specially for Nevruz every year between March 15 and April 5.

Takva even said sales in Van and surrounding cities could drop by up to 50%. “Up to 250,000 Iranians have been coming during the Nevruz holiday alone. They have been spending around $1,500 on average. Van and its surroundings could suffer a loss of up to $300 million,” he noted.

The uncertainty of border closure with Iran has also spiked fears among businesspeople, because the country is among Turkey’s top 20 export markets, even though the trade volume has been declining over recent years due to the embargo imposed on Tehran.

International Transporters Association of Turkey (UND) has established a crisis desk to evaluate the latest status of the trucks entering and exiting the border gates.

Iran stands as one of the most important countries in highway transportation. According to UND data, nearly 520,000 truck trips were made from Turkey to Iran in 2019.

Furkan Atakan, chairman of Yeni İnci, an underwear brand that makes 20% of its exports to Iran, said retailers weren’t expected to be affected by the latest developments.

“It comes at a time when purchases already stopped due to the Nevruz holiday. Iranian companies completed their purchases a month ago and will not make any purchases in the next month,” Atakan told Dünya.

“I think the situation will pull itself together in a month-and-a-half,” he added.