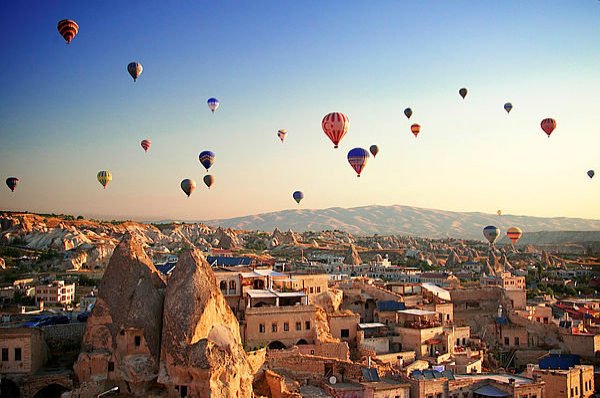 Upcoming security measures affecting the tourism and aviation industries foresee a shift in tourists' behaviors and tastes. Experts note that Turkey must adapt quickly to these to ensure its position as a popular destination

The post-pandemic outlook for the tourism industry, one of the sectors most strongly hit by the coronavirus crisis, sees various security concerns shape tourists' behaviors and preferences, according to leading figures in the sector in Turkey. Commentators argue that the country can therefore only secure its popular position in the industry by quickly adopting the much-needed changes.

Evaluating the upcoming process, HIS Travel Turkey General Manager Emre Özkur told Anadolu Agency (AA) Thursday that as a company based in Japan, a country in the same region as the virus' origin, they felt the effects of the virus all too quickly. One of the major problems facing the sector initially came with the cancelation of reservations as of January, a process which only accelerated after governments worldwide imposed travel restrictions to curb the spread of the virus, he said, noting that most cancellation requests came from Europe, which later became the next epicenter of the virus.

Özkur pointed to these first manifestations of the crisis as “the beginning of a process that will bring many changes.”

He exemplified one of those changes as an increasing trend toward solo travel in lieu of guided tours and packages.

“We expect that individual tour packages with contents providing experiences will come to the forefront in domestic and international tours,” he said.

Emphasizing that tourists would be more meticulous about isolation and health issues, Özkür noted that the pandemic also highlighted the importance of tourism firms that can protect customer rights.

Companies that establish a system aiming toward the protection of the rights of customers will stand out more, he said.

New standards for health in aviation

Some of the biggest transformations are set to rock the aviation sector, figures from the industry foresee, with new rules set to go into force.

Corendon Airlines Chairman Yıldıray Karaer noted that measures introduced following the COVID-19 outbreak would be the harbinger of new standards in the field, with hygiene rules enforced with particular diligence.

"We think that certain certifications will be required on flights. A number of new standards may come by the World Civil Aviation Organization," he said.

Karaer recalled that after 9/11, it was prohibited to carry any liquid in hand baggage and other new rules came into effect, such as having to show all the electronic devices at security checkpoints, adding that the outbreak could add yet more complicated rules for flying.

From now on, passengers could be tested to ascertain whether they were ever infected with COVID-19, he stressed.

Airlines worldwide, including major companies, suspended flights one by one especially after the virus spread across Europe, which was later declared the new epicenter of the outbreak by the World Health Organization (WHO), before the U.S., the current epicenter. Aviation companies across the globe, including Turkish Airlines (THY), have announced planned dates for resuming passenger flights, while cargo transit is continuing in various places.

Özkan Özbaş, deputy chair of Neredekal.com, a Turkish traveling and hotel reservations platform, said that the sector was already entering into a new process which has now gain momentum.

“The facilities that make a difference on the customer side may come to the fore. Hygiene may become more of a factor when it comes to hotel searches. Keywords such as ‘Antalya hotels that take precautions against the virus’ might be preferred. Therefore, operators, hotels and businesses that act according to these keywords will be at the top of the choices,” Özbaş said.

Özbaş also said that they expected isolated environments such as apartments, pensions, boutique hotels and villas to be more popular in the future.

Evaluating developments so far, Limak Tourism Group Chairman Kaan Kavaloğlu stated that the new rules may be seen in hotel administration in the coming period, ranging from increased room disinfection to the use of thermal cameras at hotel entrances.

“We may have both security-related camera systems and health-related checkpoints from now on," Kavaloğlu stated.

He highlighted that in line with those requirements Turkey should act quickly and prepare it's own "to-do list" to provide a secure touristic environment once this pandemic is over and to not fall behind its capacity.

"I think there may be some advantages in terms of the tourism sector in our country,” Kavaloğlu said, adding that people who were now under lockdown across Europe might see Turkey as an attractive destination after the outbreak ended and thus the country should be ready to introduce the newly formulated rules.

Turkey is preparing to launch an internationally recognized certification system for “coronavirus-free” touristic areas and facilities to revive the industry, the country’s tourism minister said earlier this week.

Minister Mehmet Nuri Ersoy noted that the industry would begin the recovery process in late April, starting with domestic tourism destinations, adding that the normalization of inbound tourism would be possible by the end of May.

Meanwhile, Erol Türk, board chairman of the SAN TSG, a company operating in tourism technologies software, said that a certain percentage will shift to individual reservations instead of package tours.

Transfers with individual vehicles instead of mass bus transfers might also be preferred, he said, noting that Turkish tour operators should offer tour packages with the new measures included.